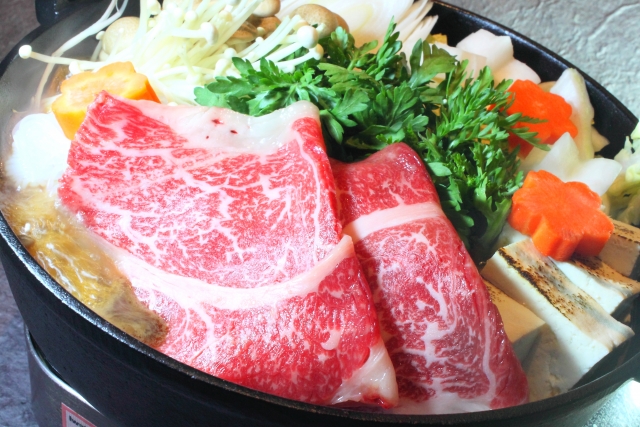 Sukiyaki is a modern addition to Japanese cuisine, which emerged at the end of the Edo Period (mid-1800’s). When Buddhism was introduced to Japan, the killing of quadrupeds for food was officially prohibited, and people refrained from eating meat. Animals such as cattle and horses were working animals, and people believed there would be negative consequences for killing them. In reality, however, poor people continued to eat wild animals such as wild boars and deer. People sneakily started eating beef again, and at the end of the Edo Period, the first restaurant specializing in “Gyu-nabe (Beef Pot)” was established in Kyoto. At that time, ordinary people were not used to the smell of the meat, and they passed by the restaurant with their noses pinched and eyes closed.

During the Meiji Period, sustained contact with the West and Western cuisine eventually relieved the taboo of eating meat. The Meiji era political leaders decided that the diets of those directly involved in the Japanese military and industry should be changed, in order to achieve national prosperity and military power as a developed country. They began promoting meat in an effort to increase the size and strength of ordinary people. Thus, sukiyaki gradually became a common meal among Japanese people.

In the Kansai District, the dish was called “sukiyaki,” as it is called today, but in the Kanto District the dish was called “gyu-nabe,” and it became tremendously popular among common people. In the Great Kanto Earthquake of 1923, however, the gyu-nabe restaurants were destroyed and had no choice but to close. Sukiyaki restaurants from Kansai started doing business in Kanto then, and so, Kansai-style sukiyaki spread around the Kanto District. As time went by, Kansai’s sukiyaki and Kanto’s gyu-nabe were combined, and a new Kanto-style of sukiyaki, using warishita (a mixture of dashi broth, soy sauce, mirin sweetened sake and sake for the soup/dipping sauce), was born.

Sukiyaki is now known worldwide. The song “Ue Wo Muite Aruko,” a smash hit of Kyu Sakamoto in the Showa Period, is known under the alternative title, “Sukiyaki,” and it is the only Japanese song that has ever reached the top of the Billboard Charts in the United States.

The name “sukiyaki” refers to the time when fish and tofu were grilled outdoors by hungry farmers in the Edo Period, using a ploughshare instead of an iron plate. There are other opinions on the origin of the name, too. One is that the word “sukiyaki” comes from the word “sukimi,” which means thinly sliced meat.

Sukiyaki is a typical, contemporary Japanese dish featuring meat, and it is one of the most popular, one-pot style dishes among Japanese people. It is prepared by simmering thinly sliced beef, vegetables such as spring onions, and tofu, among other ingredients, in a shallow iron pot and seasoning them with soy sauce and sugar. When the food is cooked, people take it directly from the pan. Just before eating, the cooked sukiyaki is dipped in a small, individual bowl of raw, beaten egg. 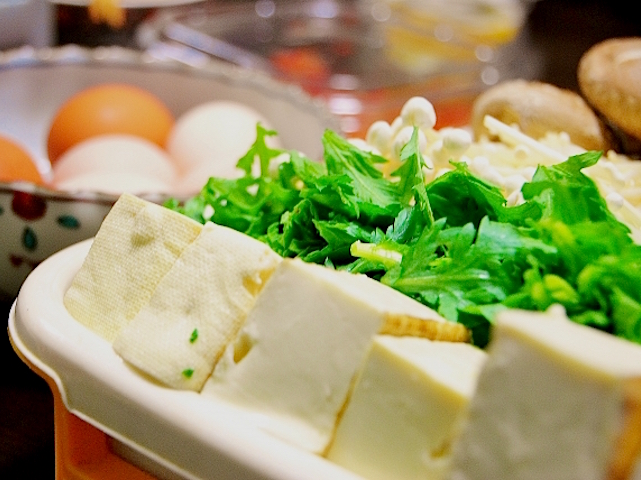 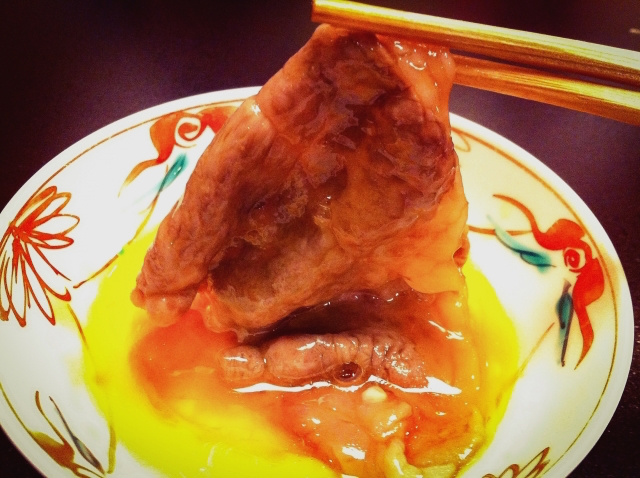 The way of cooking sukiyaki is so different between Kanto and Kansai that an intermarried couple might quarrel about it. In Kanto-style, sukiyaki is prepared by pouring a specially blended sauce made with mirin (sweetened sake), soy sauce, sake, sugar, and other things, into the pot and then cooking the sliced meat and vegetables together. The Kansai method is to grease the pot and cook slices of meat, seasoning them with sugar, soy sauce and sake, first. Vegetables are added after that, and then stewed. Warishita (a special broth blend) is not used, so when the sukiyaki has boiled down, some water or sake is added. In the beginning, miso was also used as a seasoning, but as people got used to the smell of beef, it became no longer necessary.

Beef is the most common meat used for sukiyaki, but chicken and pork are equally good. Horsemeat is sometimes used, too. Other typical ingredients include: grilled tofu, spring onions, onions, shungiku (garland chrysanthemum), Chinese cabbage, shiitake mushrooms, enoki mushrooms, shirataki (noodle-like devil’s tongue), wheat gluten, and more. Seasonal ingredients such as matsutake mushrooms and bamboo shoots are sometimes added, too. A few restaurants serve cotton candy instead of sugar for seasoning. Sometimes udon noodles are added to round off the meal.

Originating in Osaka, udon-suki is, literally, a hot-pot that centers on udon noodles. It is prepared by simmering udon noodles in a broth (made with bonito, soy sauce, mirin sweetened sake, and others), with a variety of ingredients, including chicken, sea eel, prawns, and hamaguri clams. People also like to add seasonal ingredients like seaweed in the spring, conger pike in the summer, and matsutake mushrooms in the autumn. The udon noodles are relatively thick, as they are simmered for a long time, and their smooth texture is essential to the finished product.

Uo-suki is fish-based sukiyaki. Slices of fish (sea bream, Spanish mackerel, amberjack, prawns, squid, sea eel, etc.) are marinated in a special sauce, and then put in a small pot into which dashi broth is poured. Simmer slices of fish and dip them in beaten raw egg before you eat. Other ingredients include vegetables such as shungiku (garland chrysanthemum), mitsuba (Japanese honewort), green onions, noodle-like devil’s tongue and grilled tofu. To enjoy the dish to the fullest, put slices of fish into the broth one at a time, and eat them as soon as they are ready, taking care not to overcook the fish.

Torisuki is a typical local dish in Kyushu, where superior-tasting breeds of chicken are produced. A specially prepared sauce made with soy sauce, mirin sweetened sake, and dashi stock is put into the sukiyaki pan, and then chicken, vegetables such as Chinese cabbage, spring onions, shiitake mushrooms, firm tofu, and, finally, udon noodles are added to be cooked. The sukiyaki tastes mild after being dipped in beaten raw egg. Additions of rice and eggs to the pot at the end of the meal rounds out the dish nicely.

Crab meat, Chinese cabbage, spring onions, mitsuba (Japanese honewort), enoki and shiitake mushrooms, plus, other vegetables and tofu, are cooked in a strongly seasoned dashi broth made with bonito flakes and konbu (kelp).

Thinly sliced shabu-shabu meat and vegetables are put into a thinned and simmering sukiyaki warishita sauce for a few seconds, and then dipped in raw, beaten eggs. Suki shabu tastes like sukiyaki, but the way it is cooked is in the shabu-shabu style.