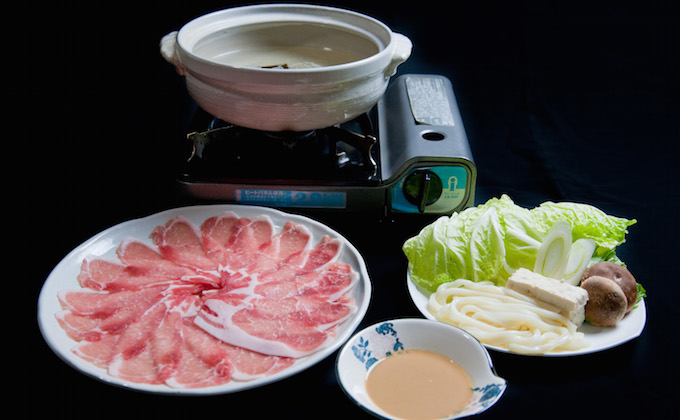 The History of Shabu Shabu

When did shabu shabu begin appearing on menus? Shabu shabu was invented by Shoya Yoshida, a doctor from Tottori Prefecture. He joined the mingei (Japanese crafts) movement, which started at the end of the Taisho Period (1912-1926), and established the Tottori Folk Crafts Museum in 1949.

Yoshida, who built the foundation for the crafts movement in Tottori, was dispatched to Beijing, China, as an army surgeon during World War II. There, he happened to try a hotpot dish called shuan yan rou. In Chinese, shuan means “to rinse.”

Diners would eat thin slices of lamb by first swishing them in hot broth, and then dipping them in a sauce. This is a typical Beijing dish eaten in winter. After returning to Japan, Yoshida lived in Kyoto for about 2 years, and introduced the dish, shuan yuan rou, to a chef at a restaurant. He also helped the chef develop the dish as a menu item. At that time, it was difficult to find lamb, so beef was used instead. The seasoning was also changed to better suit the Japanese palate. Broth was made from konbu seaweed, and the ingredients and dipping sauce were modified, too. In this way, the prototype of shabu shabu, “Beef Mizudaki” (literally: cooked in hot water), was complete by the autumn of 1946, right after the end of the war.

What kind of dish was shuan yuan rou originally? It was prepared using a unique copper pot called a huo guo zi. The pot is donut-shaped, with a “chimney” in the hole where charcoal is placed. Thinly sliced lamb, vegetables such as Chinese cabbage, harusame noodles, and dumplings were swished in the hot water. Cooked ingredients were then dipped in a sauce made from Zhimajiang sesame paste, soy sauce, chili oil, preserved bean curd, and other things. At the end of the meal, noodles are cooked in the remaining broth and eaten. The history of this dish can be traced back to Mongolia (Inner Mongolia).

The winter in Mongolia is severe. One theory claims that shuan yuan rou originated from the practice of cutting frozen meat into slivers and defrosting it with hot water to eat. Later on, the dish was brought to Beijing, and the surrounding area, by immigrants to China. Once the dish was brought all the way to Japan, it gained popularity as “shabu shabu.”

What is shabu shabu?

Shabu shabu is a typical Japanese hotpot dish featuring beef, similar to sukiyaki. One- or two-millimeter-thick slices of quality beef are prepared on a platter at the table. These slices are swished in the boiling broth one at a time, until the color of meat changes (about 3 to 4 seconds). They are then dipped into a soy-based or ground sesame sauce, and eaten.

The “godfather” of shabu shabu is the previous owner of “Eirakucho Suehiro Honten,” a restaurant in Osaka. Beef steak was the signature menu item there, but two years were spent developing meat dishes which have a lighter taste than steak, and which would enable guests to consume good quality protein more effectively. Eventually, they came up with a dish served with an aromatic sesame sauce. When they were struggling to name the dish, the owner heard a waitress washing and rinsing hand towels, and liked the sound very much; thus, the idea that shabu shabu is beef “rinsing” sprang to his mind. In 1955, a Japanese cuisine restaurant featuring shabu shabu was opened, and that popular dish spread from the Kansai District to Kanto. In 1958, shabu shabu became a registered trademark in the name of Suehiro–no-Shabu Shabu (Suehiro’s Shabu Shabu), as it is to this date.

Shabu shabu is now prepared not only with beef, but also pork, chicken and seafood such as crab. There is also shabu shabu of lamb. 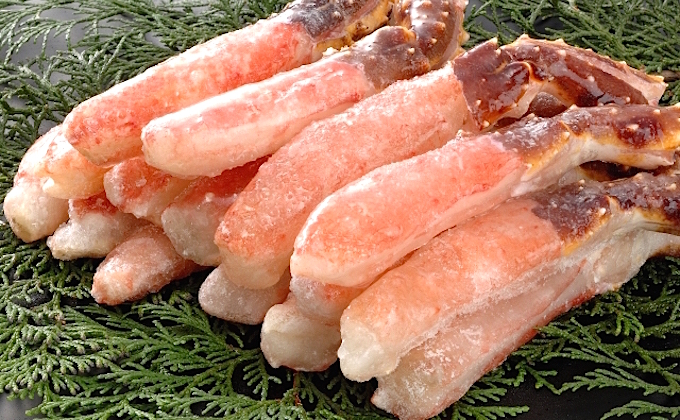 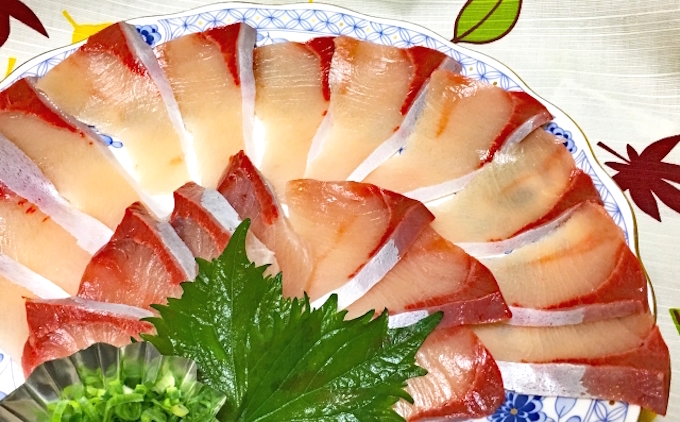 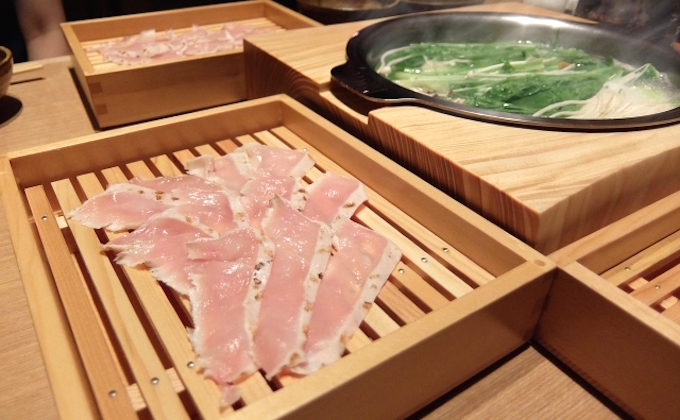 How to Eat Shabu Shabu

・Once the broth reaches a boil, swish a slice of meat in it and eat it. Be careful not to overcook the meat. It tastes best when the color is slightly pink. When cooking pork or chicken, swish the meat longer than beef. Eat cooked meat with plenty of dipping sauce and condiments. For soy based sauce, grated Japanese daikon radish, red chili and Japanese chives are good as condiments and for a sesame based sauce: chili oil, grated garlic, and the like are good.

・After some slices of meat are cooked and the flavor of the broth has developed, place vegetables in the pot in easily consumable amounts. Put the tougher ones or ones that provide a lot of flavor (e.g. shiitake mushrooms and/or carrots) first.

・Skim any foam off the top of the broth to keep it clear, because the scum causes odor.

・When the meat and vegetables have been eaten, add udon noodles or rice to the broth to complete your meal. 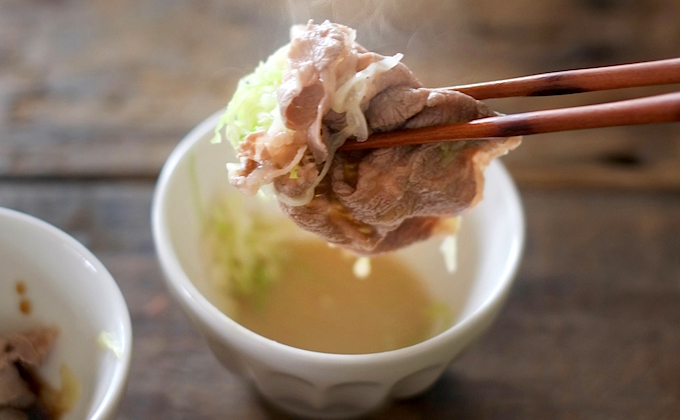 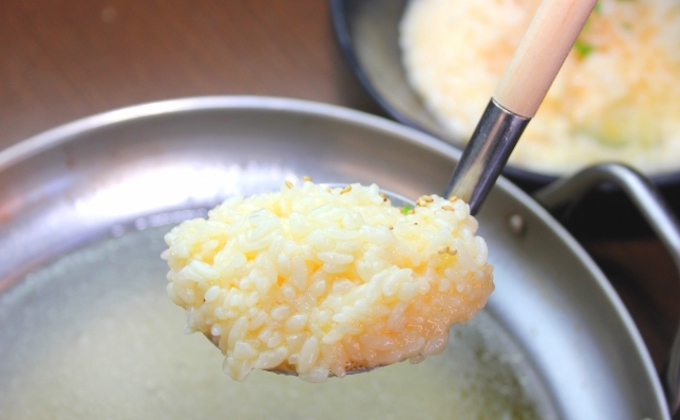 Add rice to complete your meal. 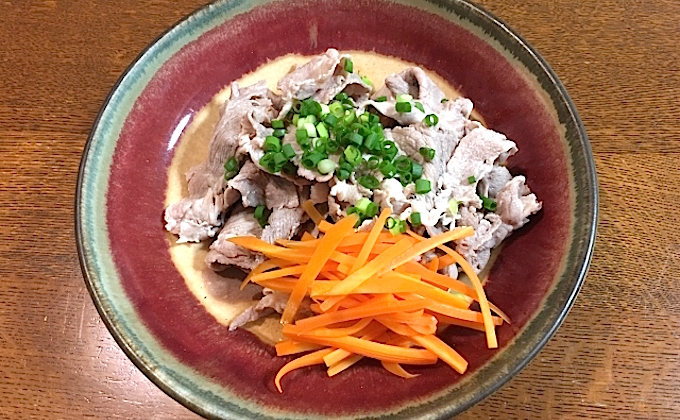 Swish slices of meat briefly in the boiling broth, then transfer them to ice water to chill. Rei-shabu is mainly eaten in summer. Put cooked and chilled meat on vegetables, and you may enjoy it like a salad.

Paper-thin slices of meat are grilled briefly before being dipped. By searing only the surface, the flavor stays locked inside and the meat becomes tender and juicy. Yakiniku grilled meat offers a rich flavor, while yaki-shabu has a more delicate flavor.

Thinly sliced meat for shabu shabu is cooked in the warishita sukiyaki sauce. It tastes like sukiyaki, but is prepared in the shabu shabu style.