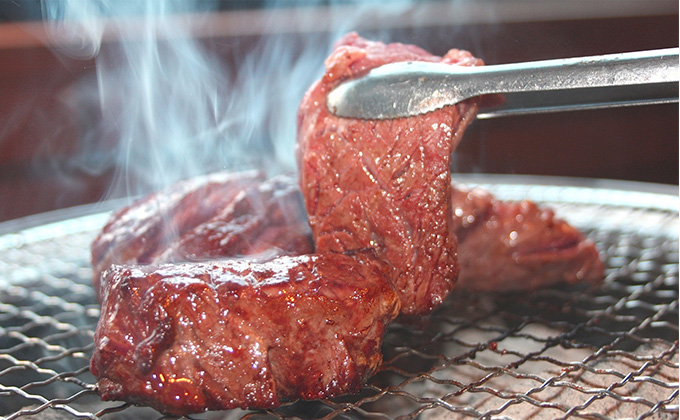 It is said that yakiniku (grilled meat) culture first blossomed after World War II. There is a commonly accepted theory on the birth of Yakiniku. It states that the origin of yakiniku is “horumon-yaki” (grilled beef or pork offal) which is considered to have been introduced by Koreans in Japan.

In the days of severe food shortage after the war, Koreans in Japan who were good at using meat, obtained the beef and pork innards that Japanese people discarded, and opened stalls in the black market. Here, after being grilled over an open fire, they were served and grew popular. Theory has it that later, at these Horumon-yaki stalls, loin and short ribs came to be used, and that they eventually developed into present-day yakiniku restaurants.

But there is another theory that challenges this idea head-on. Several documents show that, before the Meiji era and mainly in mountainous regions, Japanese ate meat from birds, wild boars, etc. after grilling it over an open fire. So, even in prewar days, there were stews with innards and grilled innards on skewers, using beef or pork offal. It is also written that, in the 1930s, the style of “grilling and eating meat on the spot,” such as grilled short ribs and sukiyaki-style bulgogi (a Korean dish of grilled beef), which were popular in Seoul in those days, was already being introduced in Osaka by Korean immigrants. This goes against the common theory that yakiniku was born after the war. The latter theory does not deny the possibility that Korean-style yakiniku was eaten only among the immigrants, but yakiniku cuisine was actually covered by a newspaper in the early 1930s. It is estimated, also, that in the prewar days, something like Korean barbecue was imported, and yakiniku had a certain degree of recognition. What’s more, this theory has it that the prototype of present Japanese yakiniku restaurants was established in the mid-1930s.

Soon after the war, what is considered the very first yakiniku restaurant (whose style persists even today) went into business. In the 1950s the present form of yakiniku restaurants is thought to have appeared, and it seems that the style of choosing and eating various parts of meat was already in practice. In a period of high economic growth, from the late 1950s till the 1960s, yakiniku spread from cities like Tokyo and Osaka to various parts of Japan, and, practically overnight, became a popular menu. What prompted this quick rise was the development and sale of yakiniku sauces! Enabling people to enjoy yakiniku at home easily, these sauces gave birth to the “Tsuke-dare” (dipping sauce) culture, unique to Japan, in which people grill unseasoned meat and dip it into sauce before eating. This way of preparing and eating meat reduced burning and smoke, and made yakiniku more acceptable in ordinary homes. In 1970, the electric griddle came into being and its use spread rapidly, making yakiniku an even more popular household menu.

Another thing: the smokeless roaster came into being. Until then, yakiniku restaurants were usually filled with smoke, but the invention of a roaster that absorbs smoke helped restaurants succeed in attracting women and families as customers, too. In this way, the present style of yakiniku restaurants was finally established, and the Japanese way of eating yakiniku, using dipping sauces and the smokeless roaster, has now been reimported to South Korea.

Yakiniku is a dish you eat while grilling meat (beef, pork, etc.) on an iron plate or a gridiron placed over a fire. Vegetables and seafood may also be grilled at the same time, but all these grilled things are collectively called “yakiniku.” Beef is mainly used for “yakiniku,” and a wide variety of parts are eaten, including short ribs, sirloin and tongue, as well as organ meats like tripe. At yakiniku restaurants they provide not only animal flesh such as pork, chicken and lamb but also Vienna sausage, fishes, shellfishes and vegetables. They offer abundant side dishes such as Korean-style rice and noodles, too. By the way, grilled lamb dishes (Mongolian mutton barbecue) are called “Genghis Khan” in Japan. 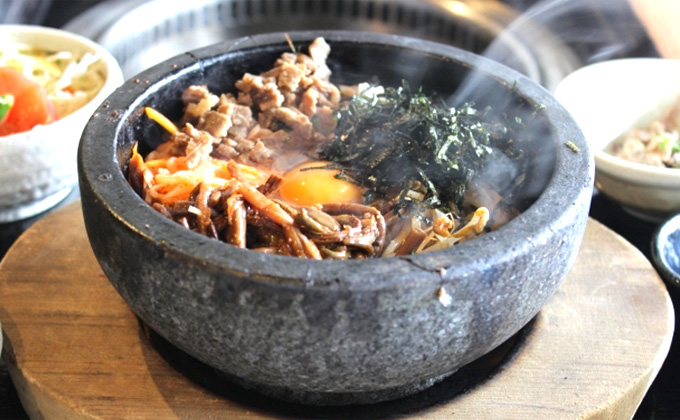 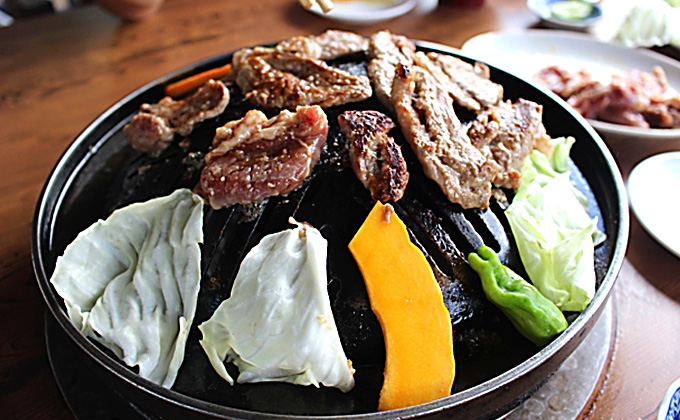 Sauses
There are various kinds of sauces such as ones based on soy sauce, salt, miso and citrus fruits (lemon, sudachi citrus, etc.). There are two types of sauces: sauces for immersing and seasoning meat beforehand; and ones for dipping meat after grilling.

How to Eat Yakiniku 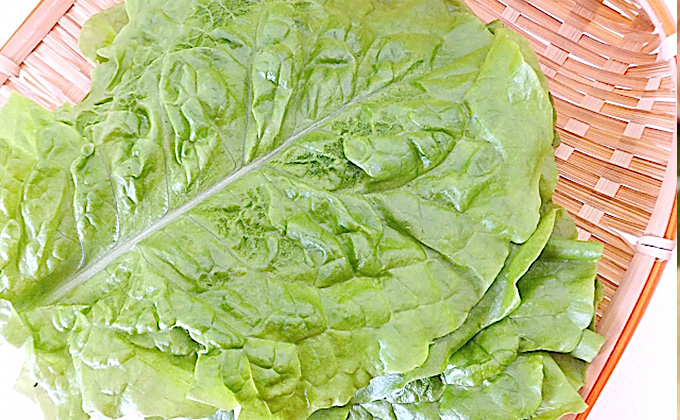 Heat the gridiron (or iron plate) fully. If you put meat on before it is hot enough, the meat may stick to it and break off when you pick up the meat. Put tongue on the gridiron first. It is usually eaten with salt without adding any sauce, so it does not burn easily. Put other kinds of meat on the gridiron. When the meat juice has begun to ooze, turn it over. When it has been cooked properly, eat it, wrapping it in such leaf vegetables as sangchu (Korean lettuce) if you like. 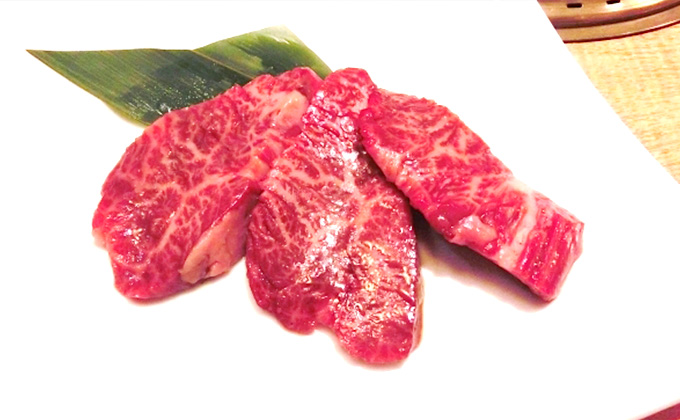 The middle part of the shoulder. A rare part which accounts for a shade of the whole body. You can enjoy its high-quality sweetness and flavor. 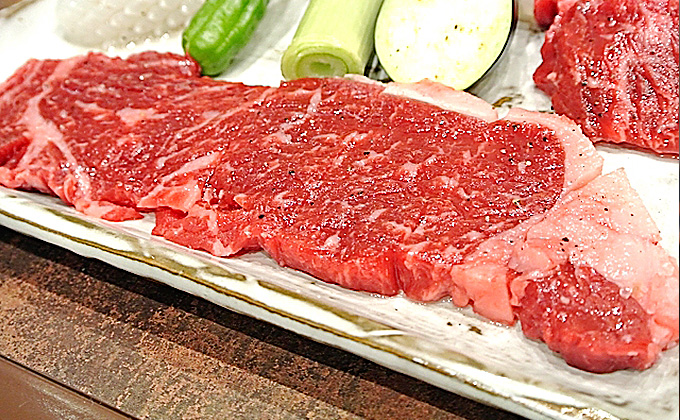 A sweet and tender part with a lot of marbling. It is frequently used as steak meat. 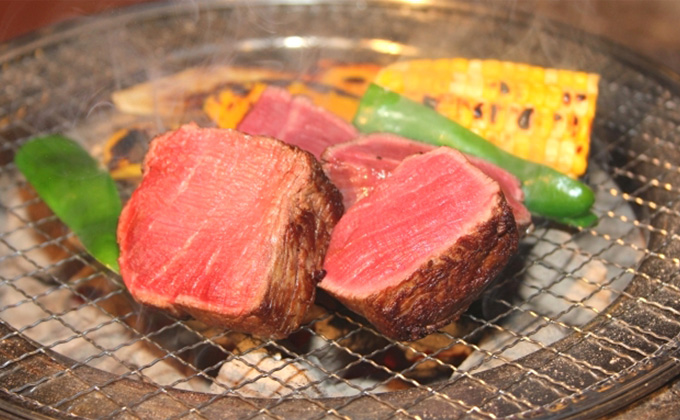 The inner part of the sirloin spine is thin, long and muscular. It is regarded as high-class, as it accounts for a just a shade of the whole body. It has scarcely any marble-like patterns of fat, and it is tender, but lacks sweetness.

This part contains a lot of sinew, but it has a moderate amount of fat and a lot of rich flavor, as well as a fine texture.

A cut of beef between the fat back and sirloin. It has a fine and tender texture, and you can enjoy the rich flavor of fat.

The part around the ribs has a thick taste. You can enjoy the flavor and aroma of fat.

Tender red meat without much fat. This part can be recommended as fit for roast beef.

This part is a little tougher than top round, and mostly red meat. It is best fit for stewed dishes.

Because this part of the body is moved frequently, it contains a lot of sinew and little fat. Simmering it slowly makes it tender and brings out its rich flavor.

A large expanse of tender and juicy red meat between the waist and the buttocks. It is valued as a red meat and a high-quality part used for yukhoe. Tender and succulent.

This precious part that accounts for a blade of the whole body is loved by “gourmets.” It is an elastic part with the sweetness of marbled meat as well as the flavor of red meat.

Some people like the peculiar flavor of liver while some don’t. It is rich in vitamin A and iron, and nutritious.

A muscular part of the diaphragm, it is tender and rich in fat. It looks like red meat, but it is organ meat and, therefore, healthy. 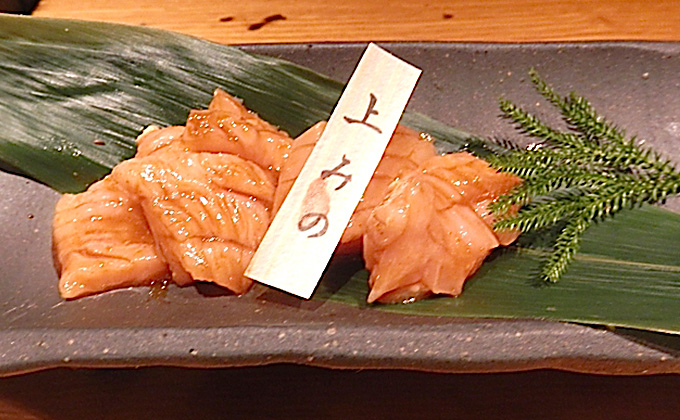 The first stomach is thick and almost pure white. It has a crunchy texture and a light flavor. 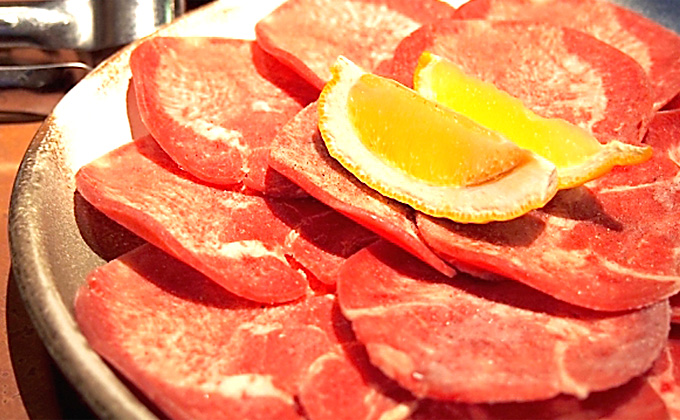 Beef tongue is a tender, fatty part. Fresh tongue can be eaten raw as sashimi. 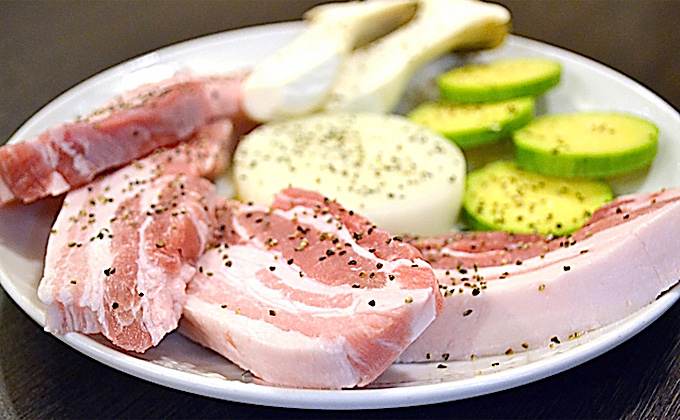 A part of pork with the thick flavor of fat. Pork belly with bones is called spareribs. 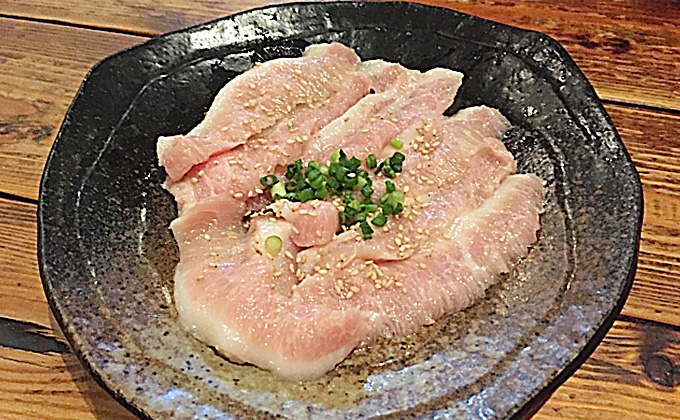 The neck part of pork is a precious part that accounts for just a blade of the whole body. It has a light taste and a crunchy texture. 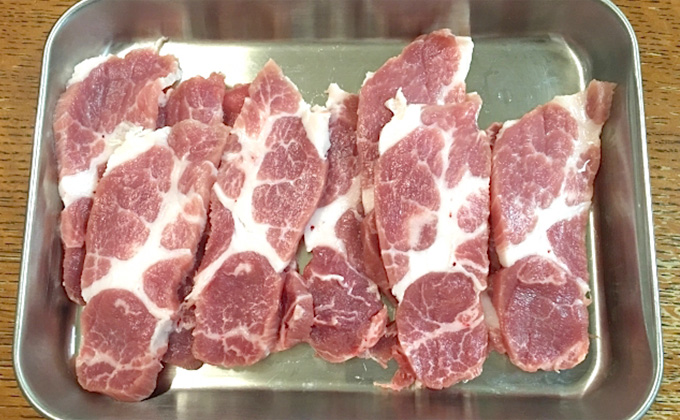 This part has a rather coarse texture, but a thick, rich taste. When cooking, don’t forget to cut up the sinew between the red meat and fat.

Pig’s feet are frequently used for stewed dishes. They are rich in proteins like collagen.

A part of pork with a rather coarse texture, it is muscular and a little tough, but flavorful. Fit for stewed dishes.

A precious part that accounts for just a blade of the whole body. It is a tender, high-quality part with a fine texture and little fat.

A tender part of pork close to the buttocks. It contains little fat and has a plain taste.

This tender meat, with a fine texture and a moderate amount of fat, is said to be the most delicious of all pork. The fatty part at the edge has a condensed flavor.

Pork tongue has a more refreshing flavor than beef tongue. The root part is fatty and tender.

A rather tough part of pork with a unique crunchiness. It contains little fat and has a plain taste, but it is rich in vitamins B1 and B2 and iron.

Chicken breast has a light flavor, little fat and no unpleasant smell.

Chicken thigh is fattier and tougher than breast. It has a rich flavor.

Breast tender contains the least fat of all parts of chicken. It has a plain taste and is tender and moist even after it is cooked.

Chicken wings have a lot of gelatin and fat. They are tender with a thick flavor.

Offal such as the gizzard, heart and liver is collectively called “motsu.” While they do contain a lot of vitamins and iron, be careful because they go bad easily.

Because chicken skin contains a lot of fat, it is high in calories. It is also rich in collagen.

Chicken heart is part of the innards, but it has a plain flavor and a chewy texture.

There are 2 kinds of gristle―the knee parts and the heel. You can enjoy the crunchy texture.