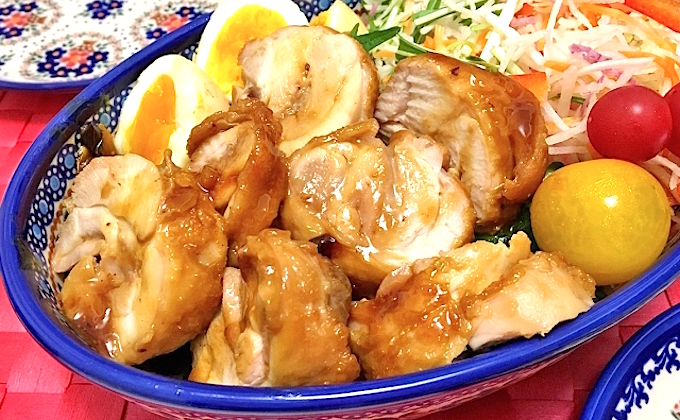 Mirin is made from glutinous rice, rice koji mold and shochu (Japanese distilled spirits) or alcohol. Mirin is prepared by mixing steamed glutinous rice and rice koji mold, and then adding shochu to the mixture. After pressing, it is left to sit for 6 months to 1 year. During that time, the enzyme contained in rice koji mold works to dissolve the starch and protein in the rice, and the pressed mixture produces various sugars, amino acid, organic acid, aroma components and the like, resulting in the unique flavor of mirin. Mirin has an alcohol level of around 14%, with a mellow and deeply sweet taste. 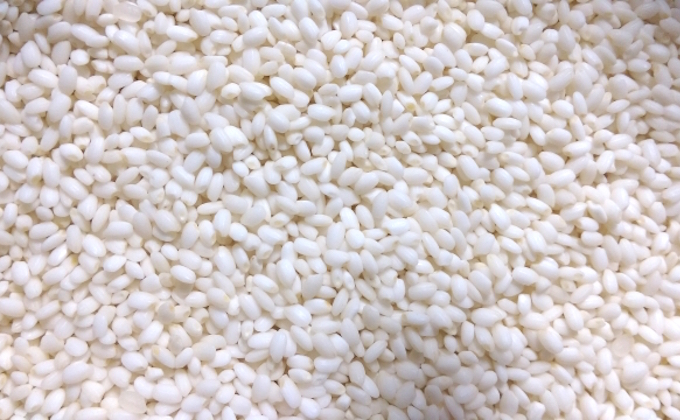 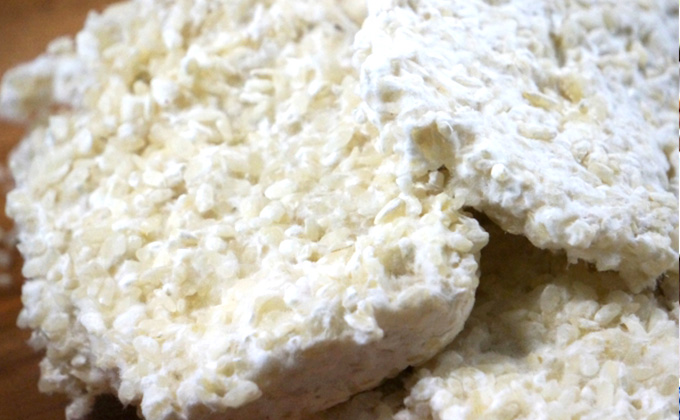 Mirin can make food more delicious, and it also has various aesthetic effects on dishes.
1. When seasoned with mirin, the dish will have a soft, sophisticatedly sweet flavor, because the sweetness of hon-mirin consists of multiple sugars such as glucose, oligosaccharide, and others.

2. The sugars in hon-mirin work effectively to make nice glazes and sheens on the surface of dishes. Neither sake nor sugar can be substituted for mirin.

3. The sugars and alcohol in mirin help ingredients maintain their shapes, so the dish can be finished beautifully, while, at the same time, keeping the flavor contained.

4. Umami (savory) components produced from glutinous rice, such as amino acids and peptides, sugars and other compounds, intertwine to generate deep richness and flavor.

5. The alcohol present in mirin soaks into the ingredients quickly, bringing the umami components with it. Thus, dishes can be seasoned quickly and evenly.

6. Mirin works to remove odors, ridding fish and meat of their strong smells. Also, when heated, the fragrance of mirin becomes stronger, and alcoholic compounds, when burning off, clean the odor away.

7. When the sugars and amino acid contained in mirin are heated, they result in a beautifully browned dish.

The History of Mirin

There are several theories about the origin of mirin. One claims that it was brought to Japan from China. According to old documents compiled during the Qing Dynasty, there was a sweet alcohol called “milin.” In Chinese, lin means “to drench,” and so, it is interpreted as a sweet, honey-like alcohol. This milin was introduced to the Ryukyu Islands and Kyushu District of Japan in the Sengoku Period (1491-1573), and was renamed while its use spread across the country. It has developed over time into the current form of mirin we know now.

A book written in 1649, says that mirin was imported from abroad, but another theory claims that mirin was invented in Japan. From ancient times, sweet alcoholic beverages such as nerizake (kneaded sake) or shirozake (white sake) have existed. A document in 1466, states that there was a sweet alcohol called nerizake in Hakata, Fukuoka. These varieties of sake spoiled easily when rice or koji mold was added to them, because the percentage of alcohol was lowered. Therefore, shochu was added as a preservative. This shochu-supplemented sake was improved upon until it became the mirin we know today.

In the middle of the Edo Period (1603-1867), people began consuming mirin as a sweet sake that women and non-drinkers could enjoy, and it began to be produced within Japan. The mirin at that time was not sweet enough, however. The sweetness in mirin is produced by koji mold, which converts rice starch into sugar, and the technology to produce koji mold was not fully developed at that point. Mirin, which was widely consumed as a sake for common people, gradually turned into a seasoning used to maximize the rich and savory tastes of food dishes.

Around 1760, Japanese restaurants, such as grilled-eel restaurants or soba buckwheat noodle restaurants, began flourishing, and the current forms of Japanese cuisine and kaiseki multi-course cuisines were completed. A book written at the end of the Edo Period clearly describes that mirin was used as both a glaze for grilled eel and in a dipping sauce for soba noodles in the Kanto District. This indicates that mirin had become an essential seasoning by then.

From the Meiji Period (1868-1912) to the prewar era, mirin was found in some ordinary households, but remained a luxury seasoning for the majority of people and was mostly consumed at Japanese restaurants. From the mid-1950’s to mid-1960’s, there was a large tax–cut on mirin and that helped it spread among common people to become a typical Japanese seasoning. 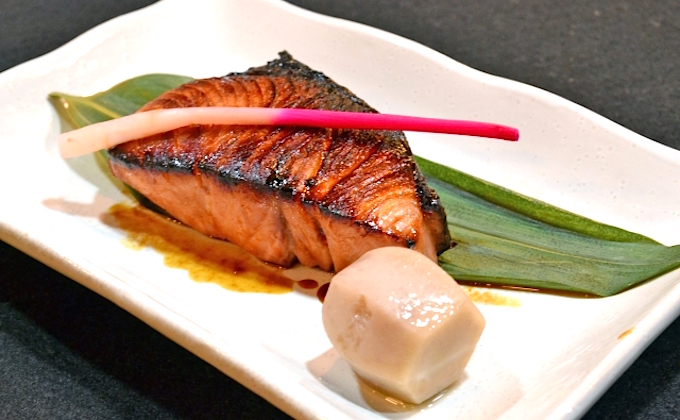 Teriyaki is a dish of meat or fish grilled with a glaze of sake, soy sauce and mirin. Mirin can give the dish a nice sheen. The most typical teriyaki dishes include yellowtail teriyaki and chicken teriyaki. There is also burger steak teriyaki. 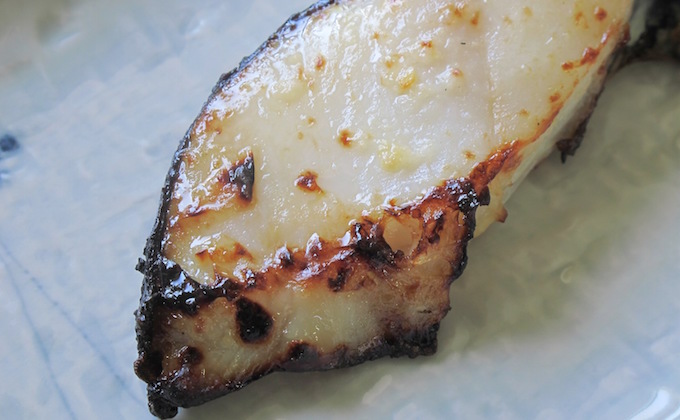 Saikyo-zuke is miso marinated fish. Slices of fish are salted and pat-dried, and marinated in a mixture of sake, mirin, sugar and Saikyo miso. Saikyo miso is “white” miso bean paste produced mainly in Kyoto, and it features a pale yellow color. Saikyo-zuke yaki is grilled saikyo-zuke. 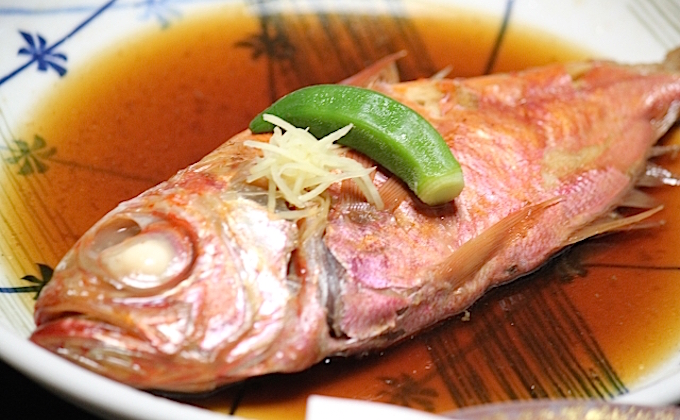 Nizakana is a dish of fish simmered in water, sake, sugar, mirin and soy sauce.The most typical nizakana are made with flounder, alfonsino, and heads of sea bream.Other common nizakana menus include: buri-daikon, simmered yellowtail with daikon radish; saba no misoni, mackerel simmered in miso bean paste; and iwashi no shoga-ni, sardines simmered in soy sauce with ginger. 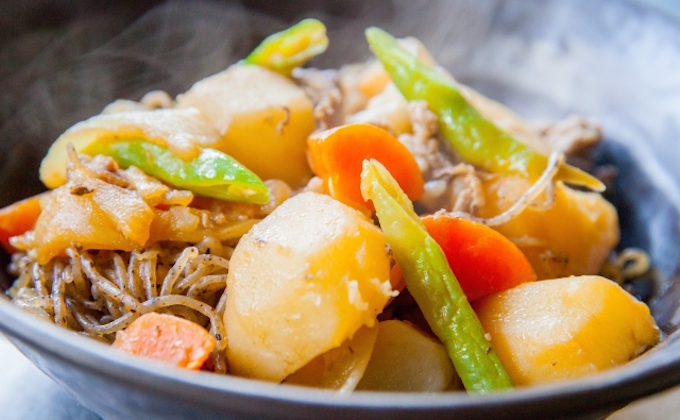 When it comes to Japanese moms’ cooking, nikujaga always ranks at, or near, the top. Slices of meat and chunks of potato are sautéed and drenched in dashi broth, then simmered and seasoned with soy sauce, sugar and mirin. In Kanto, pork is usually used for nikujaga, but beef is the choice in Kansai. Nikujaga sometimes contain onions, carrots, and konnyaku (devil’s tongue) noodles, too. 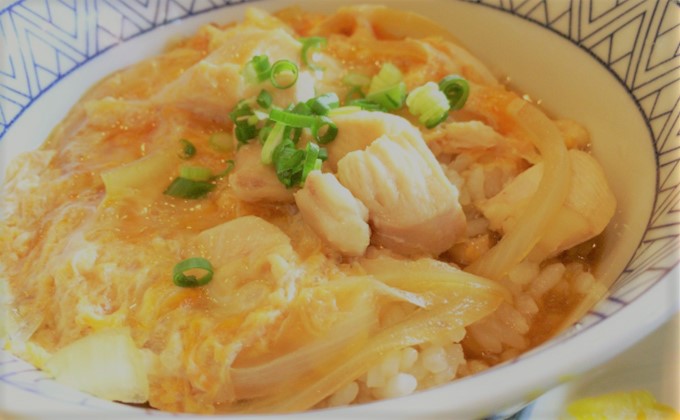 Oyakodon (chicken and eggs over rice)

Oyakodon is chicken simmered in dashi broth, soy sauce, sugar and mirin. Beaten eggs are then poured over the chicken, just before finishing, and simmered until the eggs are softly set. The mixture of chicken and eggs is laid over boiled rice. Oyakodon is popular, especially among women. 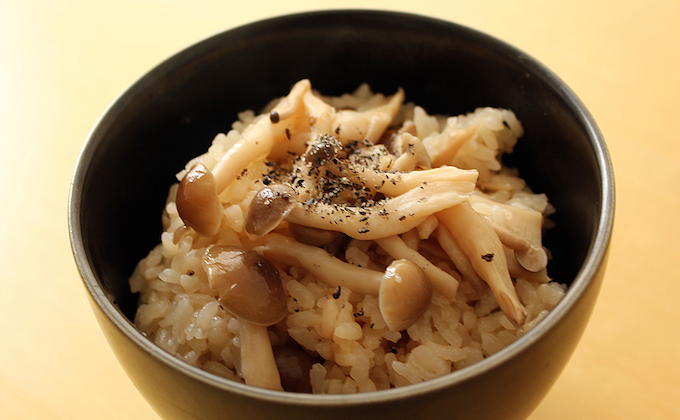 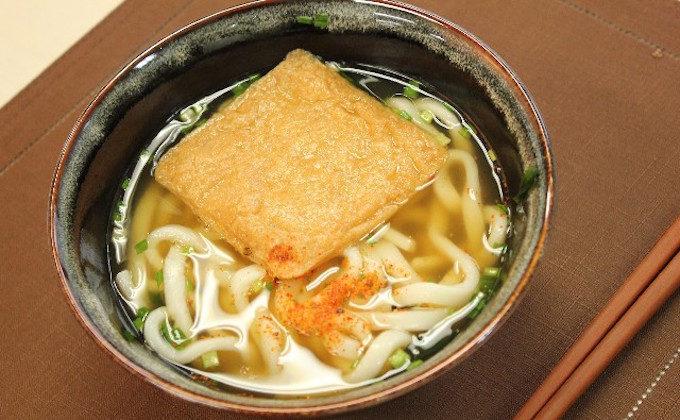 Kitsune udon is a dish of udon noodles served in a hot dashi broth seasoned with salt and soy sauce. It is then topped with abura-age (deep-fried tofu) boiled down in water, soy sauce and mirin. Kitsune udon is one of the most popular udon dishes, and usually the first one that comes to mind when thinking of udon. 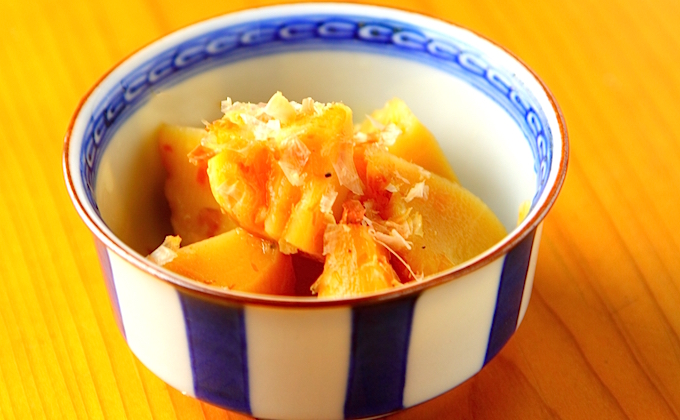 Takenoko no tosani is one of the typical spring dishes of Japan, made by simmering seasonal takenoko bamboo shoots with soy sauce, mirin and salt. 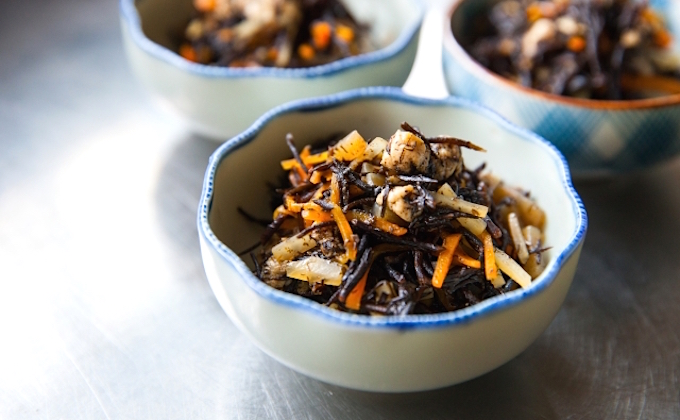 Hijiki-ni is a typical Japanese homemade dish. Hijiki (a variety of seaweed) that has been soaked and reconstituted, is pan-fried with oil and stewed in dashi stock, soy sauce and mirin, with carrots and abura-age (deep-fried tofu), until the liquid is reduced to almost nothing. 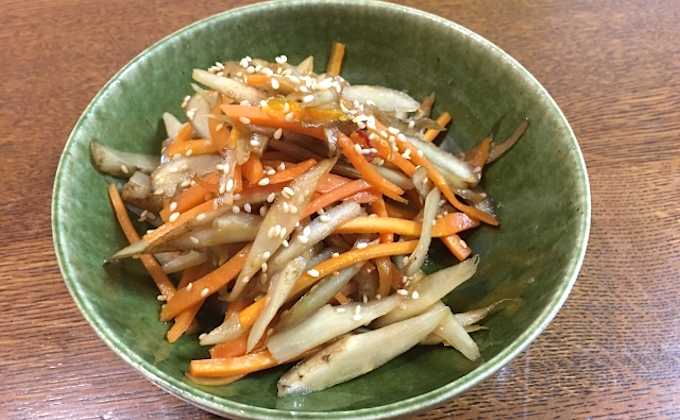 Kinpira gobo is a salty-sweet stir-fried dish of julienned gobo burdock root and carrots. These vegetables are seasoned with soy sauce and mirin, and glazed again with mirin during the finish. This is also a classic Japanese staple food. 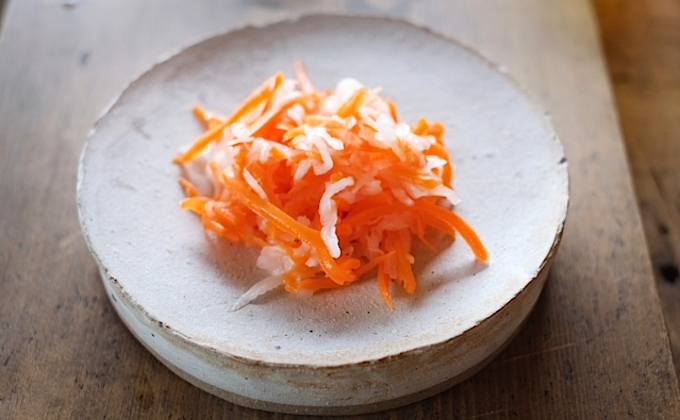 Sunomono is any vinegared dish. Ingredients are usually flavored with sanbai-zu, which is a mixture of vinegar, soy sauce and boiled-down mirin. The sweetness of mirin finishes the dish with a mildly tarty flavor. The most typical sunomono dishes are namasu, which is sunomono of julienned daikon radish and carrots mixed with vinegar and mirin, and cucumber sunomono, which is cucumber flavored with sanbai-zu. 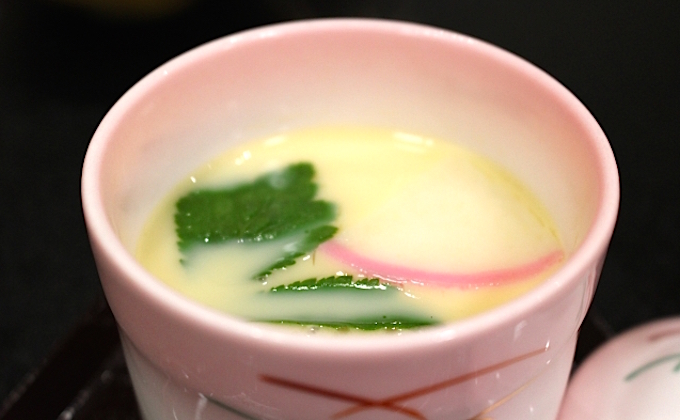 Chawanmushi is made by boiling a mixture of dashi broth, mirin, soy sauce and salt, adding beaten eggs and then draining the mixture. It is poured over takenoko bamboo shoots, gingko nuts, and other ingredients, in a small cup and then steamed. Grilled eel and udon noodles can sometimes be ingredients of chawanmushi, too. 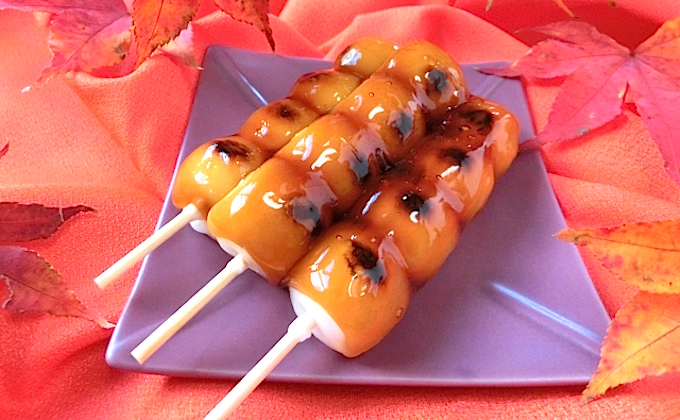 Mitarashi dango is a dessert of balls made by kneading rice flour, and some other ingredients, then steaming or boiling them. After being skewered and grilled, the dumplings are then dipped in or topped with a sweet and savory sauce, which is made from water, soy sauce, mirin and sugar, thickened with starch. 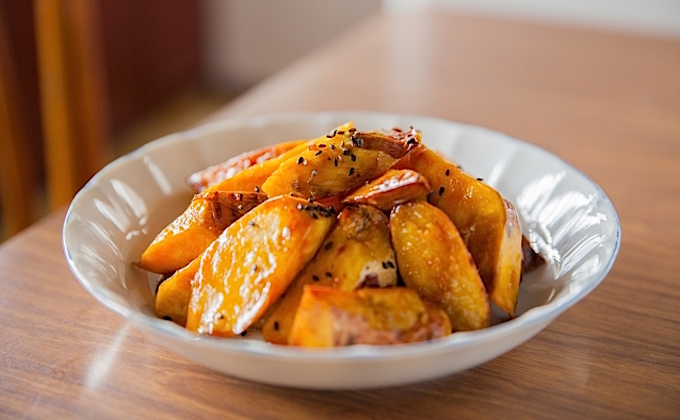 Daigaku imo is a Japanese dessert made by deep-frying chunks of sweet potatoes and glazing them with a sauce of mirin, sugar and soy sauce. Black sesame is sprinkled over the potatoes as a finishing touch. The potatoes are crispy and savory, and have both a nice glaze on the surface and a sophisticatedly sweet taste, thanks to the mirin.