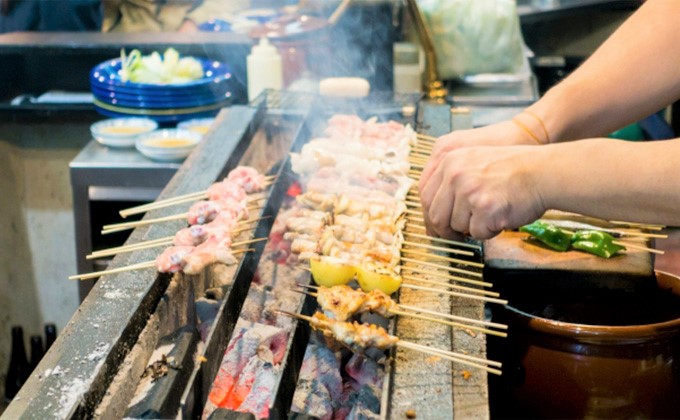 The History of Yakitori

Speculated progenitors of the chicken breeds we are now familiar with are four species of wild jungle fowl that inhabited Southeast Asia 4,000 years ago: wild red jungle fowl, Ceylon jungle fowl, grey jungle fowl and green jungle fowl. It is not clear which of these breeds were actually domesticated, but some of those domesticated breeds were brought to Japan from China, via the Korean Peninsula. At that time, chickens were kept, not for eating, but as a type of clock because they regularly crowed. Male birds were also kept for cockfighting, making use of their natural instinct to protect their territory.

Although chicken meat eventually began to be consumed for food and chicken eggs were used for medicinal purposes, in 675, the Emperor Tenmu issued the first decree to prohibit the eating of meat; not only chicken, but also cows, horses, dogs and monkeys. The reasons for the ban were because cows were used to plough paddy fields, horses for carriage and transport, dogs for guarding, chickens for telling the hour, and monkeys were too close to humans. Despite the ban, however, people continued to eat the meat of pheasant, quail, duck, goose, seagull, rabbit, deer, boar, pigeon and pork, according to a book written around 934. Among those, pheasant was cooked the most often.

A cookbook published around 1689 contains a recipe that calls for the meat of wildfowl, not chicken, and is interpreted as follows:

This suggests that a recipe for the yakitori we know today, was already established by the beginning of the Edo Period (1603-1867).

In the Meiji Era (1868-1912), the long lasting ban on meat consumption was lifted, and yakitori stalls appeared. At present, chicken is reasonably priced, but at that time, it was expensive. Thus, yakitori was made by grilling scrap meat (offal) of chicken on skewers. In 1923, after the Great Kanto Earthquake, yakitori stalls rapidly increased in number, and after World War II, yakitori made with a sauce containing the artificial sweetener saccharin, filled starving people’s stomachs. As Japan recovered from the devastation of war, broiler chickens, whichmature within a shorter period of time, were introduced from the United States at a low price, and the use of chicken as a common ingredient spread.

Nowadays, people fastidiously select the chicken used for yakitori, to seek a better taste, and to differentiate themselves from other restaurants. This enables us to enjoy varieties of yakitori unique to each restaurant.

Yakitori is not just “chicken on skewer;” it is a little more difficult to define. Each district has its own ingredients, sizes and ways of eating yakitori. Yakitori is cooked with pork in Muroran City, Hokkaido, and Higashi Matsuyama City, Saitama, but with horse in Kurume City, Fukuoka, to name a few. In Imabari City, Ehime, it is made with chicken but served without threading the meat onto skewers. There are other such differences and variations of yakitori, as well.

The National Yakitori Liaison Council (Zenyaren), which promotes yakitori culture all around Japan, conducted research using 20 encyclopedias and dictionaries, and roughly divided yakitori into three categories based on ingredients, cooking methods and the way it is served.

In the end, yakitori can be defined as: chicken, or offal of chicken, beef and pork, grilled and seasoned with salt or sauce, and usually served on a skewer.

The Difference Between Yakitori (in kana letters ) and Yakitori (in Chinese characters)
Yakitori sold at supermarkets or on menus at restaurants are written in either kana letters or with Chinese characters, and there is a difference between them. The former, written in kana, is pork on a skewer, and the latter is chicken on a skewer. The history of pork yakitori goes back to the era when yakitori stalls first began appearing. A variety of meat was cooked for yakitori at these stalls, so that common people could afford to enjoy it, since both pork and chicken were too expensive for them. Pork yakitori was called yakiton (literally: grilled pork), but the word did not take root, and instead, yakitori made with pork was called “yakitori”, just like the already established one.

Jidori refers to brands of chicken indigenous to Japan that meet set conditions and are listed as a Japan Agricultural Standard item.

The Difference Between Niwatori (ordinary chickens) and Jidori Chickens

Niwatori: an inclusive term for domestic fowl, and the most popular domestic poultry used for eggs, meat and feathers.

Jidori: Chickens whose genes are at least 50% Japanese native breed, and that meet conditions set by the Japan Agricultural Standard (standards for quality and production methods provided for agriculture, forestry, fishery and livestock products, and processed products). Jidori are reared for longer than 80 days after incubation. After the twenty-eighth day following incubation, the birds have to be kept so that they can roam freely on the ground, either within poultry houses or outdoors (maximum ten birds per square meter). 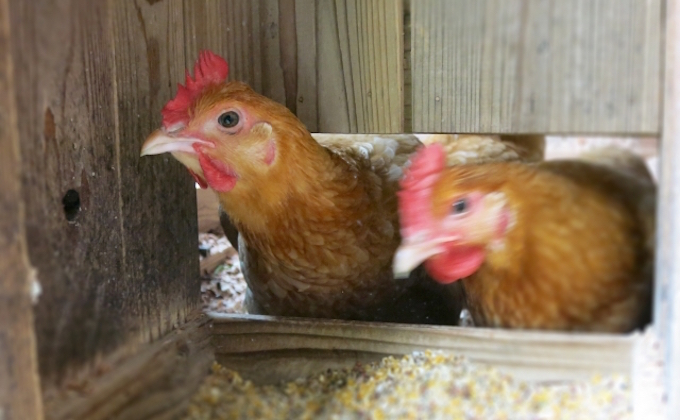 Formally a Nagoya variety, Nagoya Cochin is an Aichi specialty, reared for eggs and meat. It is a chicken masterpiece produced by the Kaifu brothers, who started poultry farming after they lost their jobs as samurai of Owari, during the Meiji Restoration. In 1905, Nagoya Cochin was recognized as the first Japanese native commercial chicken. In 1919, it was renamed the Nagoya variety, but the former name, Nagoya Cochin, is commonly known even today.
Nagoya Cochin decreased in numbers sharply when rapidly maturing White Leghorn and broiler chickens were brought from the United States. Use of these foreign varieties spread after World War II, and Nagoya Cochin was on the verge of extinction. However, a few purebred birds were bred to boost the numbers, and a crisis was avoided, which attracted people’s attention.
Nagoya Cochin eggs are small, and a beautiful, cherry pink in color. Some bear white spots on the surface. The color of the yolk is deep, and it has a smooth texture and rich taste. These chickens can be shipped in 120-150 days. The meat has a firm, springy texture and features a rich flavor.

Hinai Jidori (Akita Prefecture)
The history of Hinai Jidori can be traced back to the Hinai-dori. Named after the area where they were raised (Hinai District, in the northern part of Akita Prefecture), Hinai-dori are considered a cross between the jidori and shamo chicken breeds. The meat of these chickens tastes so good that Hinai-dori taxes were forgiven in the Edo Period.
Hinai-dori is a pure Japanese native and was listed as a Japanese National Monument in 1942, since it was both expensive and valuable. Poultry producers stayed away from Hinai-dori, because it matures slowly and is small in size compared to other chicken breeds. Therefore, it was bred for productive varieties while maintaining the good features of Hinai-dori. In 1973, Akita Prefectural Livestock Experiment Station successfully cross-bred Hinai-dori cocks and US origin Rhode Island Red hens, to produce the first filial generation, named “Akita Hinai Jidori.”
The distinctive feature of Hinai Jidori, a cross between Hinai-dori sires (which are a cross-breed of jidori and shamo chicken), and Rhode Island Red dams, is the delicious flavor of the meat. It has a flavor and aroma like pheasant, and the flavor and rich taste become more distinctive as it is chewed. These birds can be shipped in 160-180 days.

Satsuma Jidori (Kagoshima Prefecture)
Satsuma Jidori is a breed of chicken that has been raised in Kagoshima Prefecture since ancient times, for observation and cockfighting. It has, reportedly, been domesticated since the reign of Tadahisa Shimazu, the founder of Satsuma-han Domain 800 years ago. Quality jidori began being developed in 1990, and Satsuma-dori, which is Kagoshima’s Prefectural Monument, was cross-bred with the US native Rhode Island Red over 12 generations, resulting in the very first Satsuma Jidori, born in 2000.
Satsuma Jidori is sharp-eyed, has a well-developed head, a long neck, long legs, and a beautiful tail. It takes two to three times longer to raise Satsuma Jidori as it does to raise ordinary broiler chickens, but they can be shipped in 120 days. The meat can be enjoyed as sashimi or seared chicken. It has a pleasantly firm texture, and is low-calorie and healthy. That is why many people love Satsuma Jidori. 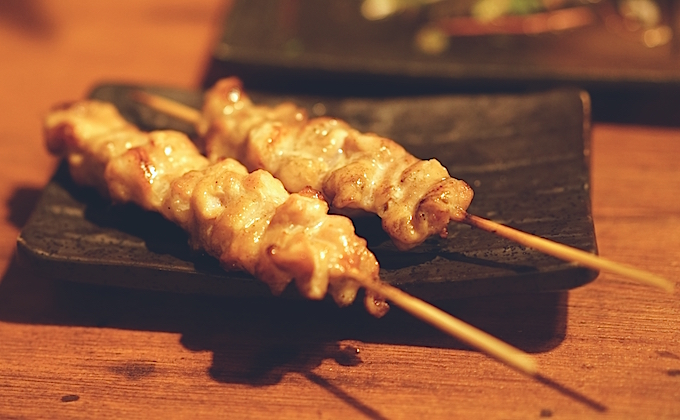 Thigh meat is a little bit firm but has a rich taste. Breast meat is lean and has a light taste. Both are typical yakitori ingredients. 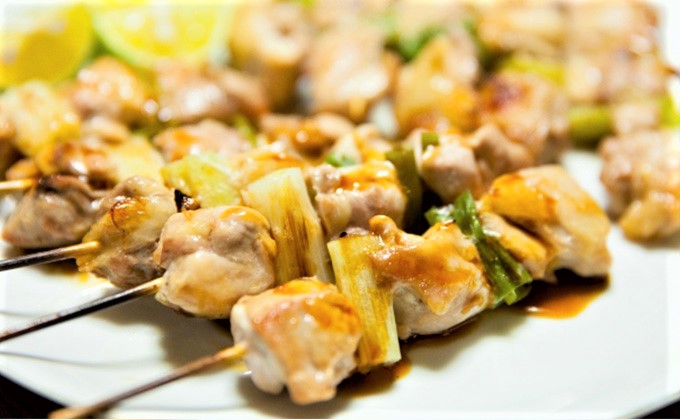 Negima is another typical yakitori that consists of chicken thighs or breasts with bite-size pieces of spring onions in between. 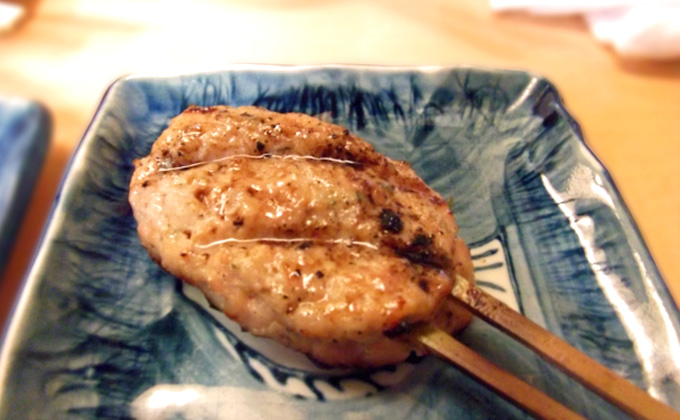 Tsukune are made by mixing ground chicken, eggs, starch, and some other things, which are then formed into balls. To improve the texture, some restaurants add chopped pieces of cartilage. 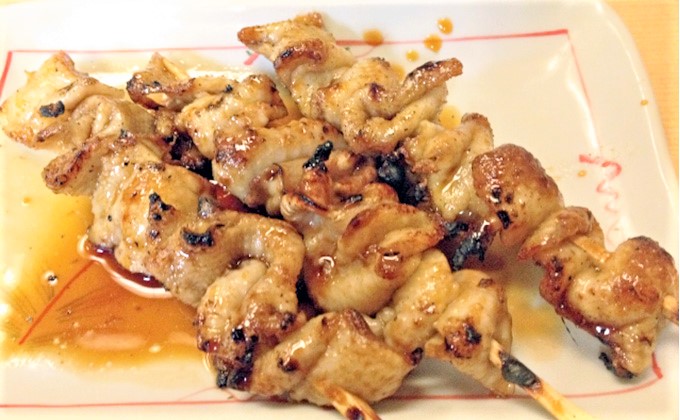 Kawa refers to the skin of the chicken, usually taken from the thigh, breast and neck. It contains a lot of fat. 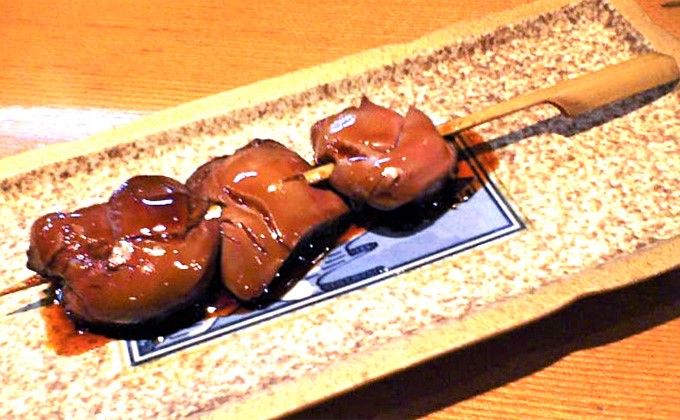 Reba is chicken liver. It is a love-it-or-leave-it yakitori item because of its odor and texture. However, it is nutrient-rich. 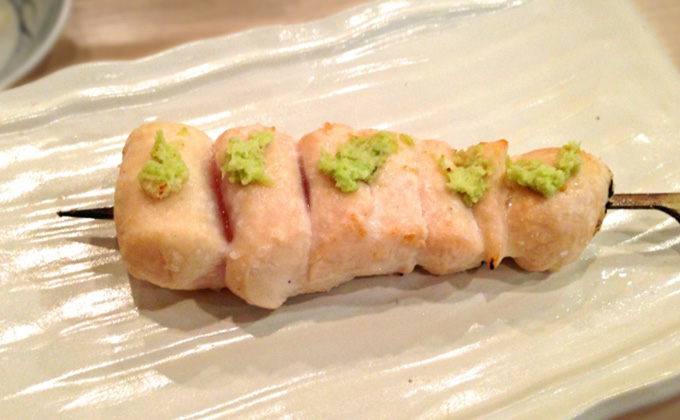 Sasami is the least fatty part of the chicken. It has a light and simple taste, so some restaurants add Japanese shiso (an herb) to maximize the flavor. 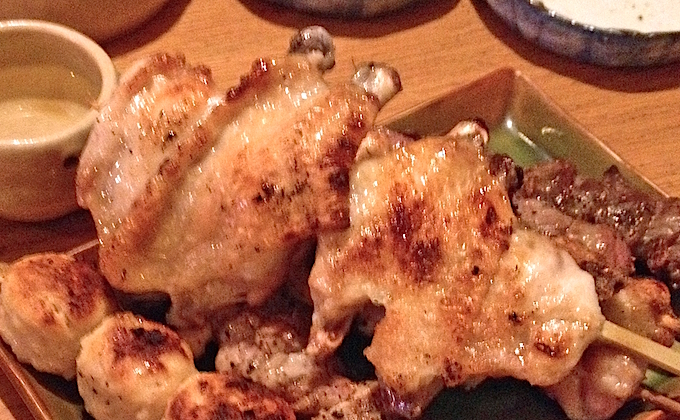 Teba or tebasaki are chicken wings. They have the rich, full flavor unique to meat found around bones, and are high in collagen. 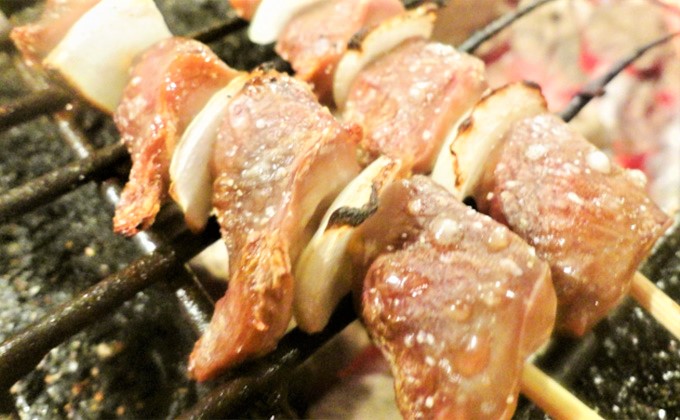 Chicken gizzard is the bulging part around the digestive tract. This is one of the most popular parts of the chicken. It is odorless and has a chewy texture. 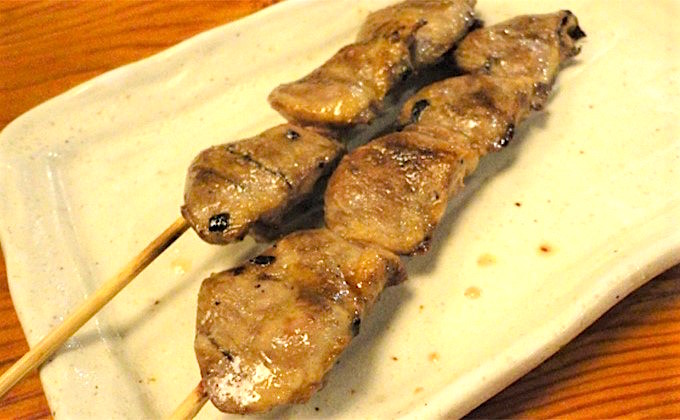 Hatsu is the chicken heart. It features a chewy, rubbery texture. 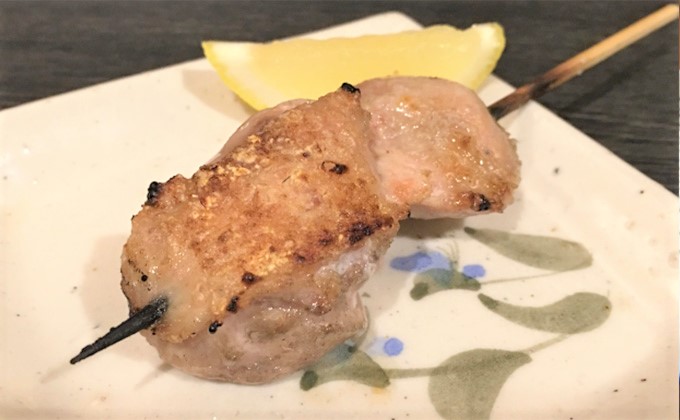 Sori is a muscle part found inside the pelvis, known as chicken oysters. It tastes delicious, but it used to be thrown away without knowing how good it was. It has a unique, rubbery texture and a full chicken flavor. 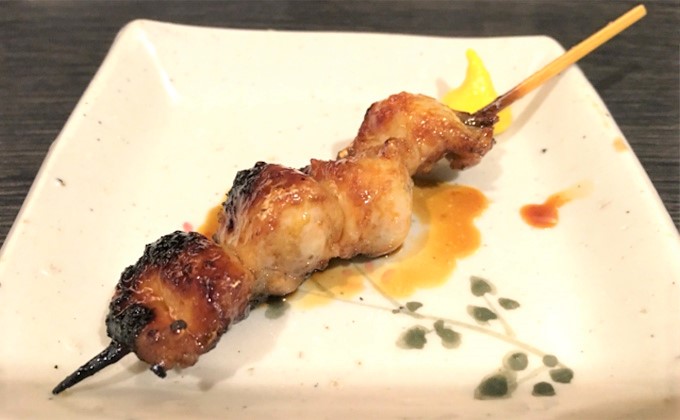 Bonjiri is the part where feathers grow from the tail. It is fatty, and has a rich taste, so it is a filling yakitori item. 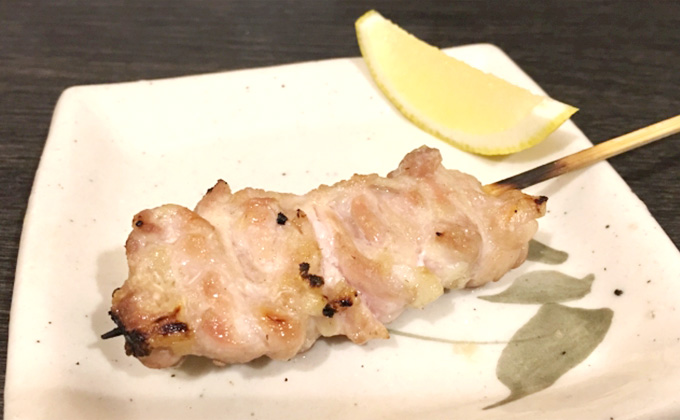 Seseri is a rare part that can only be harvested a little from each chicken. It is pleasantly fatty and firm, and increases in flavor and juiciness the more you chew.