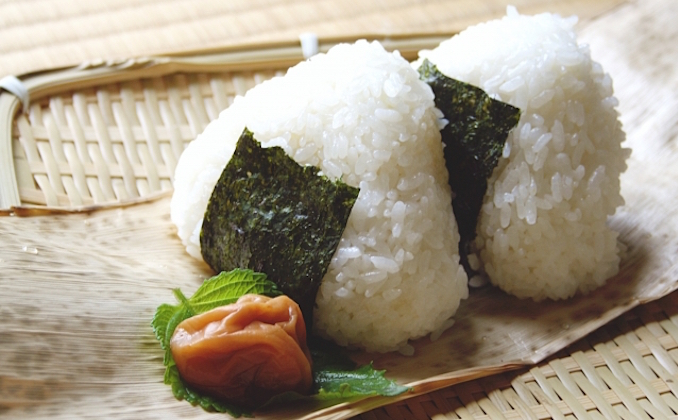 The History of Onigiri

Carbonized clumps of rice, similar to onigiri, have been discovered in late Yayoi Period ruins, indicating that food like onigiri has been in existence since then. However, the onigiri-like food at that time seemed to be rice wrapped in bamboo leaves in a corn-like shape, and boiled or steamed. The origin of the present form of onigiri dates back to the Heian Period, when there was a food called “Ton-jiki.’ Ton-jiki was brown rice packed firmly into an egg shape, and distributed to domestic servants as a token of appreciation during events at imperial or noble households. “Ton” written in the Chinese character means “to collect and bundle,” and also “instant.” After the Heian Period, onigiri became an invaluable, convenient food, eaten as rations at the time of the Sengoku Period, and also as a “bento” (packed lunch) during farm work.

Onigiri were originally made out of sticky, glutinous rice, but at the end of the Kamakura Period, ordinary rice started to be used. The present form of onigiri, with “nori” (seaweed) wrapped around it, developed along with processed, rectangular seaweed laver, whose use spread widely during the Genroku Era in the middle of the Edo Period (from the end of the 17th Century to the beginning of 18th Century). Onigiri also began taking root as a bento for common people at firework displays and cherry blossom viewing parties, as well as, a portable food for travelers.

In 1885, bento lunches for train passengers were sold for the first time at Utsunomiya Station in Tochigi Prefecture, consisting of two onigiri with pickled plums (umeboshi) and daikon pickles wrapped in bamboo skin. In the Meiji Period, the first school lunch menu in Japan was onigiri, grilled fish and pickles. Convenience stores first appeared in Japan in the 1970’s, and they sold onigiri accompanied by a film-wrapped sheet of nori. Later on in that decade, innovative packaging which enabled people to wrap onigiri with nori more easily was invented, and became extremely popular. Since then, convenience store chains further developed the package into what is used today. Onigiri remains deeply rooted in the Japanese diet, found in many situations as a staple or a portable food, as well as a warm meal service after a disaster.

Recently, “onigirazu” has been all the rage. Onigirazu is made by spreading rice on a sheet of seaweed, piling various fillings on it, and wrapping it all up with more seaweed, almost like a rice sandwich. 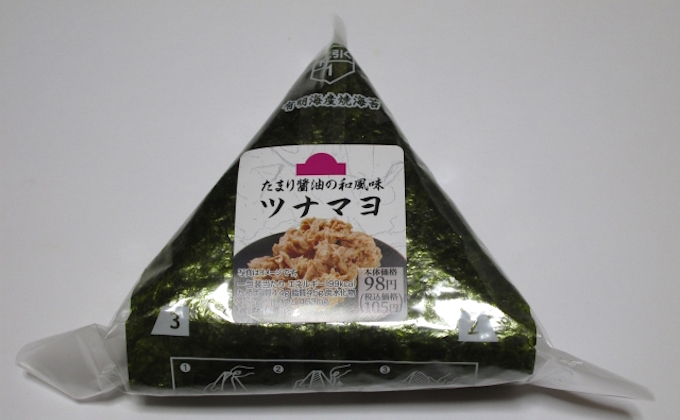 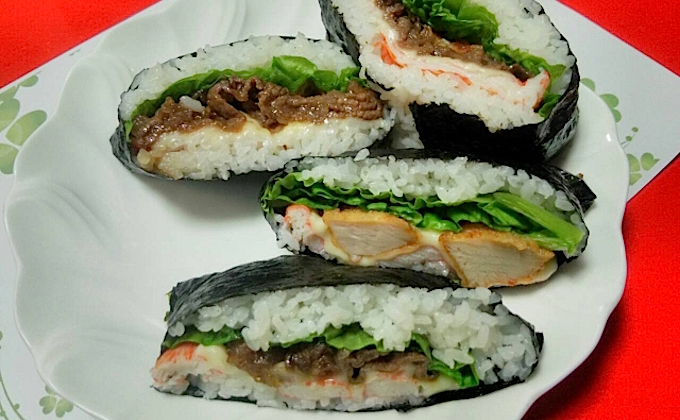 What is an Onigiri?

The onigiri is a very typical Japanese food, popular for carry-along lunches.

Shapes and sizes vary, as do the fillings, which are usually salty so that they do not go bad.

Nowadays, various kinds of onigiri are available, which sometimes use unique fillings and have extraordinary appearances.

The onigiri is a simple food, which can easily be manipulated.

The Difference between Omusubi and Onigiri

Both are rice balls, and the contents are the same. They are simply called by different names depending on the region and the shape. The term “onigiri” has a rather long history, originating from the phrase: nigiri-meshi (meaning “hand-pressed rice”), which is made with tightly packed “kowaii,” (steamed, sticky, glutinous rice).

How to Make Onigiri

Fresh rice is rich in umami (savoriness), which remains longer when formed into onigiri while fresh and hot.

①Put a scoop of freshly-cooked, Japanese-style rice into a rice bowl.

②Make a dent in the middle of the rice and insert your preferred filling.

③Wet your hands with cold water and rub them with a little salt, so the rice does not stick to your hands.

④Wrap the rice around the filling and form it into the desired shape: triangle, ball, “tawara” (cylinder), etc.
※Please do not press too much, because the rice will become like glue. Press it into an onigiri with gentle and equal pressure.

⑤Cover your onigiri partly or fully with nori seaweed, to help maintain its shape and make it easy to hold and eat.

Variations on the Fillings for Onigiri 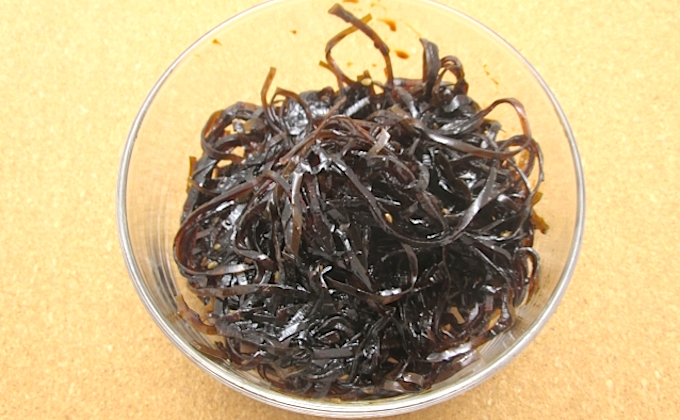 A kind of seaweed. For onigiri, thin strips of kombu cooked in tsukudani (a soy-sauce based sauce), or shio-kombu (salted kelp), are used. 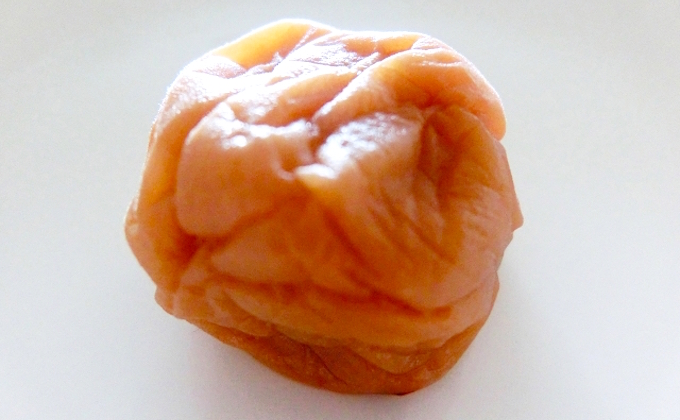 Umeboshi is an ume plum, or Japanese apricot, which has been salted and dried in the sun. It is effective in helping toward recovery from fatigue and loss of appetite. 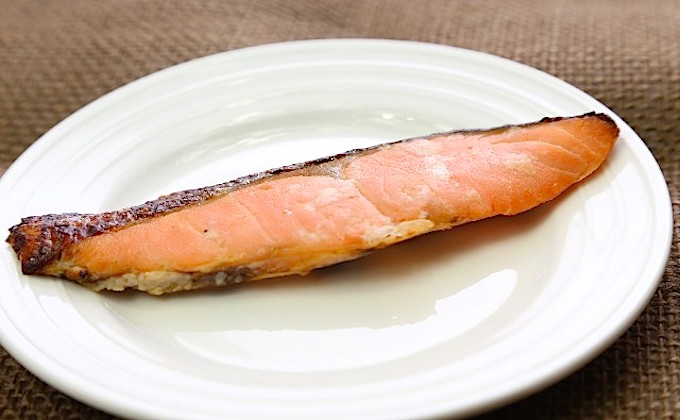 Grilled and flaked salmon is best. 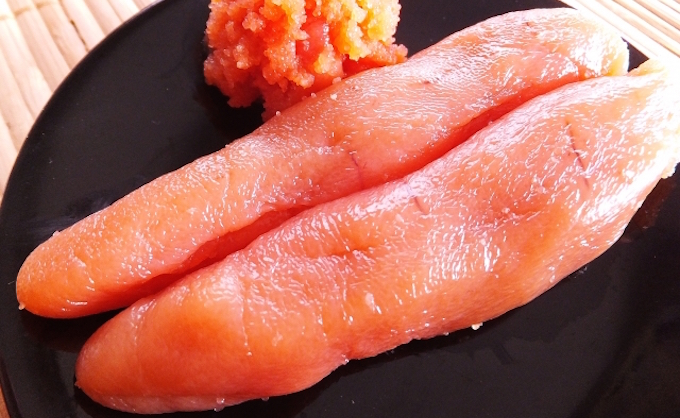 Tarako is salted cod roe. It is grilled and cut into small chunks before being put inside the onigiri. 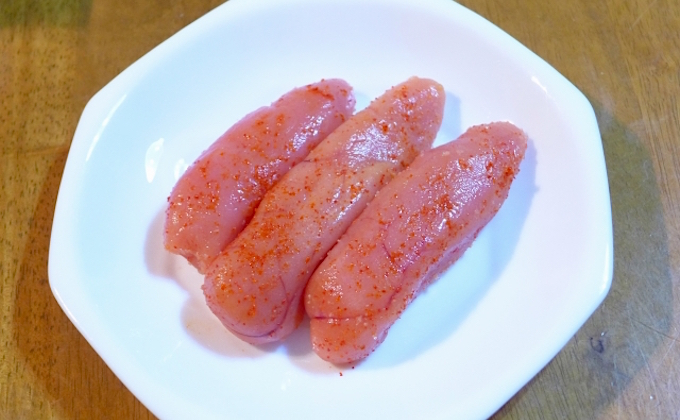 Karashi mentaiko is tarako marinated in hot pepper sauce. ※The word “Mentaiko” is derived from “Mentai-uo”, which was the Chinese name for Alaskan pollack. It is the spicy version of tarako. 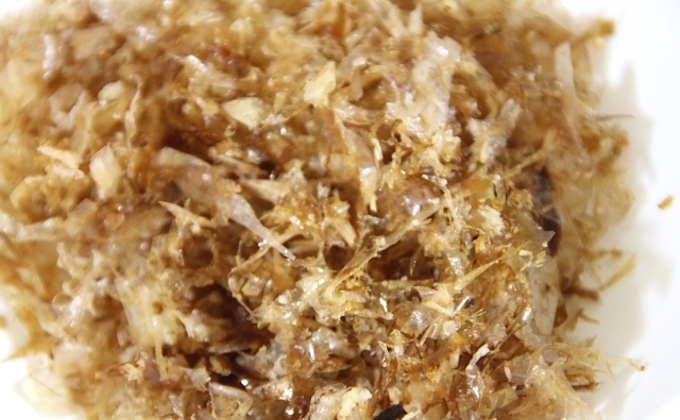 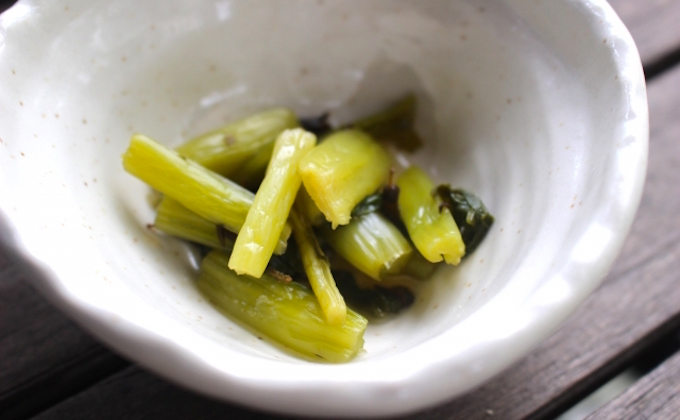 This is a filler of Japanese-style pickles made from the stalks and leaves of nozawana, a kind of Japanese leaf vegetable. It has a refreshing and salty taste. 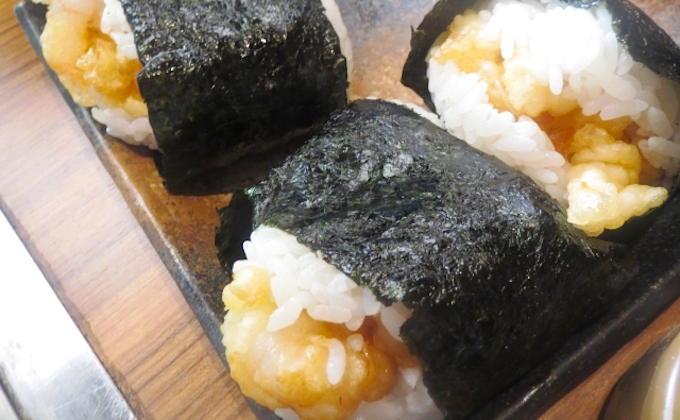 Crispy shrimp tempura is used as the filling. 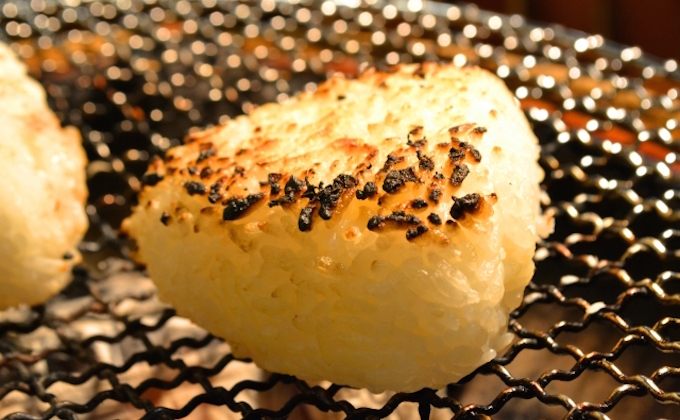 Instead of filling the inside, the flavor is put on the outside as onigiri are put into a fry-pan, and a sauce made of soy sauce and sugar is brushed onto the rice balls while they are being grilled. Many people appreciate the flavor of slightly burned soy sauce. 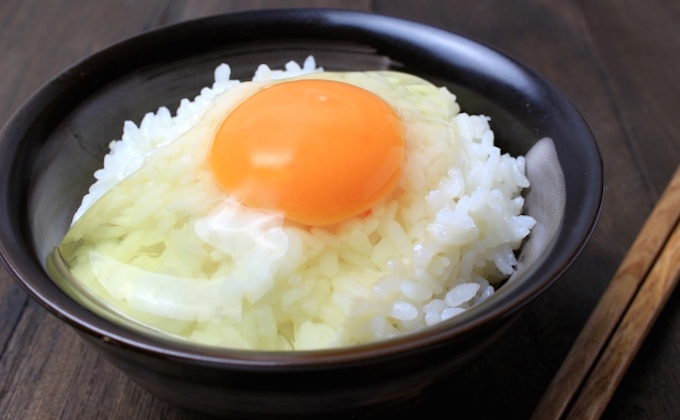 A popular menu item in Japan, raw egg with soy sauce poured over rice, is transformed into an onigiri filling. 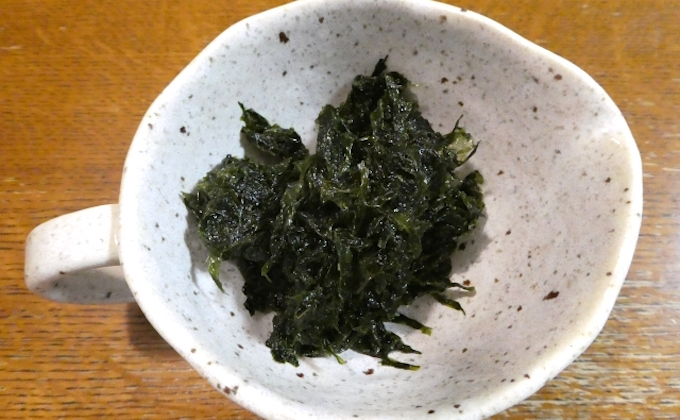 Normally eaten as a topping on a bowl of rice, nori-no-tsukudani becomes more convenient to eat when put inside onigiri. 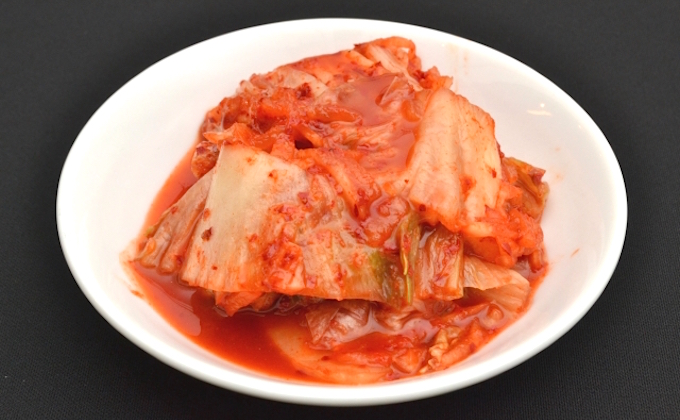 Kimchi is put inside the onigiri, and its spiciness is a great match with the rice. 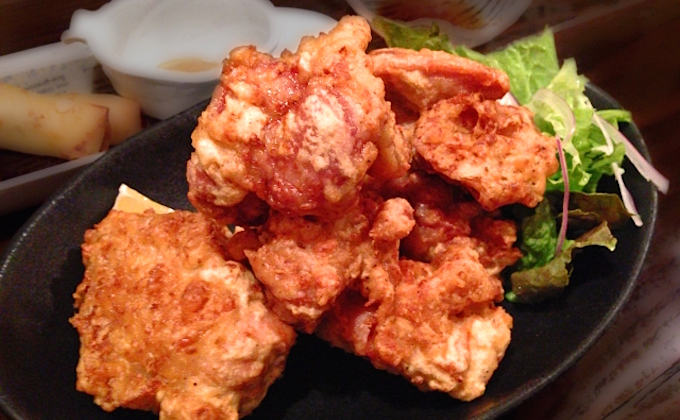 Okaka is brought to a new level with the addition of cheese. The rich, yet mellow flavor of cheese goes well with dried bonito.

Grilled meat and rice are an excellent match! The texture of the grilled meat adds extra satisfaction to the meal.

Canned tuna is drained of oil and then mixed with mayonnaise.

Okaka is brought to a new level with the addition of cheese. The rich, yet mellow flavor of cheese goes well with dried bonito.

Instead of putting the filling inside, tiny tempura balls, chopped green onions and noodle soup broth are mixed into the rice first, then shaped into an onigiri. Very flavorful!