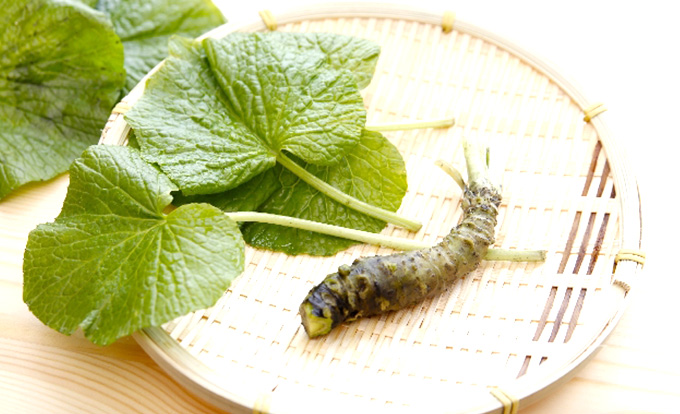 Although wasabi has now become an essential component of Japanese food culture, as in sushi and soba (buckwheat noodles), records show that in ancient times like the Asuka period (end of 6th, beginning of 7th centuries) it was used as an herbal medicine.

Wasabi began to be consumed as food around the Kamakura Period (late 12th century), and cookbooks during that era contain the ingredient, wasabi.

Later, in the Keicho era of the Edo Period (late 16th to early 17th centuries), wasabi cultivation began in Shizuoka. In the Bunsei and Tenpo eras (late 18th century), sushi and soba became popular, and that led wasabi, as a condiment, to spread widely and rapidly.

In the early years of the Showa Period (early 20th century), processed foods using wasabi began to be developed, and as a result, many products such as powdered wasabi, kneaded wasabi made using horseradish, and freshly grated wasabi using “hon” (real and fresh) wasabi, appeared.

Wasabi is a plant that originates in Japan, and can be cultivated throughout the year. It grows wild in the clear streams of deep mountain forests, but most of the wasabi available on the market is grown and cultivated in fields.

There are two types of wasabi: one is sawa-wasabi (water wasabi), which is grown in water, and the other is hatake-wasabi (field wasabi), which is, literally, grown in a field. The plants must grow for over two years before cultivation.

The green paste of wasabi added to sushi and soba is a grated part of the plant called “rhizome.” Grating the rhizome breaks the cells and releases a strong and pungent scent. (This pungency is volatile, however.) Wasabi’s main feature is this strongly pungent, yet refreshing, scent. It can reduce fishy smells, and make soba noodles with bonito broth sauce taste better. Shark skin graters are considered to be the best fit for wasabi, because they can make a smooth and fine paste. 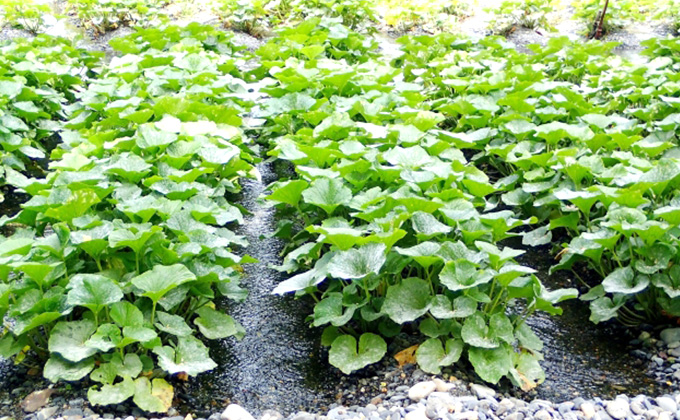 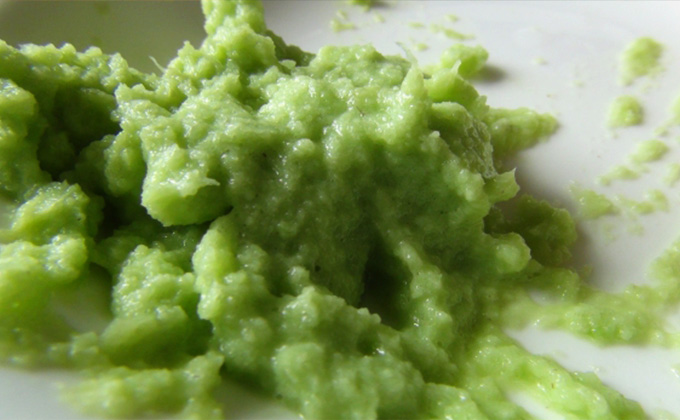 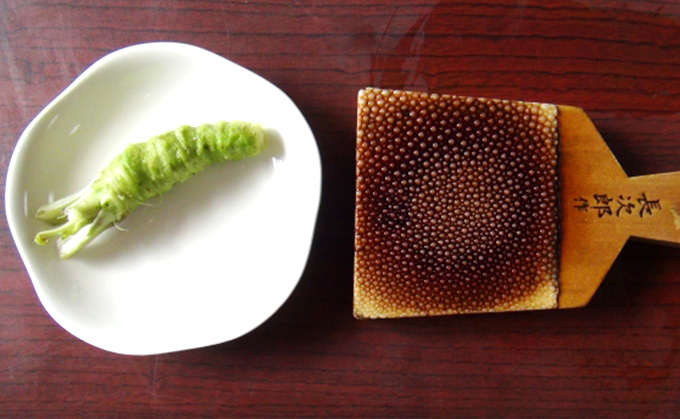 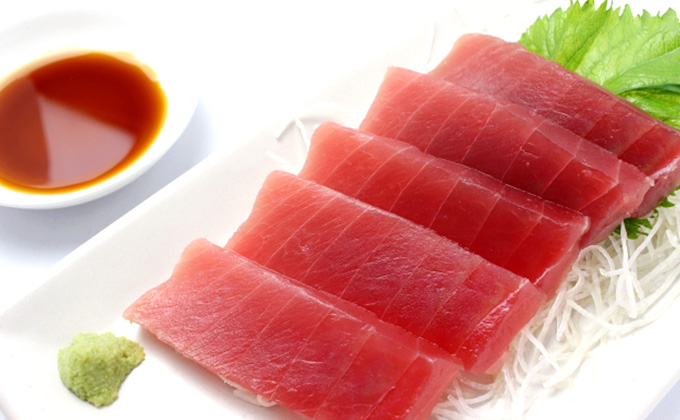 Grated wasabi serves as a condiment for sushi, sashimi and soba (buckwheat noodles). It also goes well with unseasoned, grilled eel and works wonders with beef steak. When adding wasabi to sashimi, it should not be mixed in soy sauce, so it can keep its flavour. Sashimi tastes delicious when eaten with wasabi. Put a little on white-meat fish, and spread plenty on fatty fish such as tuna. When eating soba, add wasabi little by little to the soba noodles, not mixing it in the dipping sauce too much, so you can enjoy each individual flavour: soba, dipping sauce, and wasabi. 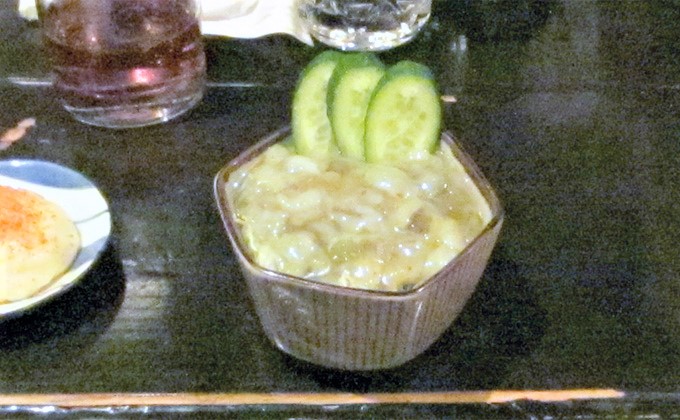 This is a typical menu item at an izakaya (Japanese-style pub). Small pieces of raw octopus are marinated in a mixture of wasabi, sugar, soy sauce, salt and others. With the distinctive texture of octopus and the pungency of wasabi, it is a deliciously perfect nibbler for Japanese sake, shochu (Japanese distilled spirits), or white wine. 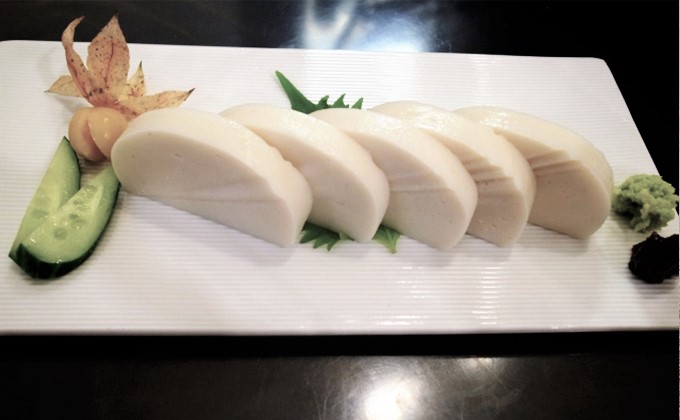 Itawasa is thinly sliced kamaboko (boiled fish cake), served with wasabi and soy sauce. As with sashimi, simply add wasabi and soy sauce to kamaboko and eat. The name of the dish, “itawasa,” is derived from the board (“ita”) to which kamaboko is attached and wasabi. A simple, but delicious way to enjoy kamaboko, this is a typical à la carte menu item at soba restaurants. It also goes well with Japanese sake.

This is blanched, or lightly seared, and cooled chicken tenderloin, enjoyed with wasabi and soy sauce.

Boiled soba noodles garnished with fresh vegetables are served with a wasabi dressing. Soba and wasabi is, no doubt, a perfect combination.

Grilled chicken breast with salt and wasabi allows you to enjoy the pungency unique to wasabi.

Finely chopped wasabi is salted, and mixed with matured sake lees, salt, sugar and others. The sweetness of sake lees mellows the strong scent and pungency of wasabi, and also creates a pleasant texture. It is a perfect accompaniment to both rice dishes and alcoholic beverages, as well as, a tasty condiment on kamaboko (boiled fish cake).

Boiled wasabi flowers or leaves are marinated in a sauce made from soy sauce, sake, mirin (sweetened rice wine), sugar, and others. Wasabi flowers and leaves taste best when prepared in this way. The distinctive pungency and flavour of wasabi may be habit-forming. This dish, also, goes perfectly well with rice and alcoholic drinks, of course!

Julienned yam potatoes are mixed with wasabi and soy sauce, then topped all over with scattered laver.

Tuna and Avocado, with wasabi and soy sauce

Lean tuna and avocado are mixed with a sauce made from soy sauce and wasabi. The flavourful tuna goes well with the avocado. The scent of wasabi spreads in your mouth, and the pungency serves as a good accent. Goes perfectly well with alcoholic drinks such as beer and Japanese sake, too.

Rice Soaked in Tea with Wasabi

The pungent wasabi will whet your appetite.

Tempura of wasabi leaves and flowers. Slightly bitter, yet scrumptious.