The History of Kamaboko

Kamaboko first appeared in a tome published in the Heian Period. The book, called Ruijuzatsuyosho, depicts various scenes: meals for the Emperor, Chief Advisor to the Emperor, and Ministers, banquets for ordinary or special ceremonies and events, the interior of houses, daily necessities, and so on, in colored detail. There, in that book, is the earliest known illustration of kamaboko, as it is being served at a celebratory feast for the Minister of the Right, in 1115.

Around that time, kamaboko was ground fish meat wrapped around a bamboo stick and chargrilled. Because it resembled both the head of a cattail (gama in Japanese) and a sword (hoko in Japanese), it was first dubbed “kabahoko,” which later evolved into kamaboko.

Kamaboko arguably took its current form, loaf-shaped on wooden boards, in the Muromachi Period. Over time, this new version on boards began to be called kamaboko, too, and the early forms of it were nick-named “chikuwa” (bamboo ring), because the cross-section resembled bamboo when sliced.

Kamaboko is a fish cake made from ground fish meat. The main ingredient was originally catfish, but currently, grunt fish, golden threadfin bream, lizardfish, big smelt-whiting, sharks, Alaska pollack, drumfish, pike conger, Japanese bluefish, and others, are being used, too.

Usually, kamaboko is made from white fish meat only, and red or dark red meat is not used. To make kamaboko, filleted and washed fish flesh is immersed in water and then ground. The ground puree is mixed with sugar, salt, mirin (sweetened sake), and egg whites, then kneaded. After being shaped into the desired form, it is cooked either by roasting, boiling or deep-frying.

Immersing the fish in water removes the fat and blood. Heating it enhances the distinctive whiteness and causes the protein fibres contained in fish meat to intertwine, giving kamaboko an excellent elastic texture.

Day of Kamaboko
The date of the earliest record of kamaboko, a written document from 1115, gave the National Federation of Kneaded Fishery Products Cooperative an idea. So, in 1983, November 15th (11/15) was designated Kamaboko Day.

November 15th has, also, traditionally been a gala day for children of three, five and seven years of age (shichi [7] go [5] san [3]) to wish for, and celebrate, children’s growth. On this occasion, it has become a custom to serve red and white kamaboko as a festive dish. Red and white kamaboko is often served as an important food item for celebrations.

Boards for kamaboko are usually made of white wood with few knots and little odor, such as fir or Abies trees. Steamed Kamaboko on a Wooden Board

This is Kamaboko that is made by mounting surimi (ground fish paste) on a board in a fan shape, and heating it. This kind of Kamaboko is made by spreading surimi paste out on dried kelp and then rolling it up in a spiral shape without setting it on a board. To keep the sweetness of the meat, the fish is immersed in water for a shorter period of time. Kobumaki kamaboko is mainly produced in Toyama Prefecture.

Sumaki kamaboko is a local specialty, produced in the Chugoku and Shikoku Districts. Surimi paste is formed into a cylindrical shape, wrapped evenly with straw and steamed. Sumaki kamaboko features a modest sweetness and strong elasticity.

This Kamaboko has a great balance of flavours: the sweetness of fish basted with mirin (sweetened sake), and the charred taste of roasting. It is the most common kamaboko found in the Kanto area.

Surimi paste is shaped on a wooden board and roasted without steaming. It features rich flavors. 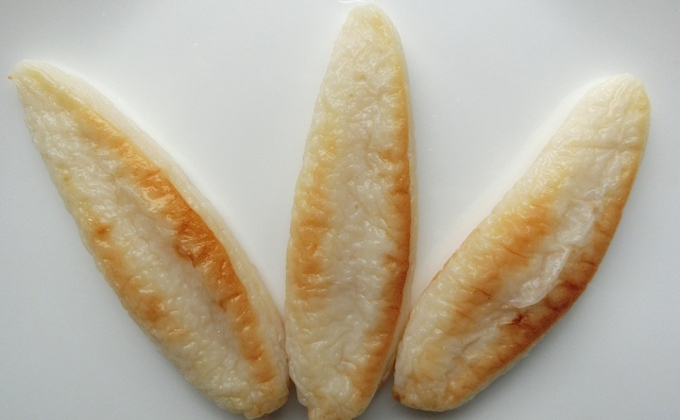 Surimi paste is formed into the shape of a bamboo leaf. The surface is pleasantly browned, and it has a tender and crispy texture. This is a local specialty product in Sendai, Miyagi Prefecture.

Nanba-yaki is a local variety of yakinuki kamaboko without a board, produced in Wakayama Prefecture. Surimi paste is stuffed into a square pot and roasted. There is a theory that claims that the name originates from the color of maize (namba is a local word for maize in Japan), which resembles the color of the round center part of nanba-yaki.

Ume-yaki is yakinuki kamaboko, made by stuffing surimi paste mixed with eggs and sugar into a mold with a plum flower shape. This is a special product of Osaka, with a light texture and sweetness. Datemaki is made by stuffing a mixture of surimi paste, eggs and sugar into a square mold and roasting it, then rolling the cooked product with a bamboo mat into the shape of の, a “letter” in the Japanese alphabet. Datemaki features a sweet flavour and dark brown colour on the surface. It is often used in dishes for the New Year.

Shiroyakikamaboko, which is not brown, but white in color, is a local specialty in Yamaguchi. It is made without sugars that turn brown when heated. The surface has wrinkles because it is cooled down at room temperature after being cooked. Chikuwa is made by wrapping surimi (ground fish) paste around a bamboo stick and heating it. The grilled one is called “yaki (grilled) chikuwa” and the steamed one is called “shiro (white) chikuwa.” Chikuwa is the original form of surimi seafood products.
Noyaki is made by wrapping raw paste made solely of flying fish, or frozen paste of Alaska Pollock, around a steel skewer and roasting it for fifteen-twenty minutes. It is large in size, and the standard one is about thirty centimeters long and 500-600 grams in weight. The largest one is about forty-five centimeters and weighs more than one kilogram. 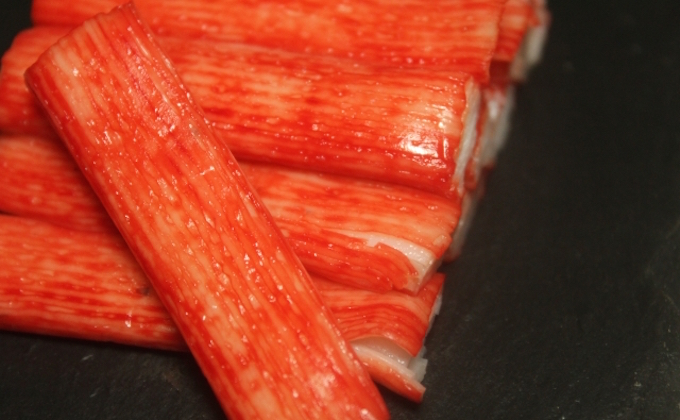 Boiled kamaboko is produced by shaping seasoned surimi and boiling it in hot water. Variations include hanpen, suji, tsumire and naruto-maki. Hanpen is made by adding yams to processed fish meat and mixing it until smooth. This mixture is then shaped and boiled in hot water for ten minutes. It contains a lot of air, is white like a marshmallow, and extremely tender and smooth in texture. It is good for oden, but delicious as is, too. Naruto is made by rolling out surimi paste, adding reddened fish paste in the middle, and wrapping everything with a bamboo mat. The mat full of fish paste is then boiled in hot water. When sliced, the cross-section has a spiral pattern like a whirlpool. This is why it is named after the whirlpool of Naruto Kaikyo Channel. Naruto is often used for ramen and udon noodles.

Suji is boiled kamaboko made from the sinew and cartilage removed from fish when making surimi paste. The crunchy and chewy textures of cartilage and gelatinous sinew go well together. Suji is often used for stewed hot pot dishes like oden, and others.

Tsumire is made by pinching off chunks of fish paste to make balls. The fish balls are then dented in the center so that the core can be heated and boiled in hot water for five minutes. After that, they are cooled down in cold water. Tsumire is rich in fish flavors and commonly used for oden hot pot, other hot pot dishes, and soup.

This kind of kamaboko is made by shaping seasoned surimi paste and deep-frying it.
Varieties of deep-fried kamaboko include: satsuma-age, shiroten, jakoten and gobou-ten. Satsuma-age is one of the most typical deep-fried kamaboko varieties. Glucose and mirin are usually added to surimi paste to brown the surface. Satsuma-age is a special product in Kagoshima, and its local name is tsuke-age. It is called Satsuma-age in Tokyo and tempura in Osaka. There are two kinds of Satsuma-age. One, called nama-age, is made by deep-frying raw surimi paste, and another, called mushi-age, is first steamed, then deep-fried. Satsuma-age has rich flavor and is often used for hot pot dishes and oden. Jakoten is a local specialty produced in the Uwajima area of Ehime Prefecture. It is made by grounding whole, fresh small fish (including skin and bones) into a paste and then deep-frying. The color is blackish and it contains the rich, condensed flavor of small fish. Compared to other kamaboko, jakoten is high in calcium, DHA (docosahexaenoic acid) and EPA (eicosapentaenoic acid). Washed and cut gobou burdock root is wrapped with surimi paste and deep-fried. Besides gobou, carrots, kidney beans and boiled eggs are used. Gobou-ten is commonly used for oden, but it is also delicious when grilled and eaten with wasabi or ginger and soy sauce.

Kamaboko with special packaging is surimi paste wrapped in bags or films and then heated.
Casing-packaged kamaboko, is sealed off in a special bag for meat called “casing,” and then heated. Another one, wrapped in plastic film, stuffed into a mold and heated, is called riteena (retainer-formed) kamaboko. Decorative kamaboko is formed into shapes such as sea bream (which is considered a good luck food in Japan) and colored, and is often used as a gift for guests at wedding receptions. The production volume has gone down compared to the past, but decorative kamaboko is still produced all around Japan for congratulatory gifts in the shapes of sea bream, Mt. Fuji, and pine, bamboo and plum trees (symbolic expressions of auspicious matters). Surimi paste with seasonings are colored and formed in one of the following three methods: kiridashi (where kamaboko is sculpted into a shape), suridashi (where many paper molds are placed one by one on a board and surimi paste in different colors are molded to complete an image), and shiboridashi (where colored surimi paste is squeezed out of a pastry bag with a piping tip on one end to create a picture). Once formed, the kamaboko is then steamed.