Yoshoku: the much-loved marriage of Japanese and Western cuisines 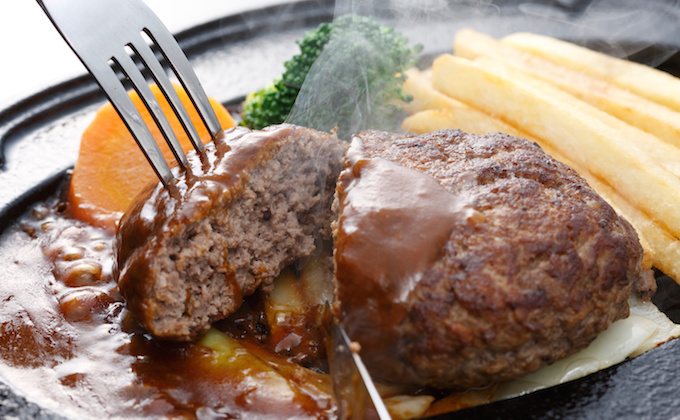 When you think of Japanese dishes, what is the first thing that comes to your mind? What do you like eating? You might be a big fan of sushi, teppanyaki and tempura, or you might be a frequent visitor to yakitori or ramen shops. But what about yoshoku?

Ask Japanese children what their favorite food is, and kare raisu (curry over rice), hambagu (burgers), and omuraisu (ketchup-flavored stir-fried rice in a thin omelet) always rank in the top 10. These dishes, reminiscent of Western food, are categorized within Japanese cuisine as yoshoku, which is defined by the Japan Yoshoku Association as, “uniquely localized Western cuisine, usually eaten with rice.”

The yoshoku dishes are not only children’s favorite. For older generations, too, they are an uplifting, comfort food, because many experienced the taste of Western cuisine for the first time through yoshoku. These dishes are often prepared with a characteristic demi-glace or béchamel sauce, rarely used in today’s French cuisine because they are considered old-fashioned.

The History of Yoshoku 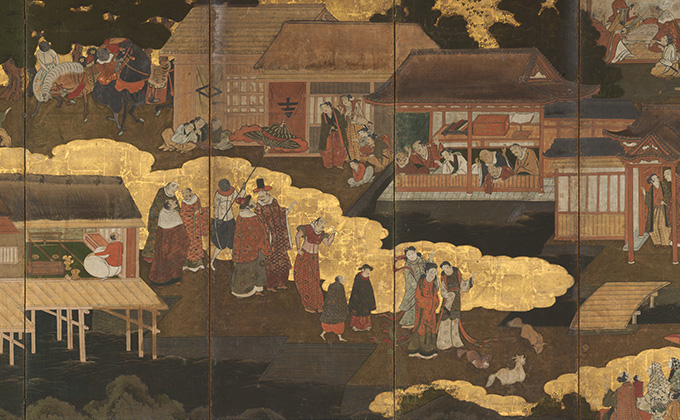 For Japanese people, the first encounter with Western cuisine is said to be when Japan began trade and exchange with Portugal and Spain in the 16th century. Western cuisine, however, focused on meat dishes, so its popularity did not spread at the time because meat consumption was officially prohibited in Japan. Despite the ban, people ate some meat, including duck, deer, and boar, for medicinal and energizing purposes. 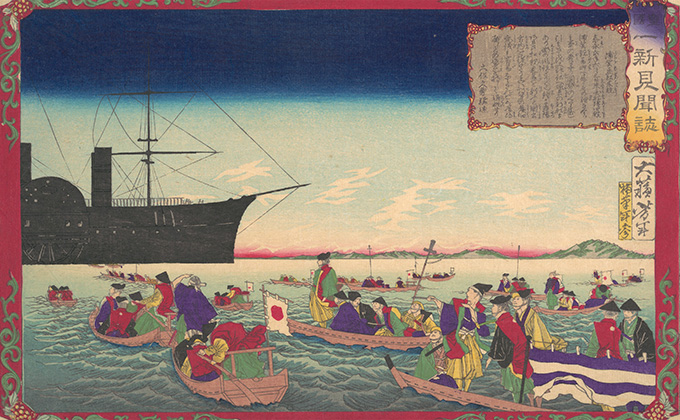 It was not until the late Edo Period that Western cuisine was widely imported to Japan. When isolationist Japan was forced open by America’s so-called Black Ships, many foreigners arrived from various countries, including the UK, America and France. Foreign settlements were established and within them, Western-style restaurants and hotels, which became the center of Western food culture. 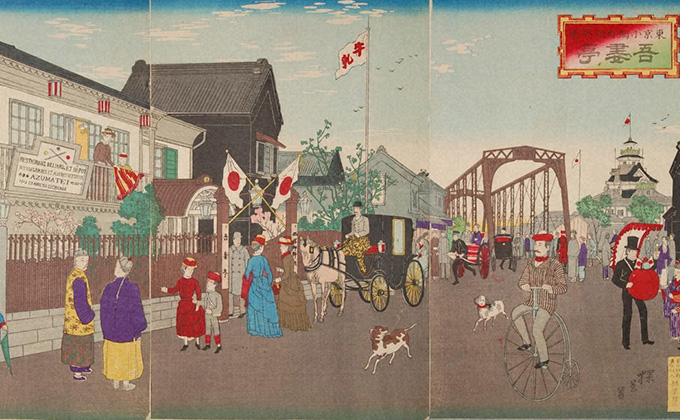 Many Japanese people worked under foreigners in those hotels and restaurants, and some of them learned authentic Western culinary skills. Those Japanese cooks later opened their own restaurants, the first one of which was Ryorin-tei, established in Nagasaki in 1863. Western cuisine was shaped by the Japanese over time to fit local tastes, and after years of blending Japanese and Western style dishes, yoshoku began to, little by little, take root in the Japanese diet as a dish that goes well with rice, rather than bread.

After the Meiji Restoration (1868), the government promoted vitamin-rich Western cuisine, and meat consumption, aiming to both strengthen the Japanese population physically, and to catch up with Westerners economically and militarily. Soon after the Meiji Restoration, French cuisine was introduced at birthday dinners for the Emperor and banquets, so government officials and military personnel were obliged to be well-versed in Western table manners.

Despite the fact that Western-style dishes were not easily embraced, as is, by Japanese people, gyunabe, which was a beef hot pot seasoned in the Japanese way (with soy sauce and sugar), became all the rage. However, yoshoku dishes like gyunabe and others were rarely accessible to commoners.

The navy, which had much contact with Westerners, proactively introduced yoshoku to their meals because it was their policy to become familiar with Western table manners and etiquette. Also, yoshoku was more nourishing than traditional Japanese cuisine. As a result of promoting yoshoku dishes eaten with rice cooked with barley, the number of cases of beriberi (a medical condition due to vitamin deficiency) among officers decreased. Thanks to these navy kitchen specials, comparably easy to cook and serve foods like kare (curry) and korokke (croquettes), began to be sold at yoshoku stalls and casual eateries, and their popularity even extended to wealthy households.

The Taisho Period (1912-1926) saw the appearance of restaurants on the upper floors of department stores, where rich families became regulars, and those restaurants became the prototype for today’s family restaurant (casual dining establishments that cater to families with children). The Great Kanto Earthquake in 1923, which devastated cities in Tokyo and Yokohama, Kanagawa, was a significant turning point in Japanese lifestyles and eating habits. Before then, yoshoku was luxury food enjoyed mainly by the rich or poseurs, but after the Earthquake, yoshoku was reshaped in true Japanese fashion, and took root in ordinary people’s diets.

After WWII, French or English cuisine-based yoshoku began to absorb American food culture. The most significant ingredient was ketchup, which spread widely and led to the appearance of Spaghetti Napolitan (ketchup-flavored spaghetti stir-fry).

World War II temporarily disrupted authentic Western food culture in Japan. Due to lack of supplies, cooks had to arrange dishes using whatever was available, and therefore the Western cuisine served at restaurants during this period was initially lacking in quality. This accelerated the development of uniquely Japanese-style yoshoku. The US Occupation provided easier access to ketchup and bacon, and distinctively Japanese Western-style cuisine such as hambagu and Napolitan Spaghetti appeared. As the standard of living improved, stew and spaghetti were added to school lunch menus. Thus, yoshoku became more familiar to ordinary people and, consequently, became a staple of Japanese food culture. 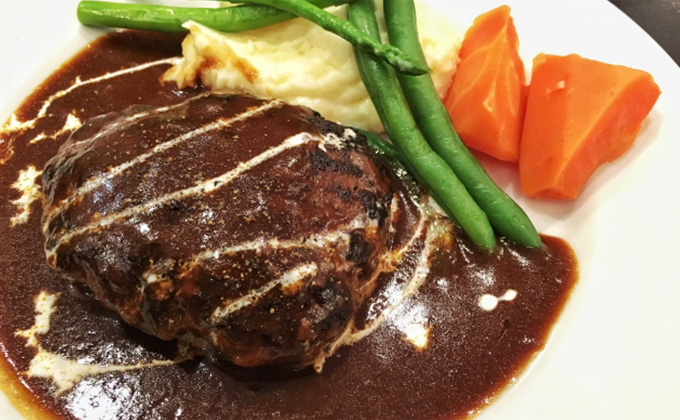 Minced meat (beef or a mix of beef and pork) is kneaded well with sautéed, chopped onions and breadcrumbs, with eggs as a binder, and grilled. It is served with a variety of sauces, from demi-glace sauce to Japanese-style, soy sauce-based sauce with grated daikon garnish. 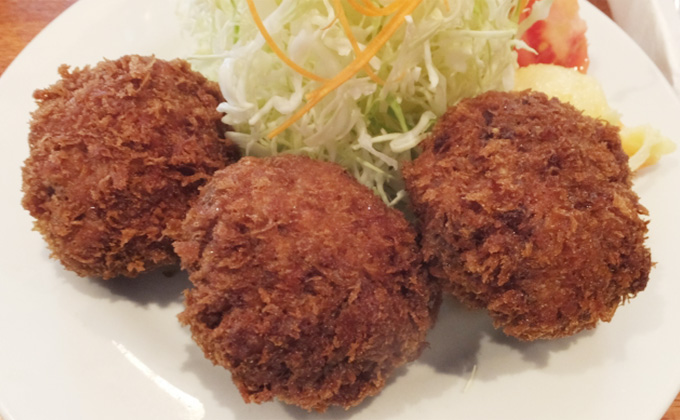 Menchi-katsu is deep-fried, breaded burger patty. It was a specialty at Restaurant Kamiya established in Tokyo in 1925. 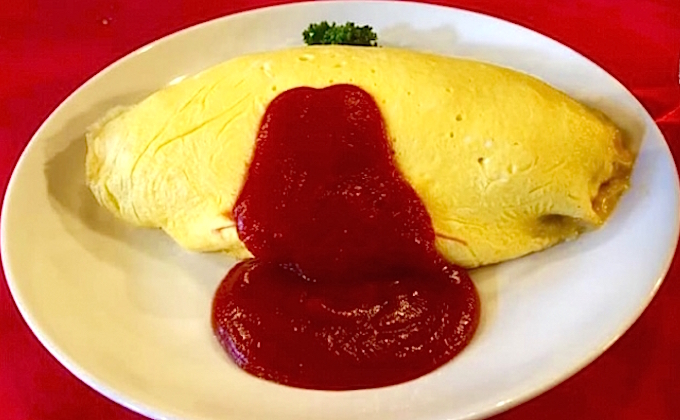 Omuraisu is a dish native to Japan, but the name is derived from “omelette” in French and “rice” in English. Omuraisu is one of the three major items served at Japanese yoshoku restaurants, along with kare-raisu (curry with rice) and hayashi-raisu (hashed beef with rice). The most typical omuraisu is prepared by stir-frying rice with chicken, onions, and other vegetables, and then seasoning this mixture with ketchup. The rice is then wrapped in a thin omelet and topped with more ketchup. Read more about omuraisu. 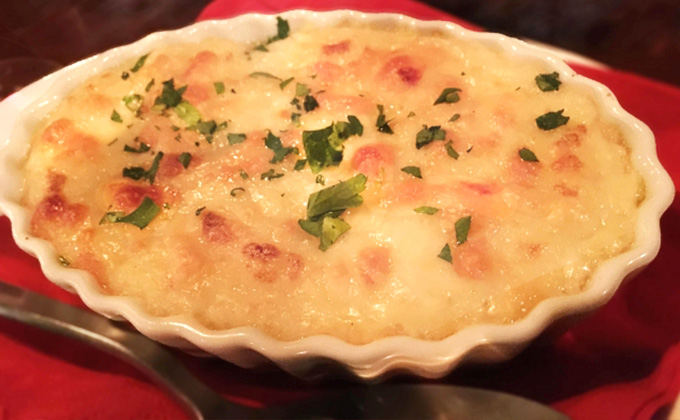 Guratan, in Japan, is usually prepared by mixing chicken, seafood such as shrimp, mushrooms and onions, with macaroni with béchamel sauce, topping it with breadcrumbs or cheese, and grilling it in an oven until the surface is lightly browned. 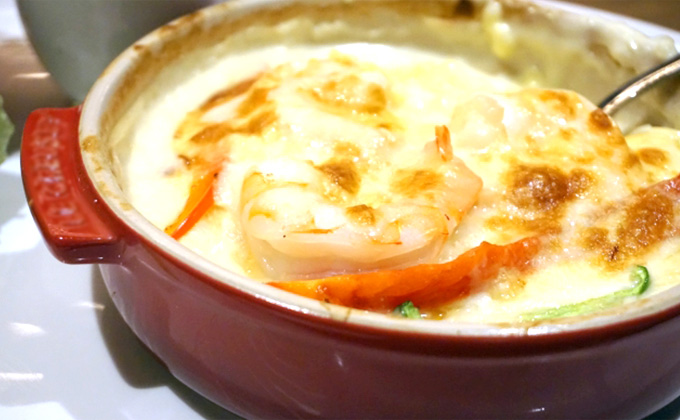 Doria is like rice au gratin, which is made by grilling béchamel sauce-covered pilaf in the oven. It is considered to have been invented by First Executive Chef Sally Weil, at Hotel New Grand in Yokohama City, Kanagawa. 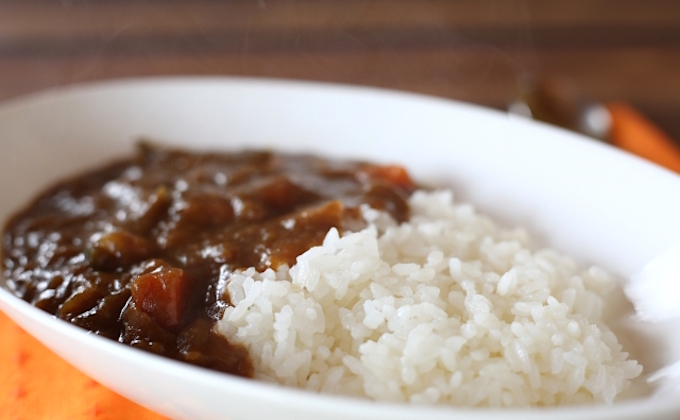 Kare raisu is stewed meat and vegetables seasoned with curry powder (or a variety of spices) over rice. Read more about kare raisu. 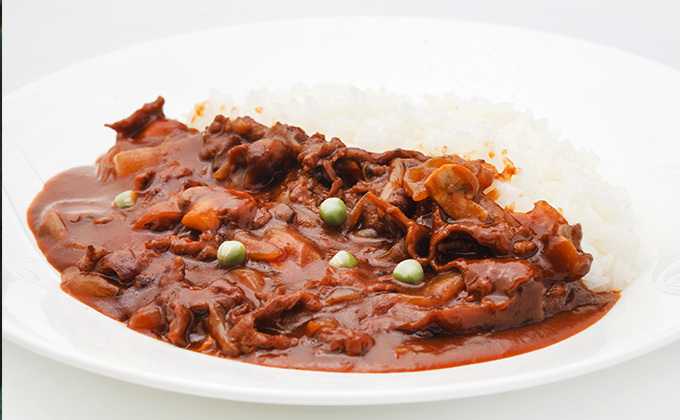 Sliced beef and thinly sliced onions are sautéed and stewed in demi-glace sauce, then poured over rice. 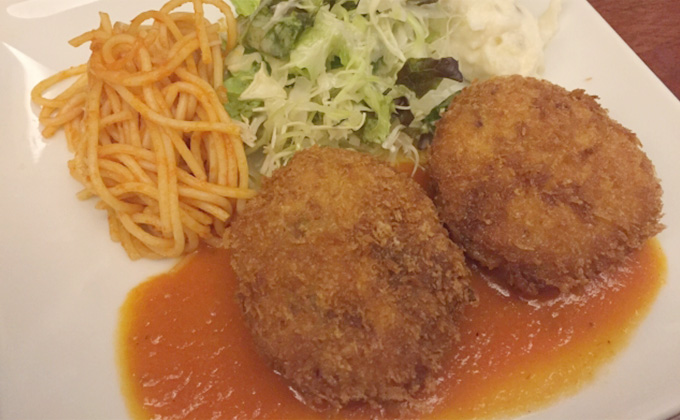 Boiled or steamed potatoes are mashed, mixed with other ingredients like chopped onions and minced meat, and then shaped into balls. The balls are coated with flour, egg yolks and breadcrumbs before being deep-fried. There are also kurimu korokke, which are creamy croquettes made with béchamel sauce and other ingredients, typically seafood such as shrimp and crab. The recipe is said to have been passed down by an English cook who came over to Japan when it opened up to the world. 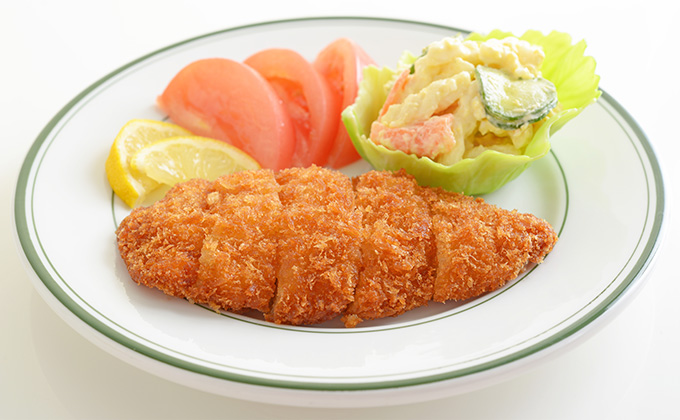 In 1899, Motojiro Kida, who was the founder of Renga-tei, a Western cuisine restaurant in Ginza, added pork cutlets to the menu. Taking its cue from tempura, meat was successively dredged in flour, eggs and breadcrumbs, then deep-fried in plenty of oil. The garnish was initially cooked vegetables, but later on, cabbage was chosen because it is available throughout the year. Read more about tonkatsu. 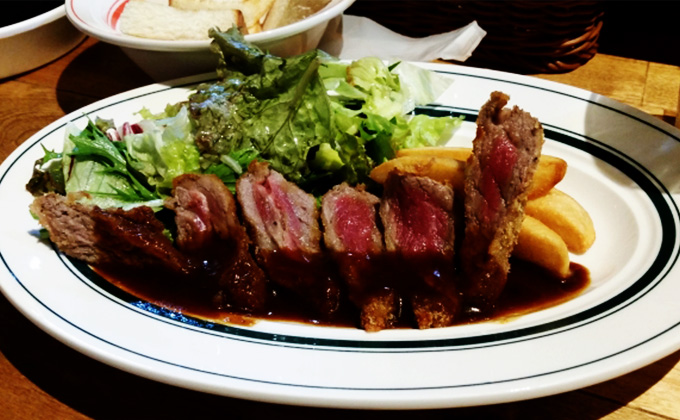 Sliced beef is coated with flour, beaten eggs, and breadcrumbs, then deep-fried. 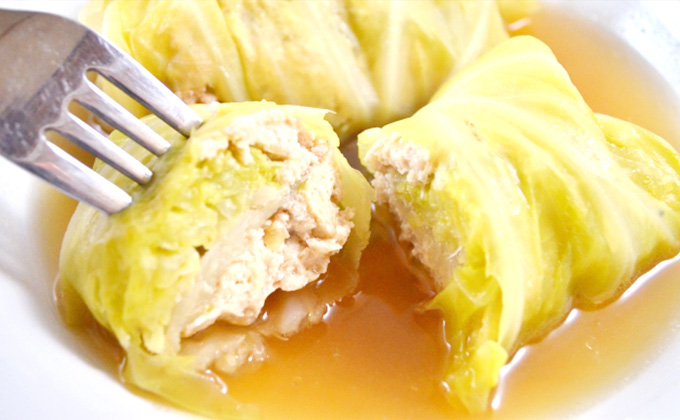 A filling, made from minced meat and chopped vegetables, is rolled in boiled cabbage leaves to make a rice sack shape, then stewed. The dish can be finished in various sauces, including bouillon, tomato sauce and béchamel sauce. 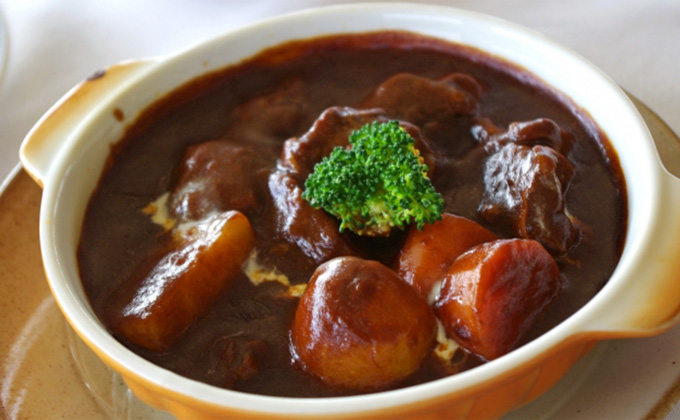 Beef and vegetables, especially potatoes, carrots and onions, are stewed in red wine, bouillon, and demi-glace sauce for a long time. 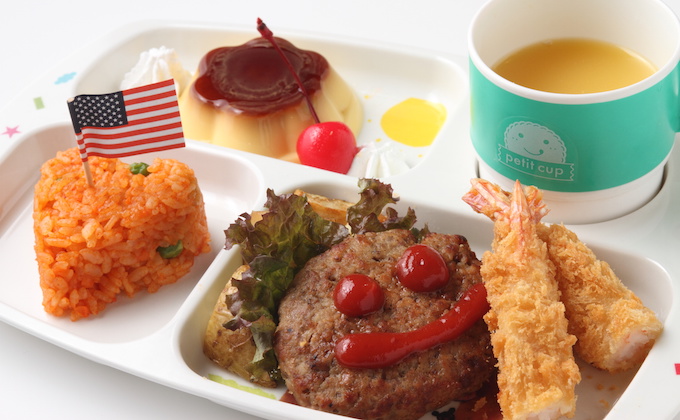 Okosama Ranchi originated in 1930, with the “Okosama Yoshoku” (child’s yoshoku) developed at Landmark Restaurant in the Mitsukoshi department store. The meal, which consists of small portions of popular yoshoku dishes on one plate, became a big hit, and other department store restaurants followed suit. 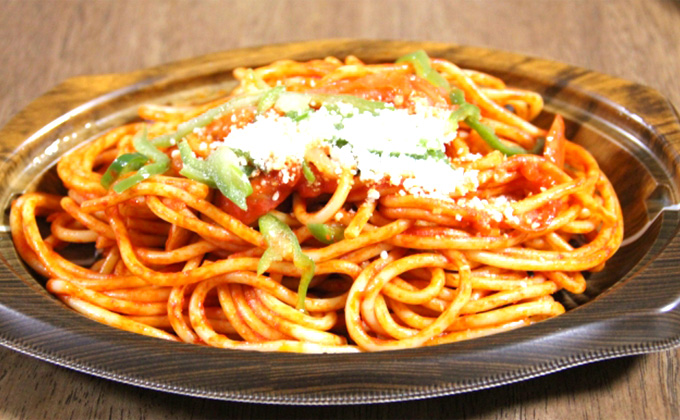 Boiled spaghetti is rinsed in water, stir-fried with bacon and vegetables such as green peppers, then flavored with ketchup. Spaghetti Napolitan is thought to have been derived from the old, French, tomato sauce-based spaghetti dish named Spaghetti à la Napolitaine. The tomato sauce was replaced by tomato ketchup, and developed into the one served today. 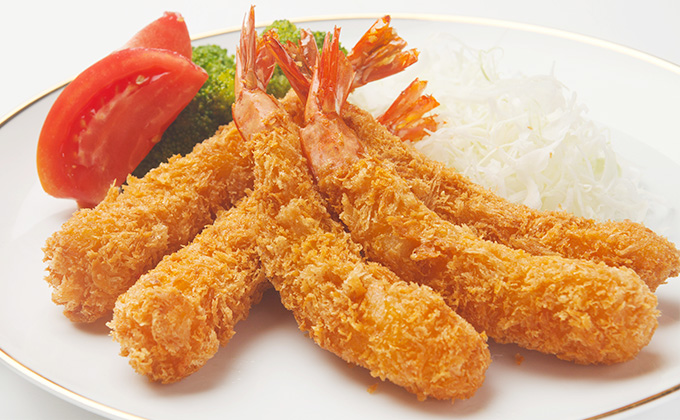 Big shrimp are coated with flour, beaten eggs, and breadcrumbs, then deep-fried so they remain straight. Other kinds of furai (deep-fried, breaded food) such as kaki furai (fried oysters) and aji furai (fried flayed horse mackerel) are also popular.