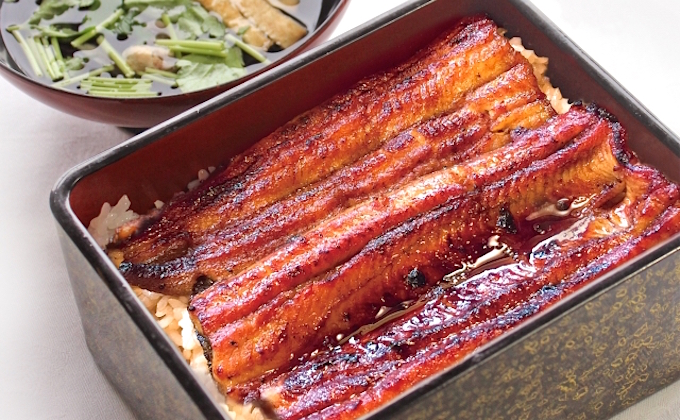 Unagi is a long, thin fish without a pelvic fin that has been familiar to Japan since ancient times. It is traditionally eaten on the Day of the Ox (equivalent to Midsummer’s Day) to provide strength and alleviate suffering in the sweltering hot days of summer. Unagi contains rich nutrients including vitamins necessary to face the debilitating heat of summer. Moreover, it is easy to digest, and good for stomachs and intestines weakened by cold foods and beverages.

The main feature of the fish is its slimy skin. The skin secretes proteins called mucin and mucoprotein, and these substances give it the distinctive sliminess. These slimy substances help body hydration and skin respiration. They also help adjust the osmotic pressure so that unagi eels can live in completely different environments such as freshwater and the sea, and still protect their weak skin.

In 2014, the Japanese eel was declared an endangered species. Currently, most unagi are bred on eel farms by raising juvenile fish that are born in the wild. Tiny (0.2-gram) glass eels caught by fishermen are purchased by unagi farmers, and then raised until the fish weigh 200-300 grams. The number of glass eels, however, is sharply declining recently. Within Japan, it is commonly believed that this is because of environmental changes or some other reason. Internationally, it is generally agreed that eels are endangered because of exploitation, as Japan currently consumes approximately 70% of the eels in the world.

It is said that the population of eels can be sustained if the practice of catching glass eels is halted for several years. One solution would be to develop the complete farming of eels. Unlike catching and raising wild glass eels, complete farming would mean incubating eel eggs, growing the baby eels with special feed, then artificially fertilizing and hatching the eggs.

Eel eggs were successfully incubated by Hokkaido University in 1973. In 2002, The National Research Institute of Aquaculture (Fisheries Research Academy: FRA) in Mie Prefecture succeeded in raising baby eels until they became glass eels, but 90% of them did not survive because scientists could not figure out what baby eels eat. In 2009, the spawning grounds of wild eels, which had been unknown until then, were located. After figuring out the life cycle of glass eels, the best habitat and feed for them, more than 90% of the farmed baby eels successfully reached adulthood. In addition, it has become possible to raise fertilized glass eels in large-scale aquariums. If eels can be bred on farms from the start, we will no longer disrupt the ecosystem. The Japanese Environmental Agency is working to make this breeding system economically viable by 2020.

The idea of doyo originates from the Chinese Five Elements Theory, which claims that all substances are divided into one of five basic elements: wood, fire, earth, metal and water.

When matching the five elements to the four seasons, wood is assigned to spring, fire to summer, metal to autumn and water to winter. But, earth is left out.

Therefore, as earth exists in all seasons equally, the period of time from 18 days prior to the first days of spring, summer, autumn and winter, when the seasons change, were assigned to earth and called “doyo.”

What is Ushi no Hi (Day of the Ox)?
Ushi (ox) is one of the twelve Oriental Zodiac signs, and ushi no hi means the day of the ox during the doyo period. There is a Day of the Ox in each season, but generally, doyo refers to the one in summer, before the first day of autumn.

Why do Japanese people eat eels on the Day of the Ox?
According to a theory, an unagi restaurant was suffering because eels were not selling well, and consulted Gennai Hiraga, who was a genius in Edo and is presently called the Da Vinci of Japan.

Gennai made a sign and put it on the wall. It said, “Today is the Day of the Ox, the day of eels.” Thus, unagi sales took off.

The doyo period in summer is usually the hottest time of the year and people become exhausted from the heat. Therefore, people traditionally chose to eat energy enhancing foods. In addition, people during that time believed that eating something with a Japanese kana letter “u” (う) was good for health. Thus, unagi fit well with the existing traditions and beliefs already widely spread among common people.

Kansai: The eel is cut down the stomach and grilled without steaming. In the Kansai area, there is a strong commercial culture, so the eel is split from the stomach, because people tend to be more open and spill their guts.

The History of Unagi Dishes

The earliest mention of unagi appears in the famous anthology of ancient Japanese poetry, Manyoshu.

“To Ishimaro I say, ‘Unagi is said to be good to prevent loss of weight in summer, so you should have some.’” Otomono Yakamochi, a celebrity poet in the Nara Period, composed this poem, poking fun at his old friend, Yoshidano Murajioyu’s weight loss by recommending the consumption of unagi. Supposedly, unagi had already been credited with an ability to provide energy and strength by then. In those days, unagi used to be called munagi (muna [mune] means “chest” and gi [ki] means “yellow” in Japanese), because the chest (belly) of unagi was yellow and it resembled ridge beams (munagi in Japanese). It came to be called unagi around the 12th century.

In the Heian Period (794-1185), the nobility liked to eat steamed-in-the-basket eel with a salty flavor (shiromushi), and in the Muromachi Period (1392-1573), the first writing on grilled eel (kabayaki) appeared in 1399 in the records of the Suzukas, who were Shinto priests at Yoshida Shrine in Kyoto. The written recipe is different from that of today, however. Unagi was chopped into thick pieces that were then skewered and grilled. The grilled eel was eaten with salt, miso paste mixed with vinegar, and vinegar mixed with mustard. Grilled unagi took its current form between 1781 and 1789, when Genba Tanaka, the fifth CEO of modern day soy sauce company, Higeta Shoyu, in Choshi City, Chiba, first produced dark (koikuchi) soy sauce. This koikuchi soy sauce fit the taste of the Edoites and became all the rage. Thus, the recipe of kabayaki was established and has been passed down until today. Unadon (a bowl of rice with grilled eel on top) appeared later. According to the book Zokuji Hyakko Kigen, written by Masayasu Miyagawa, unadon was created by Imasuke Okubo, who was a funder for theatre productions in Sakaimachi (today’s Ningyo-cho) in the late Edo Period. 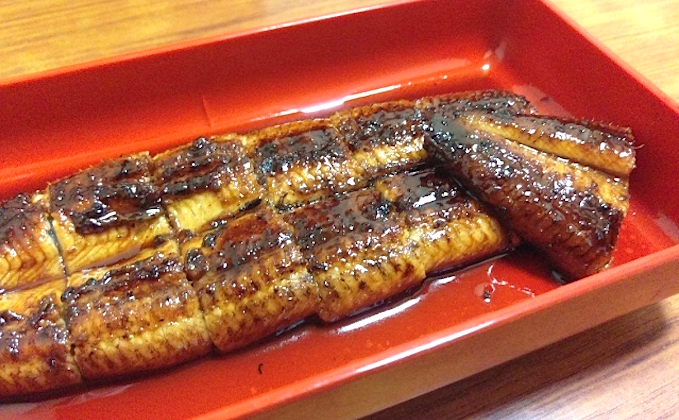 Kabayaki is grilled eel (without head or tail) prepared by splitting and boning, skewering, then grilling while basting a sweet unagi sauce made from soy sauce, mirin (sweetened sake), sake and sugar. People say that to master skewering takes three years, splitting, eight years, and grilling, a lifetime. Needless to say, mastering the preparation of good kabayaki takes a long time. 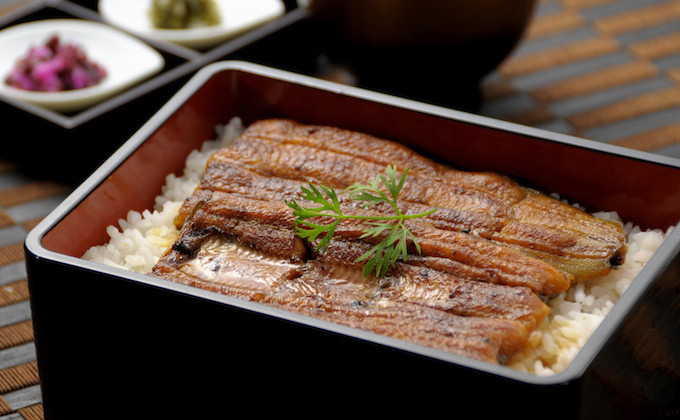 Unadon is kabayaki (grilled eel) over rice in a bowl. If the serving dish is a lacquer box instead of a bowl, the dish is called unaju. In order to eat fatty unagi with a refreshing taste, sansho Japanese pepper, which helps digestion, is sprinkled on top. 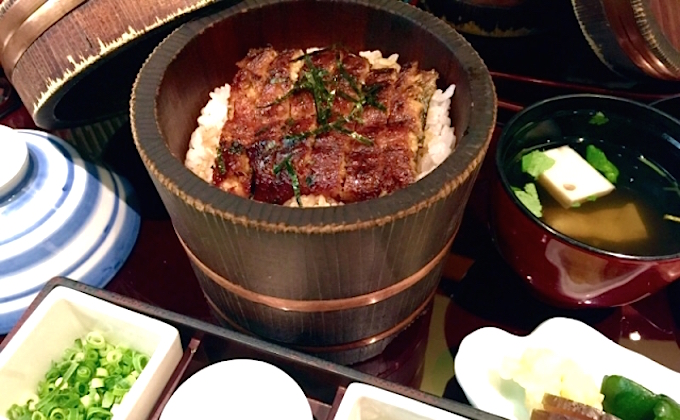 Hitsumabushi is a local specialty dish in Nagoya, Aichi Prefecture. It is shredded grilled eel over rice. Hitsumabushi is usually served with condiments such as wasabi, chopped nori seaweed and spring onions, and dashi broth or tea. You may enjoy a variety of tastes by teaming up with what you like or eating it as ochazuke (rice and toppings with green tea broth poured on top). 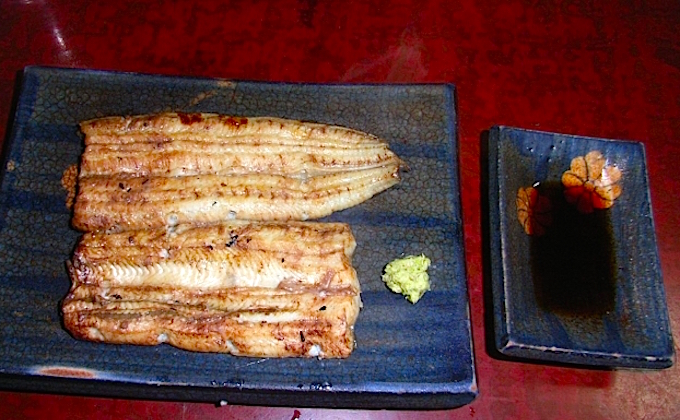 Also called suyaki, shiroyaki is eel grilled over a flame without sauce, other seasonings or oil. This way of preparing eel gets rid of excess fat, condenses flavor, and also nicely chars it. Shiroyaki is usually eaten with wasabi and soy sauce. 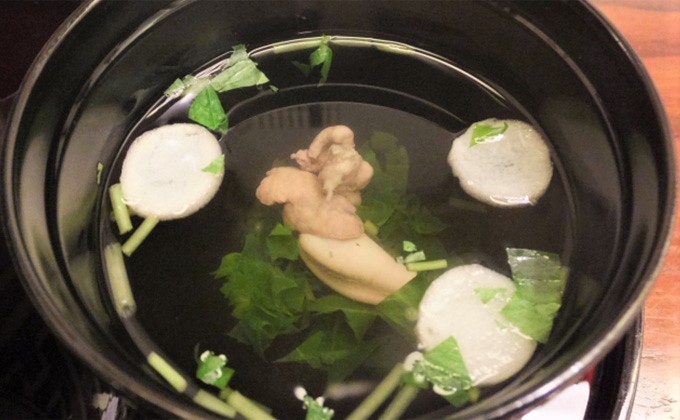 Kimosui is a clear soup with eel liver. It is usually served with unadon or unaju. Eel liver contains less fat than eel meat and is rich in vitamin A, which strengthens the immune system. Kimosui, therefore, is good for the health. 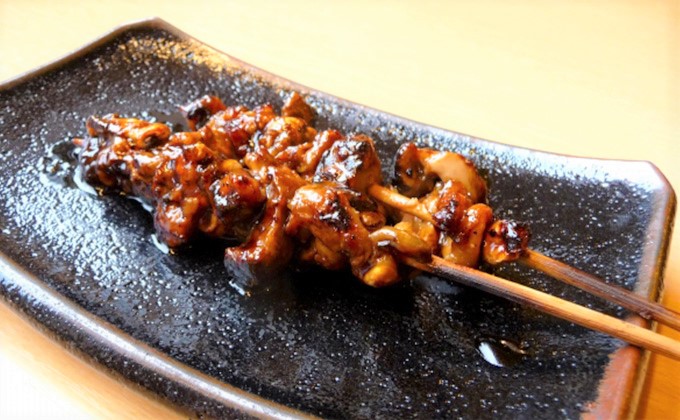 Kimoyaki is grilled eel livers basted with a sweet unagi sauce. Only one liver can be taken from each eel, but a skewer of kimoyaki contains several. The preparation method is similar to kabayaki, but kimoyaki is not very popular because of its distinctive texture and bitterness. It is a popular nibble for people who drink alcoholic beverages, however, because of the sweet sauce and pleasant bitterness. 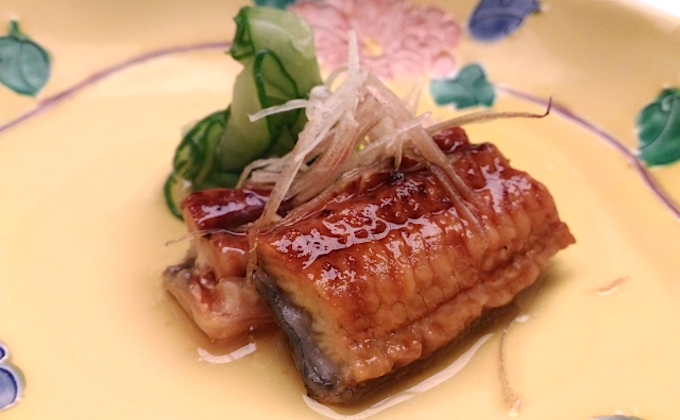 Uzaku is shredded, freshly grilled kabayaki, with chopped and salted cold cucumbers mixed with vinegar. Uzaku is an addictive dish where you can enjoy the contrasts of hot and cold, and rich and light tastes. 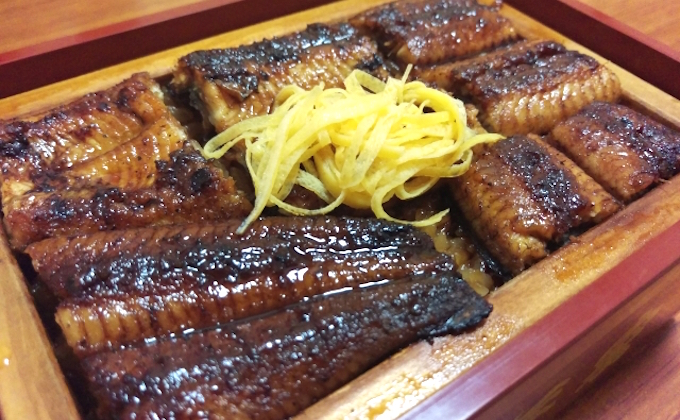 Seiromushi (Eel Steamed in a Basket)

Seiromushi is a local specialty in Yanagawa City, Fukuoka Prefecture. It is steamed rice, laced with unagi sauce and topped with kabayaki, which is steamed, again, in a bamboo steamer and garnished with thinly shredded fried eggs. On first sight, it looks like unaju, but the steaming allows the flavors of the sauce and the savory kabayaki to soak well into the rice.

Kabuto-yaki is several skewered eel heads, grilled-as-they-are, or split and basted with a sweet unagi sauce. It is a savoury dish and a perfect nibble.

Kurikarayaki are offcuts from splitting eels, which are then wrapped around a skewer and grilled with a sweet sauce. The name “kurikara” derives from the Kurikara sword, which is a sword that Acalathe, God of Fire, holds to conquer the devil. The sword is twined around by a dragon and surrounded by fire.

Hansuke is another name for eel heads. There are several theories concerning the origin of the name. One theory claims that this dish was sold at half an ensuke (1 yen). Another claims that a man called Hansuke was earning some money by selling eel heads in the Meiji Period. Hansuke is a simmered dish from Osaka, made from several eel heads, grilled tofu and spring onions with sugar and soy sauce.

Unagi pie is a Western style confectionery, sold by Shunkado Co., Ltd., and a local specialty in Hamamatsu City, Shizuoka. It is made with unagi bone soup powder. When Koichi Yamazaki, the second representative of Shunkado, was travelling and considering how to make new confectioneries unique to Hamamatsu, he was asked where he was from by a local, and answered, “From Hamamatsu.” The local did not know where Hamamatsu was and Yamazaki told that it was around Lake Hamana. Then the local responded, “Oh, it is famous for delicious eels”. At that time, Hamamatsu was not very famous and instead Lake Hamana was well known. People instantly associated Lake Hamana with eels. Yamazaki decided to make a confectionery on the theme of eels, and unagipie was born. Please note that Unagipie does not taste like eels.