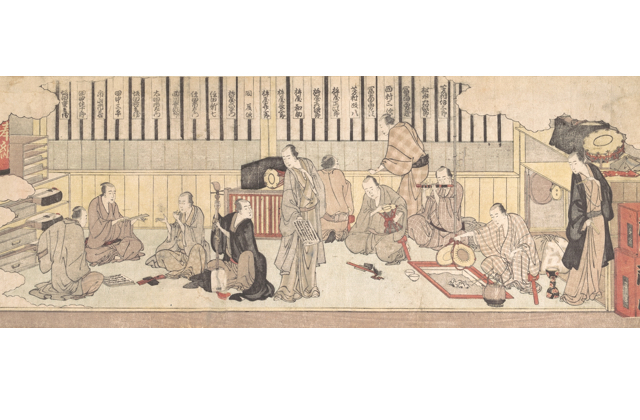 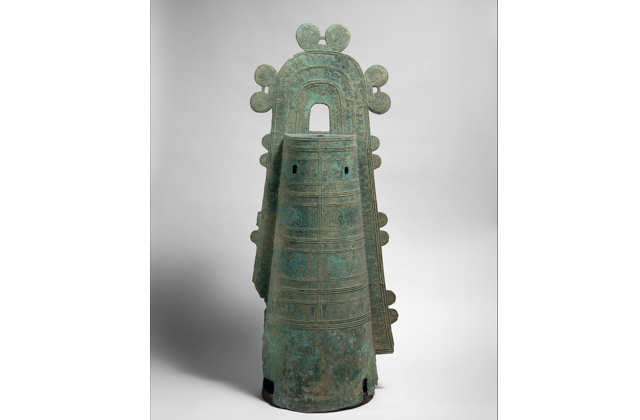 Archaeological findings show that Japanese people made rustic flutes with a single hole out of stone and clay in ancient times, before various musical instruments were brought from China and the Korean Peninsula. Before the 3rd century, ocarina-like flutes with multiple holes for playing tunes were introduced from China, and hollow clay figures playing a small zither have been discovered from the archaeological sites of more than 1,000 years ago. Also discovered were dotaku, large bell-shaped instruments with complex decorations made from bronze, which are considered to have been used in rituals. 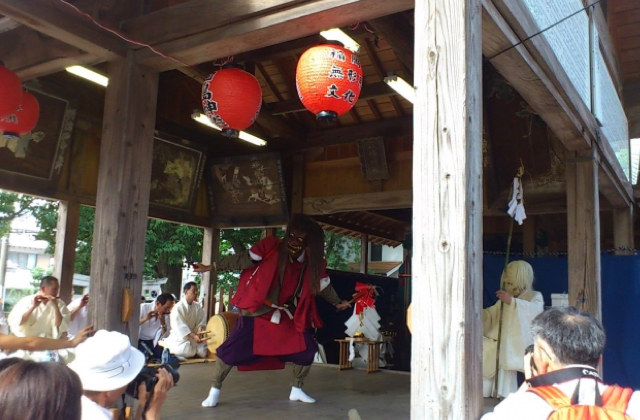 At first, musical instruments were played mainly in ensembles (gagaku). Later, playing musical instruments such as the koto, (13 stringed Japanese zither), fue (flutes) and sho (a reed instrument resembling panpipes) became an art that nobles and samurai were required to learn. It was not until the late 16th century that common people began playing a stringed instrument called the shamisen. Until that point, they had been playing simple flutes, drums and bells for folk performing arts and rituals dedicated at temples and shrines, like the Kagura and Dengaku dances.

In Japan, music has been passed down basically through oral instruction from masters to their followers. Students were expected to learn by carefully observing and intuitively feeling how and what their teachers play, and rote learning was the key for mastering a musical instrument. In the past, there was not yet any universal musical notation (for example, a shakuhachi player could not read a koto score), so written music was just an aid. It was common for teachers to tell students what to learn next, and even if they wanted to learn a specific piece of music, they could not do so until the instructor said okay.

Japanese traditional musical instruments are, as is true around the world, made from what is available in the area. Bamboo is abundant in Japan, so naturally, bamboo is the obvious choice for making wind instruments, because there is no need to hollow it out.

Compared to Western musical instruments, Japanese traditional musical instruments have been simple in terms of structure and sound-producing mechanisms. The sounds have unstable pitches and include “noises” (unpitched sounds), both of which add a complex harmony to the music. 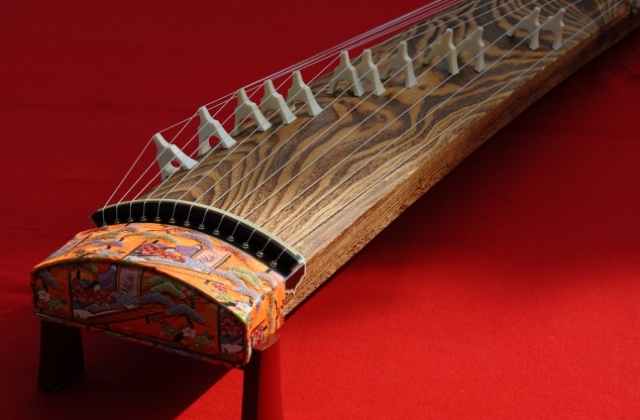 The thirteen-stringed koto was brought to Japan in the 8th century from China, and its use is widespread. The body is made of paulownia wood, and thirteen silk (currently nylon is more common) strings are stretched in parallel over the body. The instrument is tuned by sliding movable bridges, and sounds are made by plucking the strings with plectra worn on the thumb, index and middle fingers. The koto was originally played in gagaku (court music ensembles), then spread among the common people in the 16th century. It is usually played solo, as accompaniment to songs, or as part of an ensemble with shamisen and shakuhachi (or kokyu, a traditional stringed instrument). In present times, the koto is often played along with Western instruments, too. 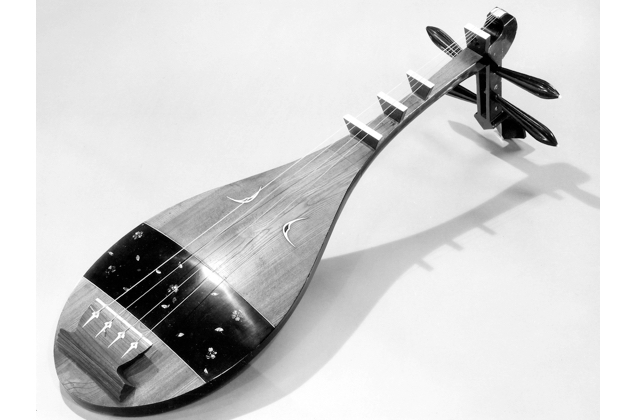 The biwa is a pear-shaped instrument with four or five strings. Four or five frets are attached to the body, and it is played with a large wooden plectrum (bachi). Thought to be of Persian origin, the biwa was brought to Japan in the 8th century via Central Asia, China and the Korean Peninsula.

There are roughly two types of biwa: one is gakubiwa, which is used in gagaku to keep rhythm, and the other is mosobiwa, which was used for religious music accompaniment by priests who were blind (biwahoshi) and later developed into satsuma biwa and chikuzen biwa. The performance style of accompanying recitations of stories became popular, and heike biwa was used in heikyoku, which established the narrative music genre. 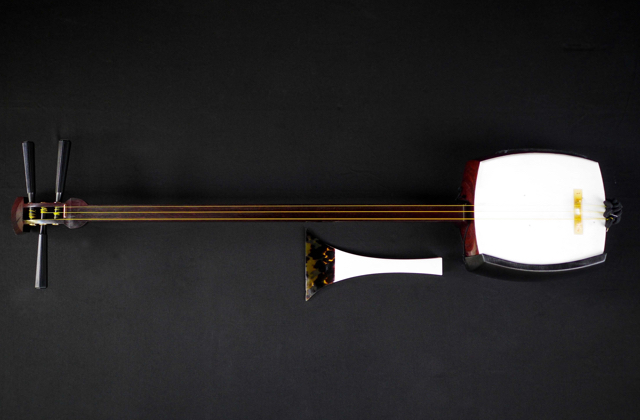 Considered to have been brought to Japan by the mid-16th century, the shamisen (also called sangen (literally, three strings) is a plucked string instrument similar to the three-stringed lute, the Chinese sanxian and Ryukyu’s (Okinawa) sanshin. Its final form was developed mainly by biwa players who were blind. They changed the round shape to a square, the snakeskin to cat or dog skin, and the strumming to a plectrum instead of picks or fingers. The shamisen can play a wider range of pitches than the biwa, enabling the musician to play tunes in different scales more smoothly, and creating a stronger sense of rhythm.

In the 17th–19th centuries, the shamisen came to be used for Kabuki theater, the Bunraku puppet theater, popular and folk performing arts, song accompaniment like jiuta, and in-chamber music called sankyoku (an ensemble with koto and shakuhachi or kokyu). Through this exposure, the instrument gained tremendous popularity. 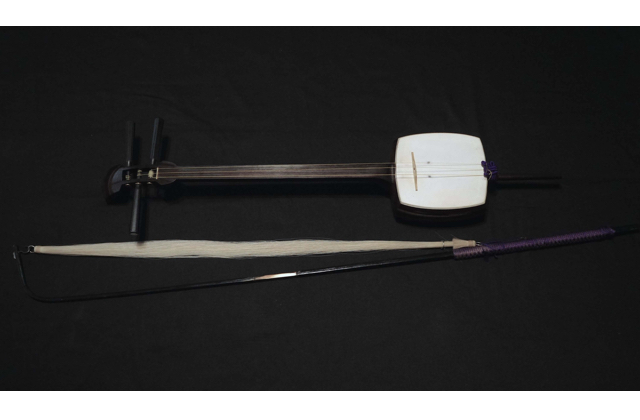 Among Japanese traditional musical instruments, the kokyu is the only stringed instrument played with a bow. Kokyu has a small shamisen-like body and three to four strings. The horsetail bow is loose, and tension is adjusted with fingers, at the bottom of the bow, while playing. In the 17th–19th centuries, kokyu was frequently played in ensembles with the koto and shamisen. This form of chamber music is called sankyoku (literally, three compositions). The sounds of kokyu are effectively used for sad and emotional scenes in Kabuki Theater.

Fue in Japanese refers to wind instruments, especially reedless transverse flutes. In Japan, most of the wind instruments are transverse. The fue has a long history, and both Kojiki (Record of Ancient Matters) and Nihonshoki (Chronicles of Japan), classical Japanese history books, mention this instrument.

There are a variety of transverse flutes. Kagura-bue, ryuteki and komabue are used in gagaku. In the 14th–16 centuries, as the Noh art form emerged, the nohkan was created from the ryuteki. Nohkan is used in the lively music of Gion Matsuri Festival in Kyoto. Later, shinobue was created so that it can make soft, gentle sounds to fit in songs, and it is used in folk performing arts and festivals nationwide, as well as in music ensembles for Kabuki theater. The surface of the bamboo flute is left as is, or thin strips of bark are wrapped around and fixed with lacquer in order to avoid cracks. The latter finish is well-suited to the Japanese climate where humidity levels are erratic. The structure itself is very simple, just six or seven finger holes and a mouthpiece, and requires no special device. Breathing and fingering techniques have the greatest effect on the quality of the pitch, producing delicate, yet deep, sounds. 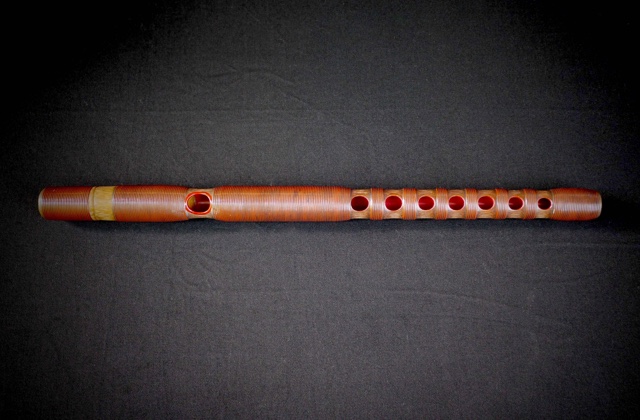 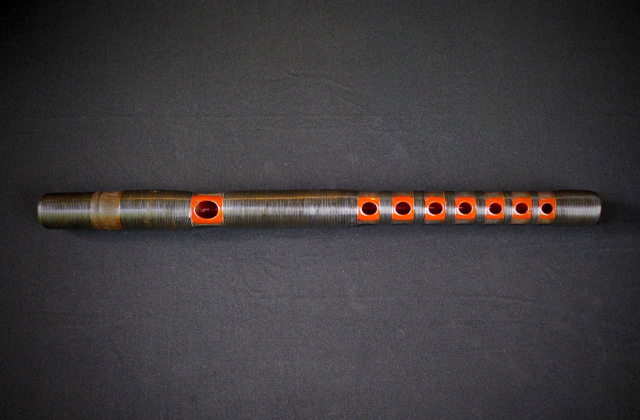 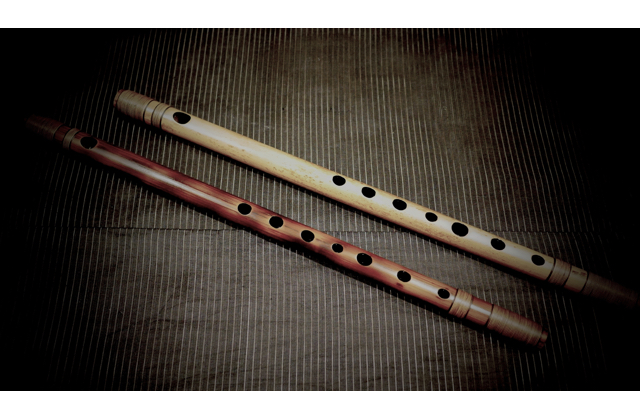 Brought to Japan from the Tang Dynasty in the 8th century, shakuhachi was originally played in gagaku ensembles. At that time, the number of finger holes was six (today it’s five), and the flute was sometimes made from stones and the sharp teeth of animals, as well as bamboo. This musical instrument was a favorite among nobles, and appears in the famous book Tales of Genji, but in the 12th century, shakuhachi was no longer included in gagaku performances. Today’s shakuhachi playing style originated from the religious music performed in place of reciting mantras by komuso (wandering monks) in the Edo Period (17th–19th centuries), when the use of this instrument was limited to them. After the late 19th century, shakuhachi spread among the common people, and was played in ensembles with shamisen, or as folk song accompaniment, as well as in virtuosic solos. Hichiriki originated from the Western Regions of China, and was brought to Japan just around the beginning of the 8th century as an instrument for gagaku music.
Made of bamboo, hichiriki is a vertical wind instrument played with a double reed called a rozetsu, like the oboe. It has nine holes. Thin strips of cherry bark are wrapped around the outside and the surface is finished with lacquer. Rozetsu are made by flattening the dried stems of common reeds, and a rattan ring is attached, which adjusts the opening of the reed blades. When it is not in use, it is covered with a cap made from Japanese cypress. Before being inserted into the bamboo pipe, the bottom part of the reed is wrapped with Japanese paper. The size is just around 18 cm long, but it can make big sounds. Hichiriki gradually changes pitch by intonating sounds. 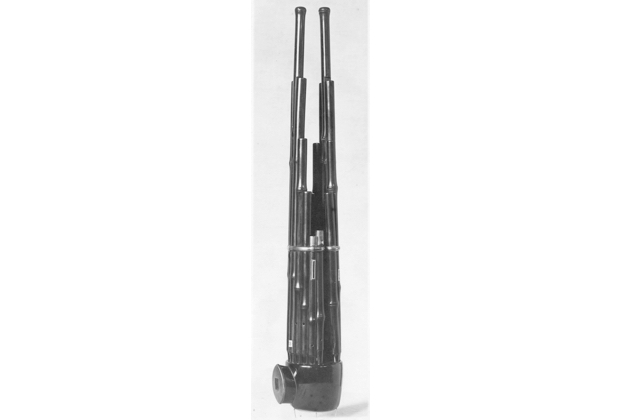 Thought to originate from China or Southeast Asia, the sho consists of seventeen bamboo pipes fitted in a cup-like wood base called a kashira. Brought to Japan via China by the early 8th century, this instrument has been used in gagaku. Fifteen of the seventeen bamboo pipes have a metal reed attached to the bottom, each of which has a finger hole. When the holes are covered and air is directed into or out of the mouthpiece, the sho produces sounds by driving air through the pipes. Like a harmonica, you can blow or draw to make a sound. Unlike many other Japanese traditional wind instruments, you can play five- or six-tone chords by covering multiple finger holes at the same time. The sho plays the role of leading the ensemble. 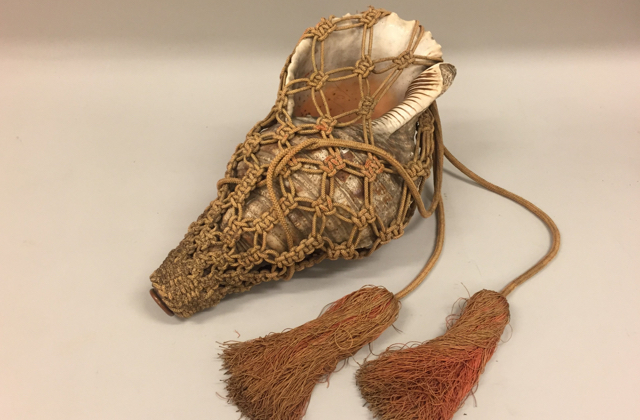 Horagai is made by cutting the tip of the largest species of spiral shellfish in Japan, creating a hole and adding a mouthpiece. It was introduced from China as a ritual implement of esoteric Buddhism during the Sengoku (warring state) Period, and was used as a means of communication and for encouragement during battle, too. Horagai uses the vibration from the player’s lips to make sounds, just like a trumpet.

Japanese taiko (drums) are roughly divided into three main groups: (1) Uchiwa (fan) daiko used in Buddhist rituals, and edaiko (a drum with a handle) used in the background music of Kabuki; (2) Shimedaiko made from a wooden body and tightened with rope, used for musical accompaniment, and okedo (barrel-body) used mainly in folk performing arts and festivals; and (3) Odaiko (big drum) in different sizes. There are also special drums including dadaiko used in the gagaku ensemble. The taiko is used not just for rhythm, but also to make sound effects including waves, rain and wind, as well as snow, in Kabuki theater and other performances. In Okinawa, there is also a percussion instrument called paranku, which is handheld and beaten while participants dance. 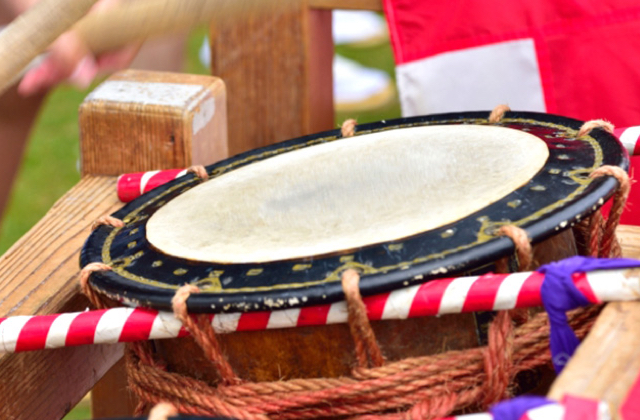 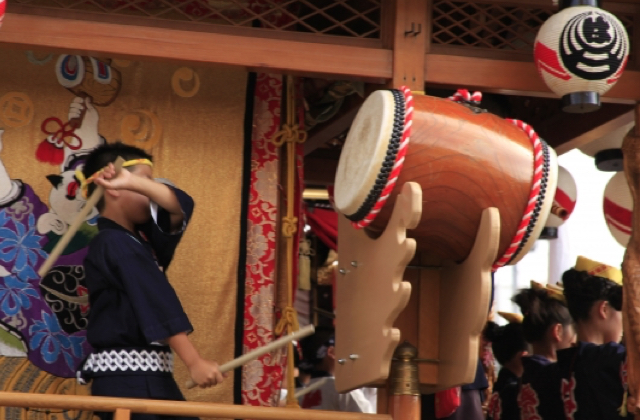 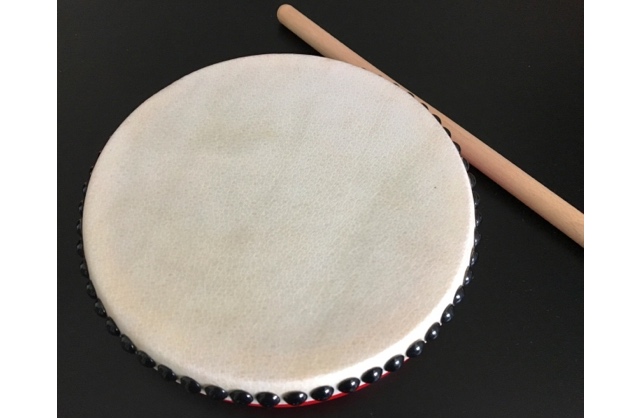 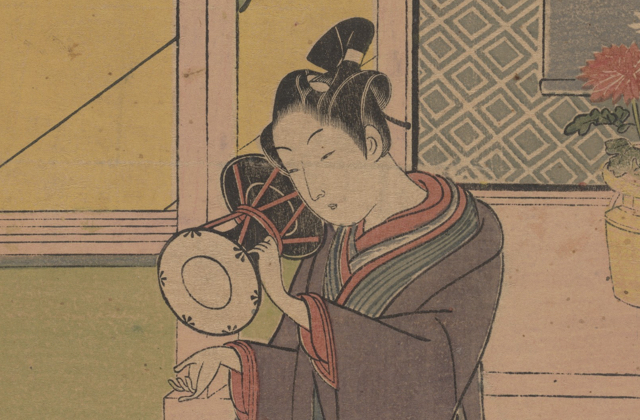 Tsuzumi is a kind of shimedaiko which has an hourglass-shaped body, with a frame for the drum skin. There are three types: kotsuzumi (small), otsuzumi (big), which is also called okawa (big skin), and sannoko. Kotsuzumi and otsuzumi are said to originate from India, and they became a part of the musical accompaniment of Noh drama along with nohkan and shimedaiko. Later, in the Edo Period (17th–19th centuries), they also became an essential part of Kabuki music. Tsuzumi are used in a variety of folk performing arts, and sannoko is played using sticks in gagaku. When playing the kotsuzumi, the drum skins are moistened, and the pitch and resonance are changed by tightening or loosening the cords. Contrarily, the drum skins of the otsuzumi are heated to make them dry, and tightly tied up so they can produce high-pitched sounds.

In general, metal percussion instruments are collectively called kane, and among them, those sounded by being shaken are called suzu. The term kane includes atarigane (a small brass gong) and small cymbal-like chappa. An atarigane with a thick body is called konchiki. The konchiki is used in the music accompaniment at Gion Festival in Kyoto, and has spread to festivals all over Japan. Chappa is used for background music or to create sound effects in Kabuki, for example, scenes that take place in China or the entrance of gods and Buddha. 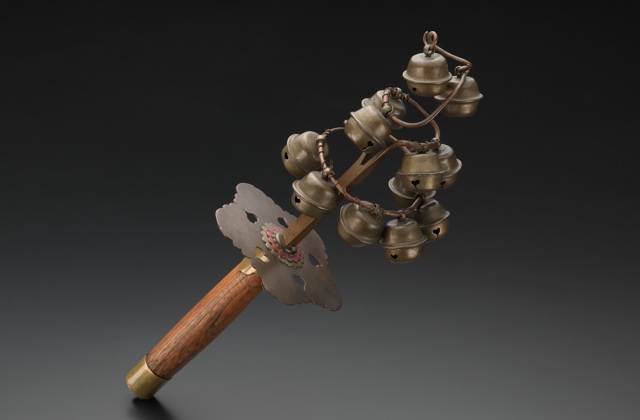 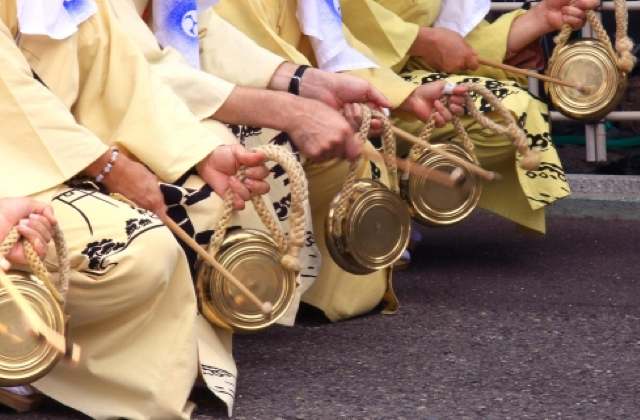 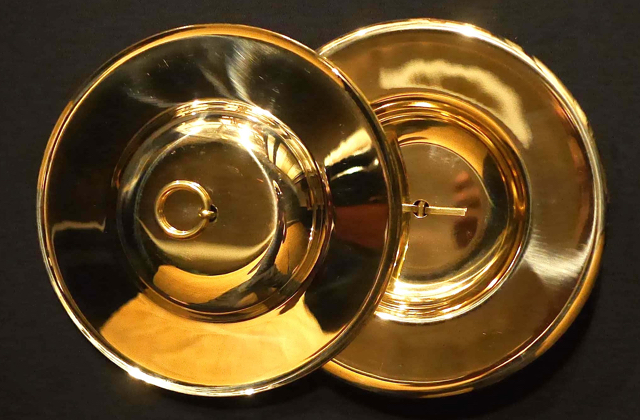