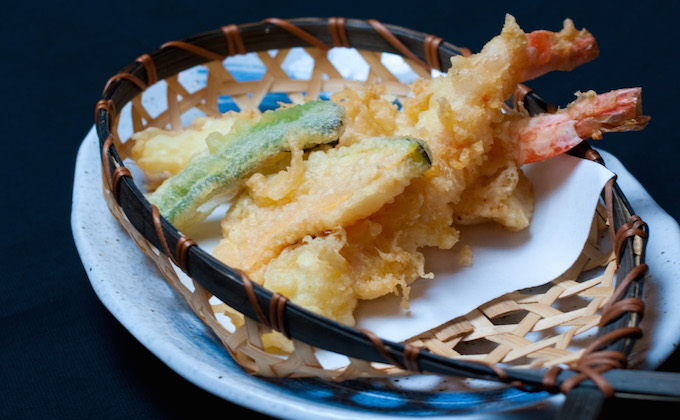 The History of Tempura

Tempura is not originally a Japanese dish. Its ancestor is linked to fritters introduced, alongside with guns, by Christian missionaries from Portugal, about 400 years ago (in the middle of the 16th Century). At that time, oil was highly valued and mainly used as a fuel for lighting, so tempura, which required a lot of oil, was considered a luxury food. The cooking method of deep-fat frying was introduced to Edo from Kyoto and Osaka. Deep-fried food was prepared in those cities from earlier times because there were many temples and shrines there. At the end of the 17th Century, cotton and rapeseed were mass-produced to process oil for lighting at temples and shrines, and oil-processing technology hugely improved. Thus, the price of oil plummeted and common people gained access to oil-cooked dishes. In Kyoto, especially, where people had easy access to oil, deep-fried vegetables, tofu, and konnyaku (devil’s tongue) were consumed as a part of shojin ryori (vegan cuisine cooked at temples).

In the Edo Period, oil production increased, and tempura’s availability gradually spread among common people. Tempura in that era was sold only at street-corner stalls. This is because houses were all made of wood, and the Tokugawa Shogunate feared the breakout of fires caused by tempura’s cooking oil. At these stalls, freshly deep-fried tempura was skewered and dipped in a soy-based broth with a condiment of grated daikon radish. In Edo, deep-fried seafood such as shrimp, scallops, conger eel, gizzard shad, and others, were referred to as tempura, while vegetable tempura was designated shojin-age. In Kyoto and Osaka, tempura was usually called tsuke-age, and tempura in Kyoto and Osaka meant food like satsuma-age (deep-fried fish cakes).

Tempura remained a food for common people in the Meiji Period (1868-1912), but as stalls gradually transformed, high-end restaurants specializing in tempura began appearing. Tempura was eventually elevated to the status of being a sophisticated and elegant food that was also easy to eat. It is now recognized, along with sushi, as a typical Japanese dish.

There are some arguments regarding the word “tempura.” Various theories claim that it is a Japanized version of a Spanish or Portuguese word, but the origin is not clear.

Tempura is a dish made by lightly dipping ingredients like seafood such as shrimp, vegetables such as eggplant and pumpkin, or meat into a batter of flour mixed with water, and then deep-frying them in hot cooking oil. The items are coated with a batter, so they are actually cooked in steam within the batter, even though tempura is a deep-fried dish. The ingredients are not cooked directly on a flame, so they are gradually and gently heated, and the aroma is contained within the batter.

There are some differences between tempura in Kanto and Kansai. Tempura in Kanto is deep-fried in sesame oil until golden brown, in a batter made with eggs. It is then dipped in tempura sauce and eaten. Tempura in Kanto was originally made with seafood produced in Tokyo Bay, the sea in front of Edo, so it was cooked in sesame oil to remove any fishy odors. On the other hand, in Kansai, especially in Kyoto, it was difficult to find fresh fish, so vegetables (including mountain vegetables) were deep-fried with a batter that did not contain eggs. Compared to the tempura in Kanto, the Kansai tempura’s color was lighter and it was eaten with salt.

Tempura is sometimes served as a topping on rice and noodles. These dishes are called: tendon and tempura soba noodles, respectively. Tempura is popular both at home, as an easy food to make, and as a typical Japanese dish at restaurants. 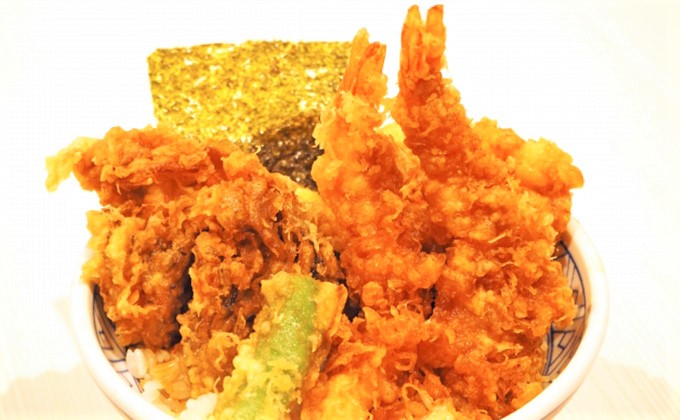 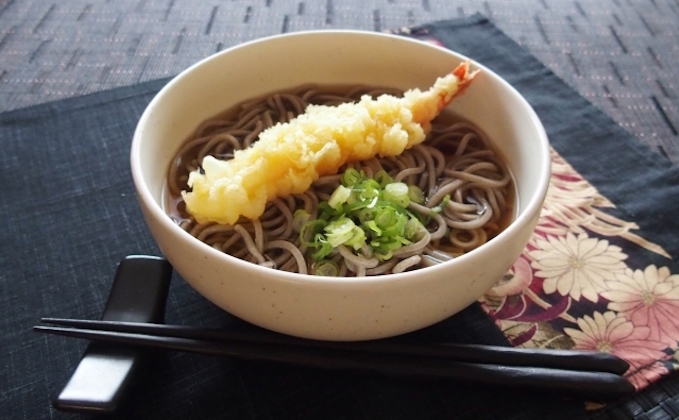 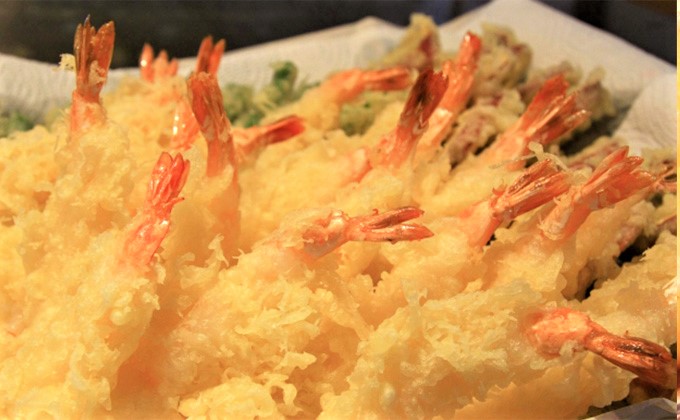 Shrimp is a common ingredient in tempura, with a wide variety of choices. From large tiger shrimp to small sakura (cherry blossom) shrimp, it is an ever-popular choice. 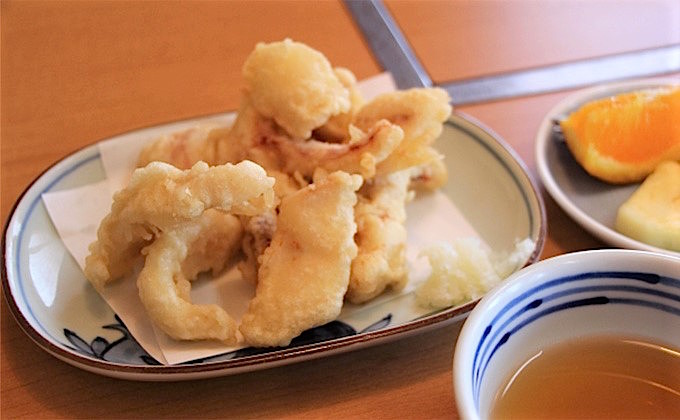 The combined texture of crispy batter and chewy squid is perfect. Tempura of squid legs is called gesso-ten. Squid tempura can be made with not only raw squid, but also dried squid. There are also some restaurants that serve tempura made with firefly squid. 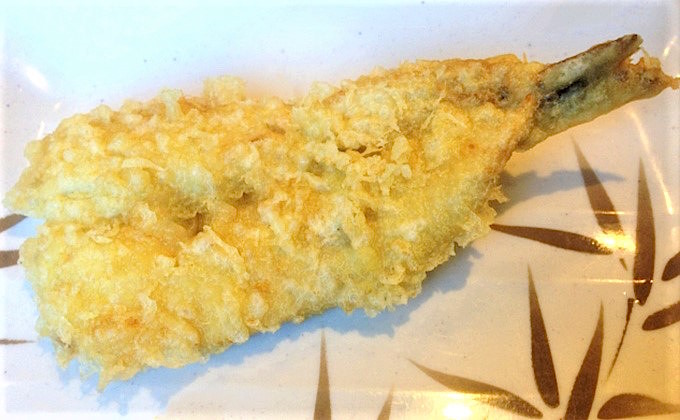 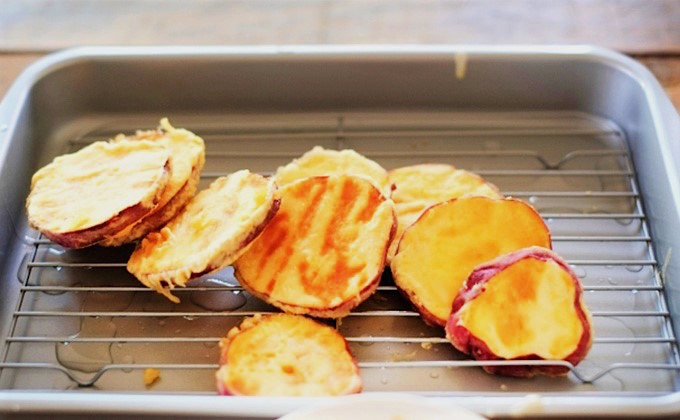 Slow deep-frying brings out a sweeter taste. The outer layer of batter is crispy while the inside is pleasantly floury. 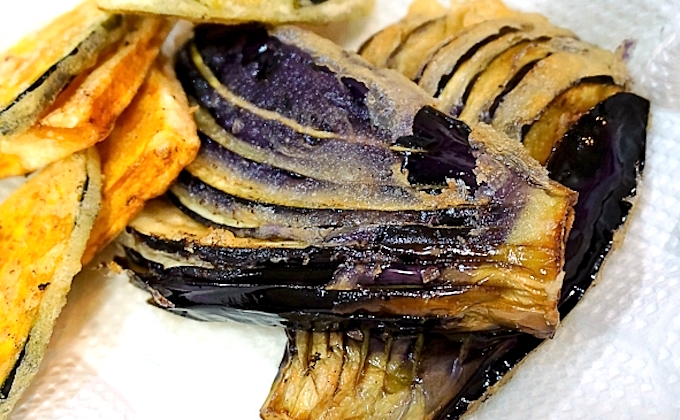 One bite releases succulent juice. Eggplant tempura is delicious as a topping for udon (wheat noodles) or soba (buckwheat noodles). Eggplants may be sliced various ways, such as round slices, half chunks, and fan shapes, among others, before being battered and deep-fried. 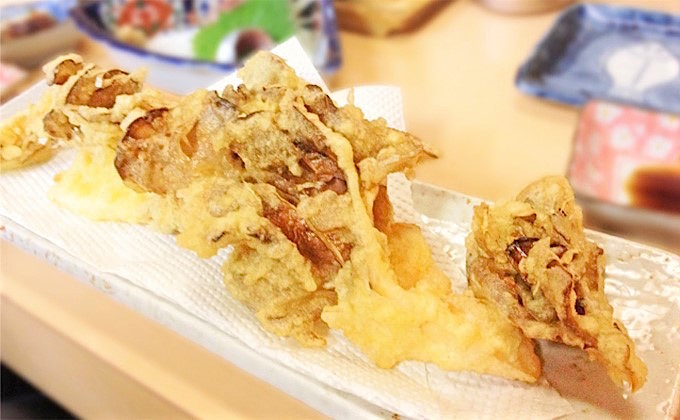 Mushrooms, including shiitake and maitake, are a popular tempura ingredient. Shiitake are sometimes stuffed with minced meat or ground shrimp. 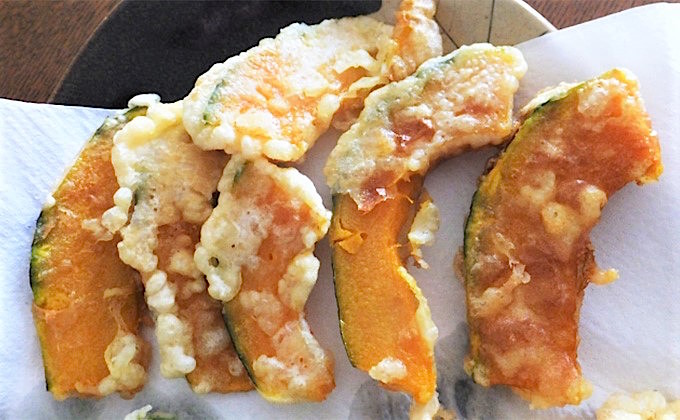 Pumpkin is thinly sliced with the dark green skin left on. Tempura and simmered pumpkin are the most common ways to eat pumpkin in Japan. 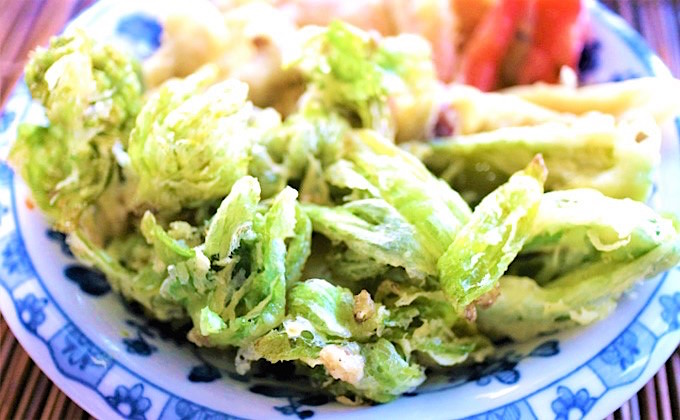 In Japan, the edible plants that grow wild in the fields or mountains are called sansai. They mark the advent of spring and are only available for a short time. Their unique bitterness is lessened when deep-fried as tempura and they become easier to eat. The most common sansai are fuki-no-to (butterbur sprouts), tara-no-me (young offshoots of a tara tree), warabi (fern shoots), udo (offshoots of an udo tree), and take-no-ko (bamboo shoots). 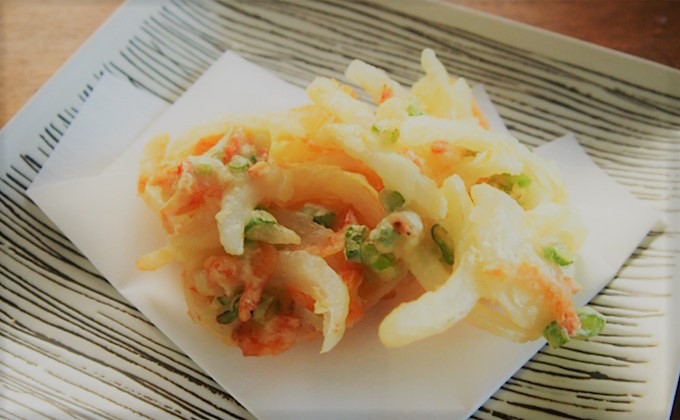 Kakiage is made from kobashira (surf clams), mitsuba (honewort) and other seasonal or preferred ingredients, mixed in tempura batter and deep-fried. 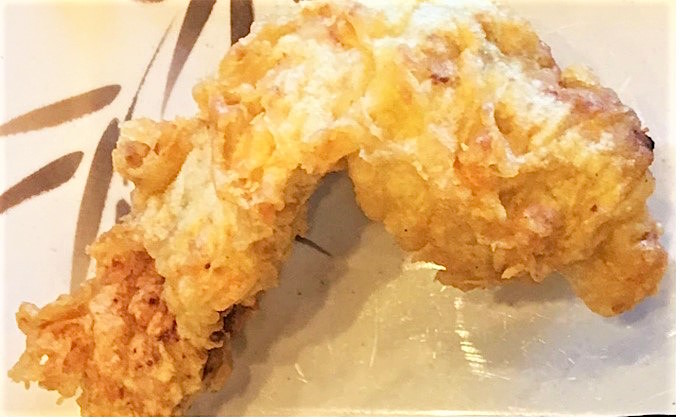 Toriten is chicken tempura, a local specialty in Oita Prefecture. When eating, it is dipped in ten tsuyu (dashi based dipping sauce for tempura) or ponzu (citrus soy sauce). 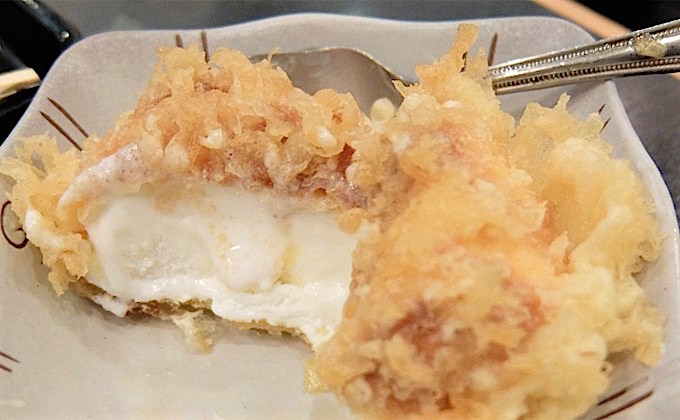 Ice cream tempura is an unusual tempura dessert, made out of ice cream wrapped entirely in castella cake, sponge cake or sliced bread, then battered and deep-fried. It is a taste of wonder: hot outside, but cold inside. 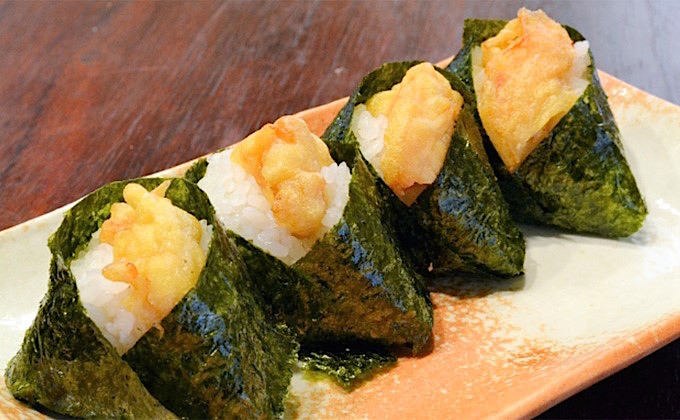 Tenmusu is a variety of onigiri (rice balls), topped with tempura made from the small shrimps of Isewan Bay seasoned with salt, or sweet and salty dashi sauce. This is a local specialty in Aichi Prefecture.

Shiso usually plays a supporting role as a condiment, but when turned into tempura, it can become a crispy and tasty main dish. The pleasant flavor of shiso removes the odor of fish or meat, so it combines nicely with chicken, pork, chikuwa (bamboo-shaped fish cake), hanpen (light white fish cake), seaweed, and others, when cooked as tempura