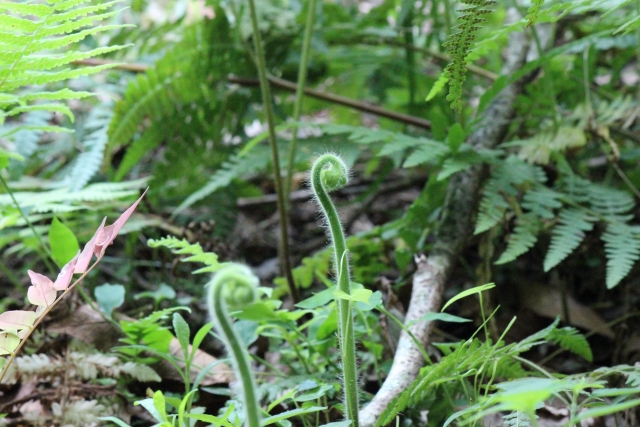 Sansai are wild, edible plants which grow in the fields or mountains. Leaves, stalks, roots, fruits and flowers can also be eaten, but collecting and consuming the sprouts and young grasses from March through June is the main component of sansai eating culture. When sansai sprouts can be found in the countryside, and when a variety of sansai begin to appear in the shops of urban areas, we feel the arrival of spring. 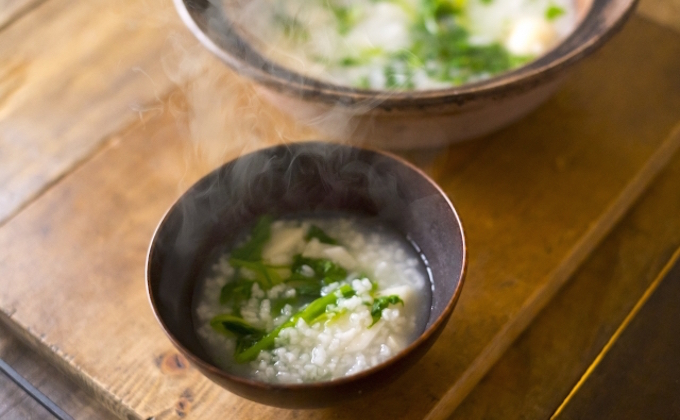 During ancient times, people visited mountains to pick just-sprouted grass in early spring, and there was a practice of wishing for good health by eating it and taking in its strong life force and nutrition. In the Heian Period, nobles enjoyed picnicking and picking sprouts in the fields on the first Day of the Rat of the New Year (on the old calendar), and those scenes were depicted in poems. There is still a tradition of eating rice porridge made using seven different young grasses (nanakusa gayu) during the New Year holiday.

Until recently, sansai were one of the essential foods in mountainous areas where little land is suitable for agriculture. Sansai were consumed as is, as well as, preserved by drying or salting, and provided valuable nutrition during winter, when fresh vegetables were limited in quantity.

Nowadays, with growing interest in slow food and a healthy diet, the simple, slightly bitter flavors of sansai, and the sense of a new season they provide, are gaining popularity in urban areas, and sansai are becoming more highly valued. As such, a wider variety of sansai are sold at supermarkets and greengrocers making them more available than before.

Furthermore, the number of sansai seekers has been increasing and many people enjoy sansai picking today.

Sansai have become a tourist attraction of rural, mountainous areas, and are drawing attention as a local specialty. 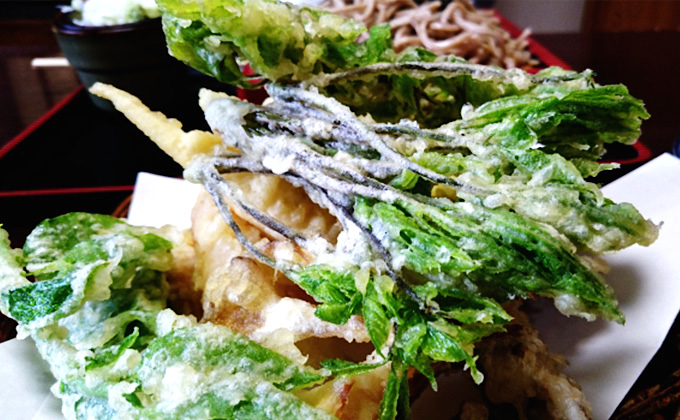 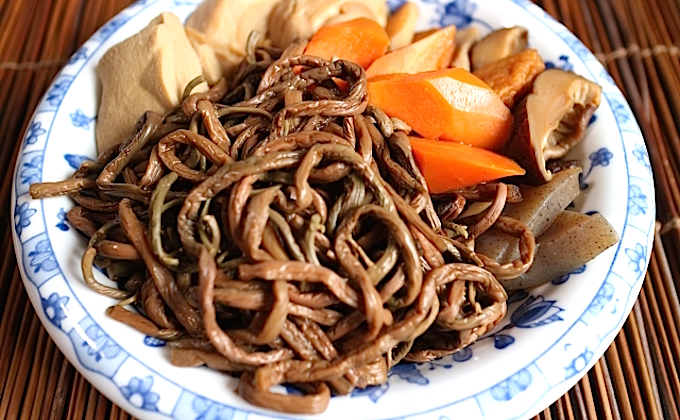 Sansai are a low-calorie food with abundant dietary fibers.

It was also discovered that sansai are high in vitamins and minerals, although it depends on the variety. The distinct bitterness and aroma of sansai mainly consist of polyphenols, which contain antioxidant properties. The bitterness is also said to help gastrointestinal activities and to reduce mental stress. However, these compounds are also why it is necessary to remove the bitterness, and, for some sansai varieties, the toxins, too.

Boiling sansai to remove bitterness can reduce the levels of water-soluble vitamins, minerals, polyphenols, and other nutrition. Therefore, do not boil them for too long and avoid soaking in water for a long time, as that may destroy the texture, appearance and flavor.

Some sansai such as fuki (butterbur), warabi (bracken), and zenmai (Japanese royal fern), however, need careful preparation to remove their harmful properties, by using baking soda for instance.

Fresh sansai are a treat that can only be enjoyed in spring.

The bitter tastes and unique scents might not suit everyone, but they become milder when cooked in spaghetti or made into stir-fried dishes. Please indulge in the flavor of these spring riches, which are only available for a short time. 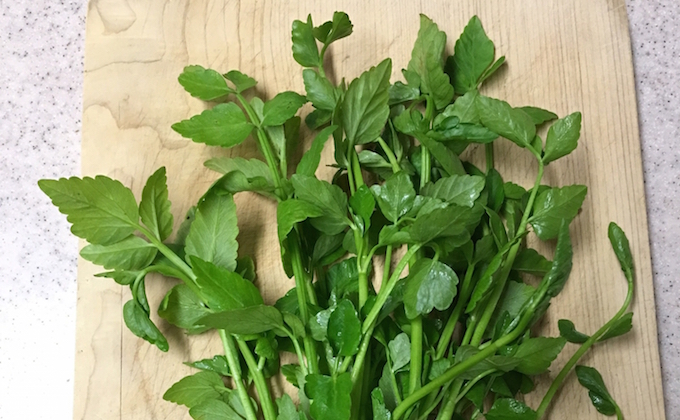 Seri is one of the seven spring grasses that are used to make nanakusa gayu (seven grass rice soup). Seri tastes good when it is boiled and seasoned Japanese-style (with dried bonito flakes and soy sauce) or cooked as kakiage (tempura made with mixed ingredients). 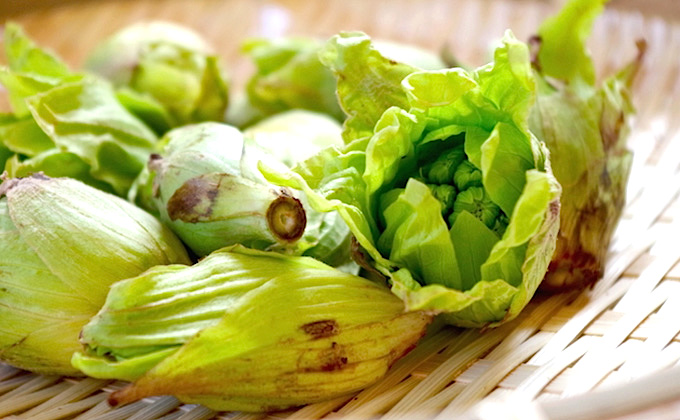 A sansai that marks the start of the harvesting season, fukinoto appears in very early spring, often pushing through the snow. Its distinctive aroma and bitter flavor becomes milder when it is prepared as tempura. Apart from that, it is typically chopped and mixed with miso to eat with rice, or cooked into a dressed dish. When making fukinoto into a seasoned salad, steps must first be taken to remove its bitterness. 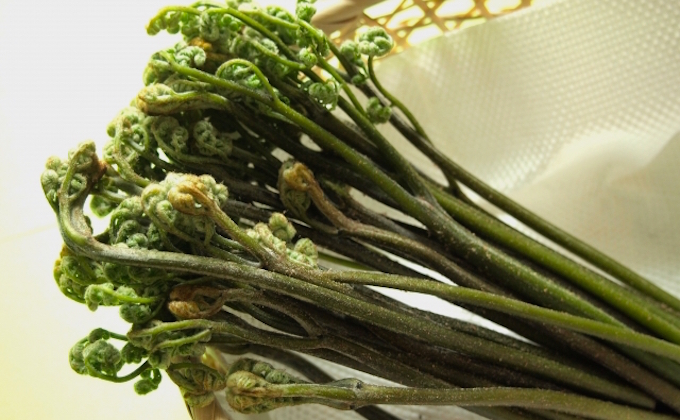 When choosing warabi, look for ones with short, thick stalks, because they are tender and taste the best. These should be harvested before the tip turns upward, for the tastiest results. Warabi needs thorough preparation to remove the toxins, requiring both the use of baking soda and steeping it in water overnight. It is a delicious, versatile sansai that can be made into a variety of dishes, from sansai gohan (seasoned rice with sansai) to tempura and spaghetti. Warabi harvested in the spring can be preserved for a long time if it is salted (you do not need the above mentioned preparation before salting warabi). Salt-preserved warabi can be eaten without boiling it to remove the toxic substances. 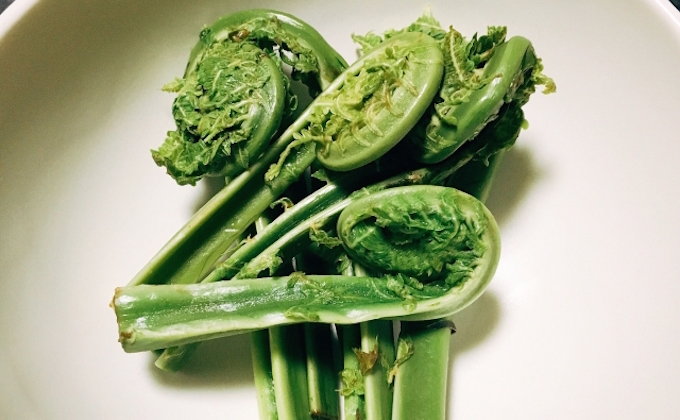 Kogomi contains little bitterness and few toxins, so if it is fresh out of the ground, it can be eaten raw. Kogomi is typically enjoyed as tempura. 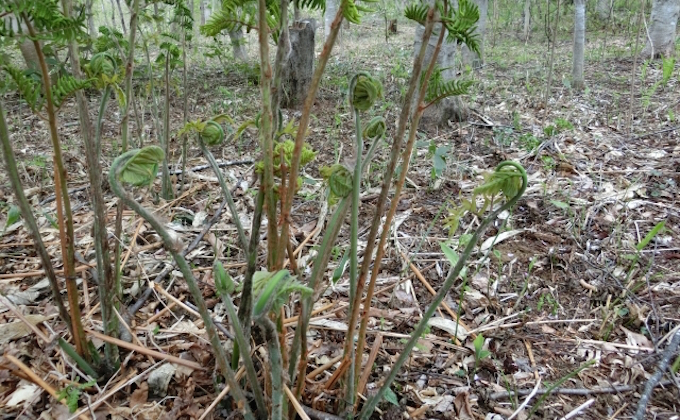 Best picked when it is still a young shoot, zenmai is usually made into miso soup, tempura, dressed dishes and others after bitterness is removed. 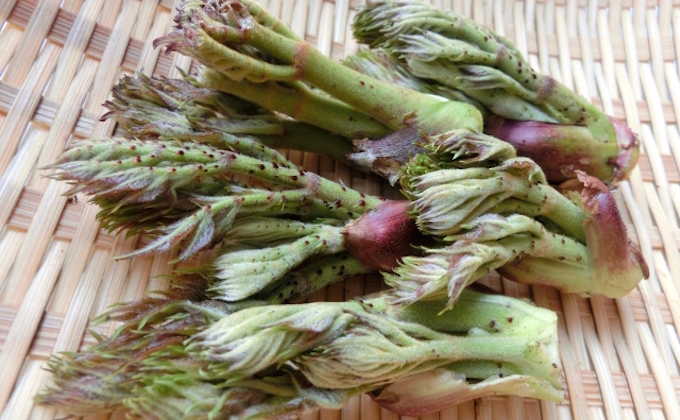 These young sprouts of an angelica tree are usually made into tempura and dressed dishes. 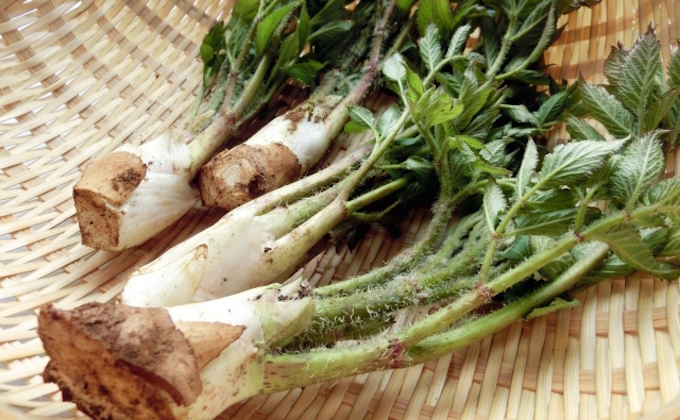 Udo can be eaten raw after being peeled and thinly sliced. Blanched udo is served as dressed dishes. It also tastes great as tempura. Young stalks have a distinctive scent and bitterness, which is loved by more than a few people. 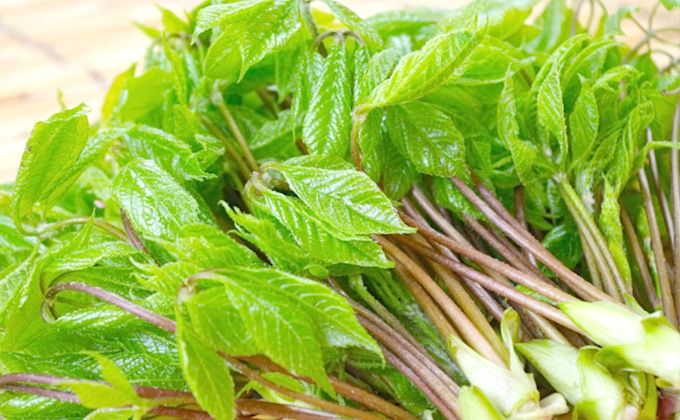 It is said that koshiabura tastes best as tempura. 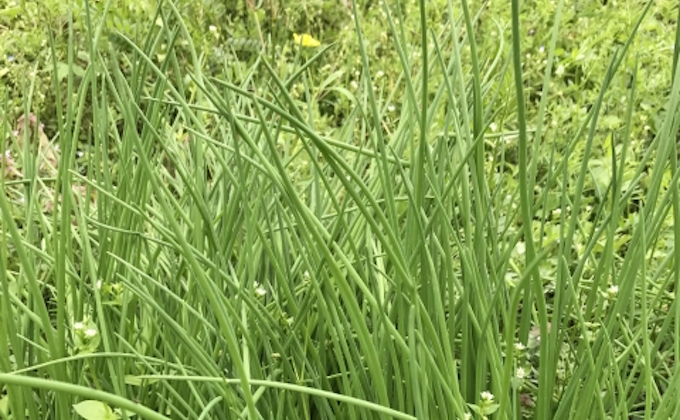 Nobiru is typically made into seasoned salads or dressed dishes after being boiled. 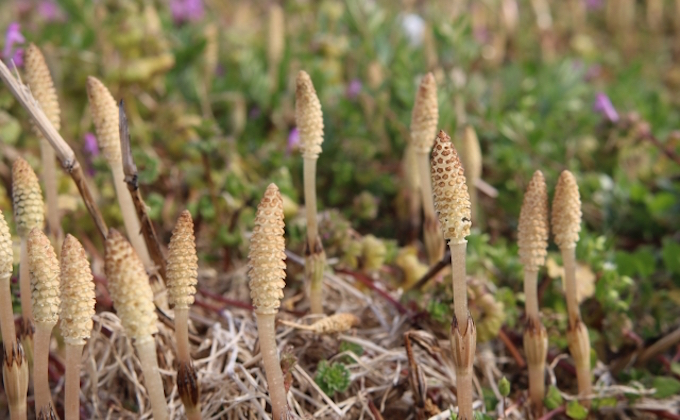 After leaf sheaths are removed, stalks are boiled and soaked in water before cooking. They are then made into miso soup or mixed with a sesame sauce, and also taste delicious when simmered in dashi stock with beaten eggs. 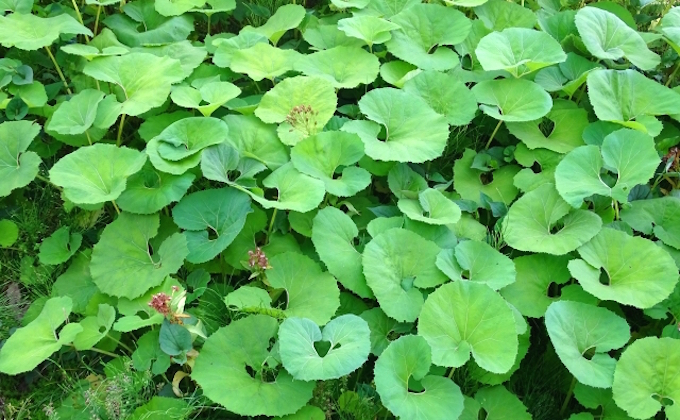 Leaves should be removed and only the stalks eaten. Fuki is boiled in plenty of hot water, then soaked in more water and peeled before being cooked. Fuki is usually simmered in dashi stock, or in soy sauce and mirin to make a dish called tsukudani. When it is peeled and salted in bulks, it can be preserved for a long time. When eating salted fuki, place it in water to remove the salt before cooking. 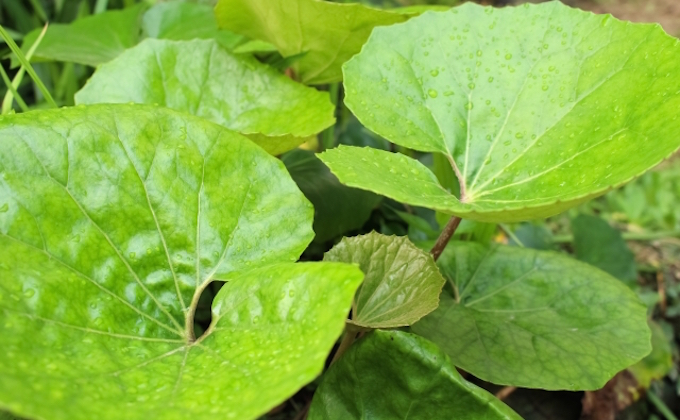 Similar in appearance to fuki, tsuwabuki has thicker leaves with a shiny sheen on them, and is also hairy on its stems and leaves. Tsuwabuki requires preparation to reduce its bitterness and is typically made into stir-fried dishes or tsukudani. 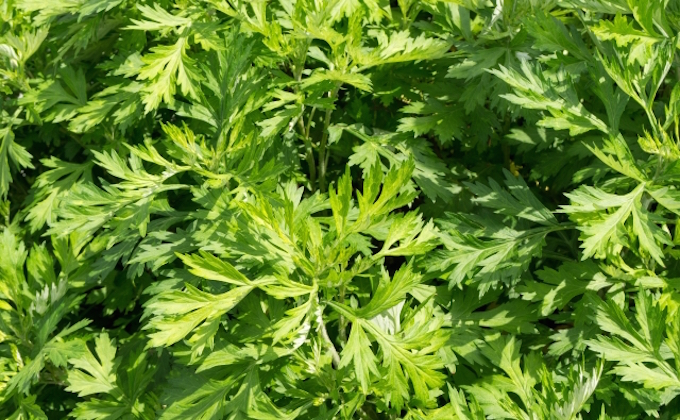 Fresh yomogi tastes great when it is made into tempura after being rinsed well. It is also used to make kusamochi (green mochi with a red bean paste filling). 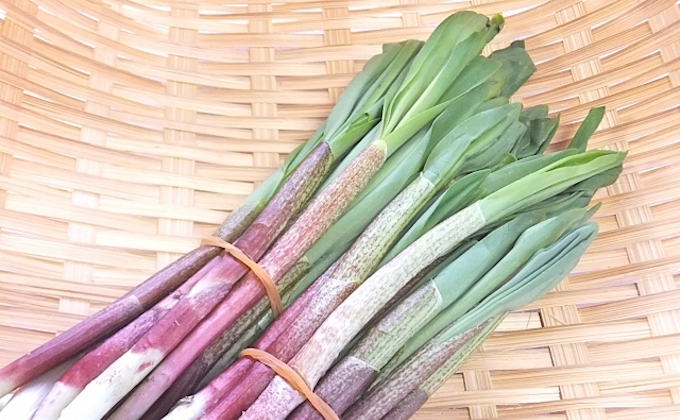 Gyoja ninniku is usually pickled in soy sauce or stir-fried. The name of the plant, “gyoja ninniku,” is derived from the gyoja-ninniku eating habit of ascetic monks (gyoja in Japanese) devoted to mountain worship, while training. Gyoja ninniku has a distinctively strong aroma like garlic (ninniku in Japanese). 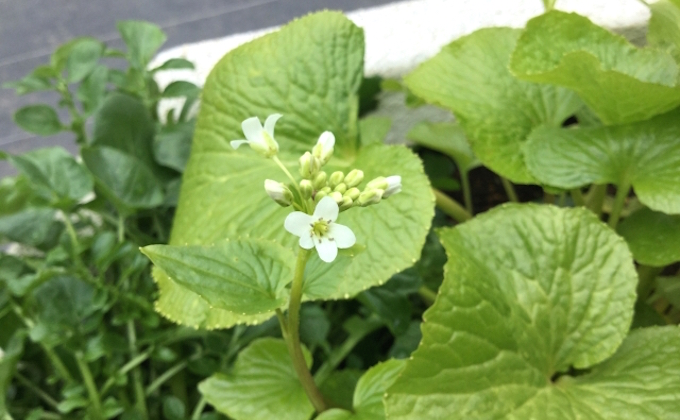 Wasabi leaves and flowers pickled in soy sauce taste scrumptious. They can also be enjoyed as tempura.

Yabukanzo is usually parboiled and soaked in water before being cooked. It has a slight sliminess, and tastes good when mixed with vinegared miso (bean paste), is simmered, stir-fried, or made into tempura.

Amadokoro is a rare wild plant which cannot be foraged in mass. It needs boiling to remove the exceptionally unpleasant bitterness, but fresh amadokoro made into tempura tastes delicious. 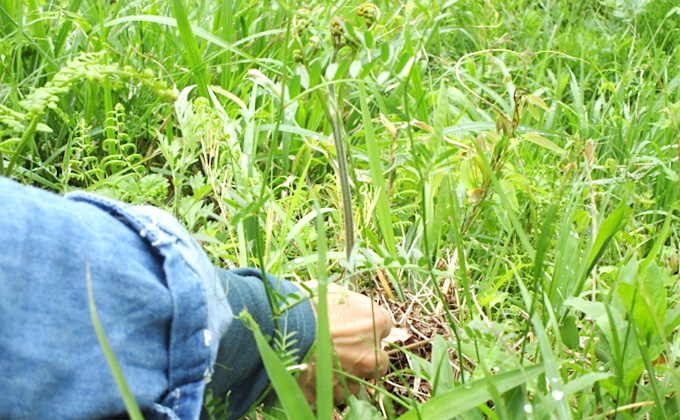 Please harvest sansai in designated areas only.
Some sansai look very similar in appearance to poisonous plants, so if you go sansai seeking for the first time, it is strongly advised that you go with an experienced guide who knows edible wild plants very well.
Be careful not to get lost: do not go too deep into the forest while seeking sansai.
In the mountainous areas of the Tohoku region, sansai seekers sometimes encounter wild bears, which are extremely dangerous. When you go sansai foraging, do not go to mountains alone, for your own safety.

・Make sure the areas you are collecting from are approved sansai foraging areas.

・Never harvest the roots, so that the species will be protected. Leave plenty for wild creatures, other foragers, and the plant itself, so it will still be there the following year.

・Gather only what you will eat. Do not take too much.

・Harvest only when you are absolutely 100% sure that the plant is safe to eat.

・Be careful not to damage other wild plants and the environment, and make sure to take your litter home.