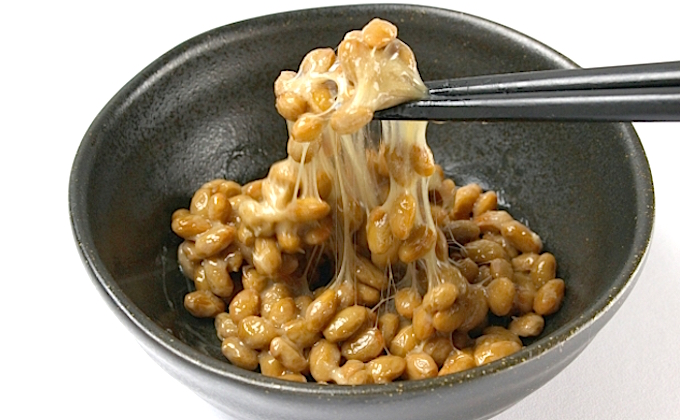 The History of Natto

It is not clear when Japanese people started eating natto, and there are a few theories concerning its origin. One idea is that there was some kind of natto-like food in the Yayoi Period, when the harvest of pulse crops started. During that time, floors were covered with rice straw. The combination of air, dried grass and rice straw contained a heavy population of the bacteria essential in making natto. As natto bacteria needs moisture and warmth, and rice straw provides high moisture and heat retention, this was a desirable place for natto bacteria to reside. The dwellings at that time had a hearth for cooking and warmth, which also contributed to making a fairly good habitat for natto bacteria. People cooked beans there, but since the mud pots in that era were too fragile to cook hard soybeans until soft, people had to first crumble the beans before boiling them. The warm, cooked soybeans often fell, accidentally, onto the floor and into the rice straw matting. There, the beans met natto bacteria and were transformed into sticky natto. When, later, the pungent soybeans were discovered, people decided to try them and were surprised by the delicious taste, so they started making natto on purpose. It is speculated, therefore, that natto originated from this accidental meeting of soybeans and natto bacteria, although there are no documents or evidence to prove this.

Another theory, or legend, is that natto was developed during a war at the end of the Heian Period. A general, dispatched to the Tohoku Region (northern part of Japan), had to barricade himself and his soldiers in a mountain fortress. The war dragged on, however, and feed for the horses fell short, so the general ordered local farmers to provide them with soybeans. Farmers were so hurried that they could not find any decent containers in which to pack cooked soybeans, so they stuffed the still-warm beans into a tawara (rice-straw sack). A few days later the soybeans produced a unique aroma and developed a sticky coating. The general and his soldiers, taken aback, tried a bite of the soybeans anyway, and found that they were good enough to be provisions for the soldiers. This new food became known to farmers, too, and they started making natto. Those fermented soybeans may be the ancestors of the natto of today.

Records from the Muromachi Period list natto and daikon as foods served at annual events. Natto also appears as a character in a book written during this time. These indicate that natto was eaten over a fairly wide area. In the Edo Period, natto became popular among common people, although it was not consumed throughout the year, only in winter. However, around the middle of the Edo Period, it was eaten year-round in major cities such as Edo. At that time, zaru natto, which was soybeans fermented overnight in a chamber, on top of a bamboo basket (zaru) covered with rice straw, was commonly consumed. It was sold by weight; each person’s order measured and scooped out with a masu, a small wooden box. The combination of natto, rice and miso soup was a typical breakfast menu for townspeople, and they ate natto with soy sauce or put natto in miso soup. In the Meiji Period, zaru natto went out of fashion, and a more sanitary version called tsuto natto (natto wrapped in rice straw) became popular. In 1905, natto bacteria was successfully isolated and purely cultured. Later, the first step in making natto by adding bacteria directly to soybeans (instead of the traditional method of wrapping soybeans in rice straw) was taken.  Then, in 1919, a modernized method of making natto in a paper box instead of rice straw was perfected, by adding natto bacteria to soybeans at a fixed room temperature. In the 1950’s, after WWII, supermarket companies spread their chains nationwide, and a new container made of polystyrene paper (a kind of Styrofoam) came into use. Also around that time, sachets of a soy-based sauce and a spicy mustard began to be included in the package. 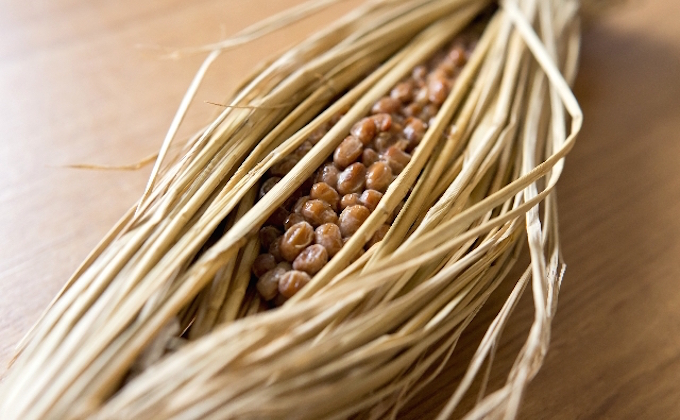 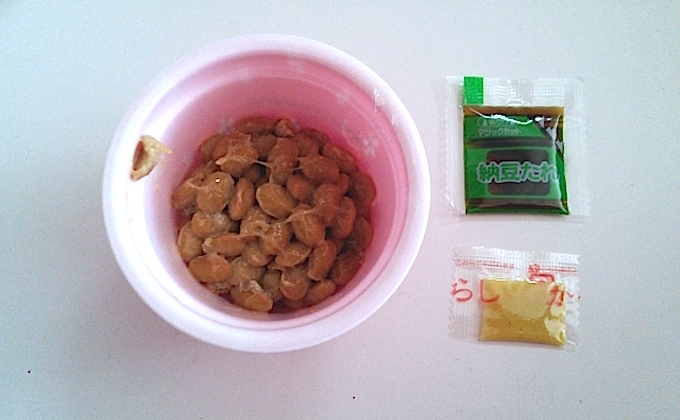 Natto with sachets of sauce and spicy mustard 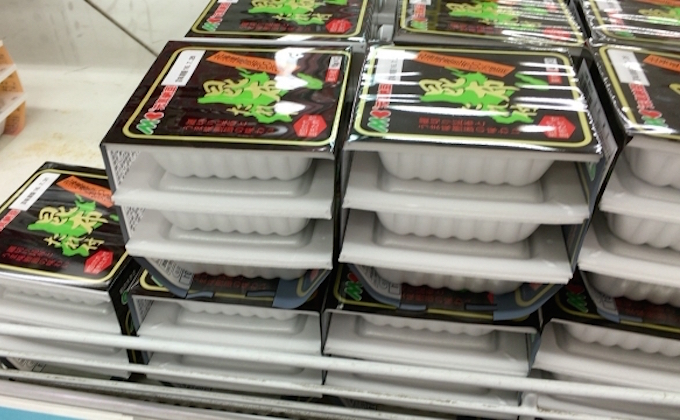 Natto is a common dish in the Japanese diet, especially at breakfast. It is a food unique to Japan, made by fermenting cooked soybeans with natto bacteria. It has a distinctive aroma.

<Natto bacteria enhances the nutrition found in soybeans. >
Soybeans are naturally very difficult to digest because their coating is extremely hard.

Fermentation through natto bacteria, however, can make up for this drawback. When fermented, the inherent nutrition of soybeans, including protein, carbon and fat, remain the same, but the soybeans are transformed into the more digestible form of natto, with its distinctive aroma. Natto is a health food with the following benefits:

・Prevents blood clotting
The nattokinase, contained in the sticky strings of natto, are effective in dissolving blood clots, and, therefore, help to reduce the risk of cerebral infarction, ischemic heart disease, and dementia in old age, among others.

・Prevents osteoporosis
Natto contains not only nattokinase, which discourages unnecessary blood clotting, but also vitamin K2, which promotes normal blood clotting. More Vitamin K2 is found in natto than in various other foods, and this constituent helps increase bone density.
Natto is rich in calcium, too, which helps to build strong bones and teeth.

・Aids in weight loss
Natto is a great source of insoluble dietary fiber. This fiber swells naturally, by absorbing water and other liquids, so it helps curb your appetite.
Also, since nutrient components called saponins slow down the absorption of nutrients in the intestines, natto is fairly filling. Soy peptides present in natto also raise basal metabolism. All in all, natto is an ideal food for losing weight.

・Lowers cholesterol
The nattokinase contained in natto works as a blood thinner.
By thinning the blood, blood pressure can be kept at an ordinary level and LDL (low-density lipoprotein) cholesterol can be lowered.
Natto contains not only nattokinase but also soy protein, which also helps decrease cholesterol levels.

・Beautifies skin and hair
Vitamins E and BS beautify skin, and asparagine and polyglutamine help skin and hair hold on to water.

・Prevents diseases peculiar to women
Drops in the levels of female hormones can cause diseases such as osteoporosis, breast cancer and climacteric disorder. Soy isoflavones have a similar function to female hormones, so they help prevent these diseases. 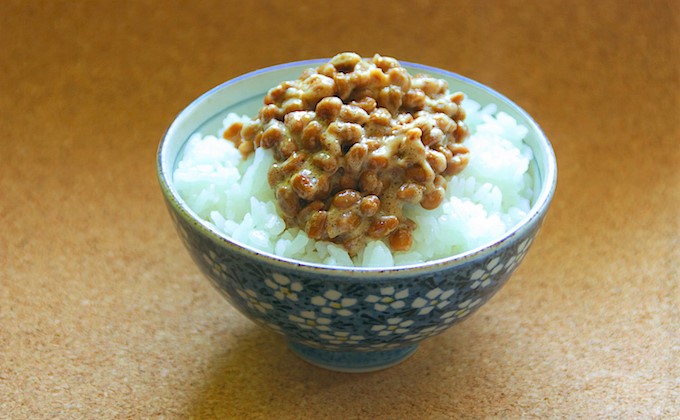 Natto over rice is a typical breakfast menu for many households.
There are various flavors of sauce that come with store-bought natto, such as egg and soy sauce, soy sauce with grated daikon radish, soy sauce with bonito stock, soy sauce flavored with shiso Japanese herb, and so on, depending on the maker.
Ways of eating natto vary according to the desire of the consumer. Some people mix natto with chopped spring onions, cheese, takuan Japanese daikon pickles, and other things. 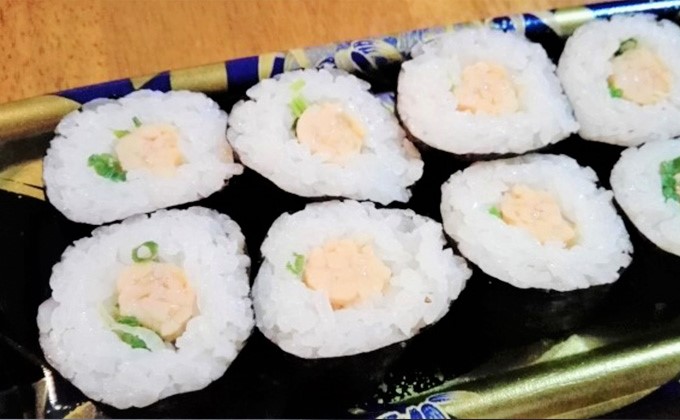 Natto-maki is a sushi roll made by wrapping up natto in vinegared rice and seaweed. It is a very typical type of roll and popular among all ages. 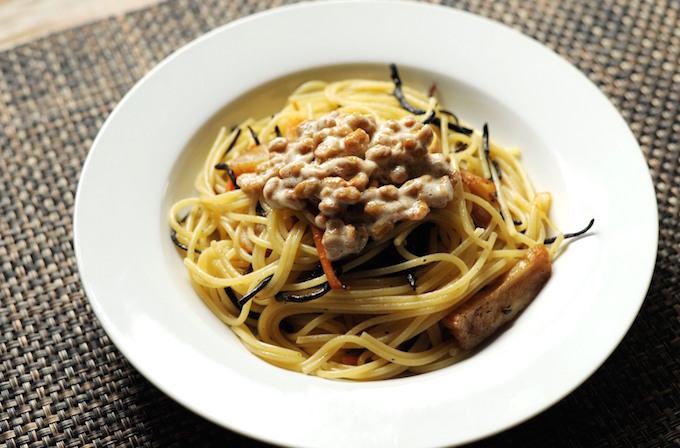 Natto pasta is a fusion cuisine of Western “pasta” and Japanese “natto”. All ingredients are inexpensive, making it an easy meal to make without breaking the bank.

Natto jiru is miso soup with natto. The ingredients can include up to four types of soy bean products: natto, tofu bean curd, miso bean paste and fried tofu, so it is, potentially, a great source of nutrition. Natto jiru is a local specialty in Yamagata Prefecture.

Natto fried rice is a collaboration of Chinese “fried rice” and Japanese “natto”. When stir-fried, natto becomes more savory, making it possible to enjoy it from a different angle.

Natto tempura is a good side dish for rice, and also goes well with alcoholic drinks. By deep-frying frozen natto, the pieces of natto do not separate and can be cooked beautifully.

Natto omelet is a filling dish, which is an omelet with natto in it. Sometimes natto is put on top of an egg while it is being cooked.