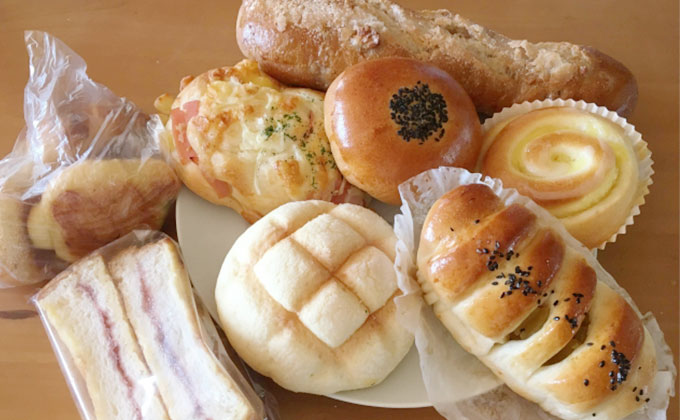 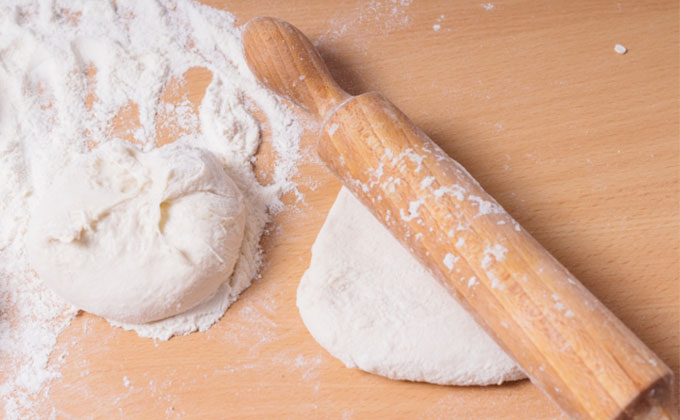 During the lockdown, many people have taken up new hobbies to make their time at home as productive as possible. Many tried baking bread and sharing their creations (sometimes disasters!) on SNS. In Japan, too, bread flour and yeast were gone from grocery shelves for a while. Rice or noodles, rather than bread, might come to mind when you think of Japanese food, but according to the Family Income and Expenditure Survey by Ministry of Internal Affairs and Communication、in 2018 the average household in Japan actually spent more on bread than on rice in the past few years: 24,314 JPY on rice [about 225USD] and 30,554 JPY on bread [283USD]).

How Bread Came to Japan

Authentic, Western-style bread was reputedly brought to Japan in the middle of the 16th century. It is said that bread (and guns) were introduced by the Portuguese when they became shipwrecked off the coast of Tanegashima Island. As a result, bread is commonly called “pan” in Japan, which is derived from the Old Portuguese word for bread. However, bread was consumed mainly on Christian religious-related occasions at the time and was out of reach for the majority of ordinary people.

In the Edo Period (17th-19th century), Japan closed its doors to all foreign countries except for China, Korea, and The Netherlands. During this time, Christianity was forbidden, along with cultural and economic contact, so bread-making was continued only on Dejima (a small island of the Dutch trading post) in Nagasaki.

When the Opium War occurred in China in 1840, the Tokugawa Shogunate made the Deputy of Izu Nirayama, Egawa Tarozaemon, in charge of guarding Tokyo Bay, because it was feared there would be attacks by the British. Egawa saw bread as a potential provision for soldiers because it was lighter and easier to carry than rice, and most importantly, there was no need to start a cooking fire on the battlefield. Egawa Tarozaemon is the first Japanese on record to bake bread by himself. In 1842, a larger-scale bread baking facility was built and bakers from Nagasaki set up shop. Bread at that time is said to be similar to today’s hardtack.

After the opening of the country to the world in 1858, bakeries run by immigrants opened in foreign settlements in Yokohama, and bread was baked for newcomers and the military. Starting at the end of the Edo Period, the shogunate received support from France for military training in Western warfare, so hotels that had many guests from France began to bake crusty French loaves. After the shogunate ended, the Meiji Government received support from Britain to develop a modern navy, which led bakers at hotels to begin baking British-style round top bread. Many Japanese people worked under foreigners in hotels and restaurants in these settlements. They observed how to bake bread and cook Western cuisine, and then brought their skills to other parts of Japan. Ordinary people, however, could not afford to eat at the Western-style restaurants and only a portion of the upper classes, along with those involved in international trade, enjoyed dining there.

In 1869, Kimuraya Sohonten, one of the oldest bakeries still in existence in Japan, opened. The founder invented anpan (bread with a sweet red bean paste filling) using rice koji mold, which is originally used to brew sake. The sweet bread was garnished with a pickled cherry blossom and enjoyed huge success. It was even presented to the Meiji Emperor on April 4th, 1875 (a day that is now Anpan Day!). After that, its reputation spread and sweet breads such as anpan, jam pan (bread with a jam filling) and cream pan (bread with a custard filling) took root in ordinary people’s lives.

It was not until after World War II that Japanese people began eating bread as a staple, not just as a snack. During the time when food was scarce, relief supplies that included flour were sent to Japan by foreign countries, like the US, and bread was rationed. In 1946, bread and milk were served for school lunch. Having eaten bread in childhood, more and more people began to eat bread for a meal. As the 1964 Tokyo Olympics accelerated the westernization of the Japanese diet and lifestyle, European breads such as French baguettes and croissants, and Danish pastries, were introduced to Japan. In the 1980s, the number of convenience stores shot up and a variety of bread, most of which were modified for Japanese palates, became available. 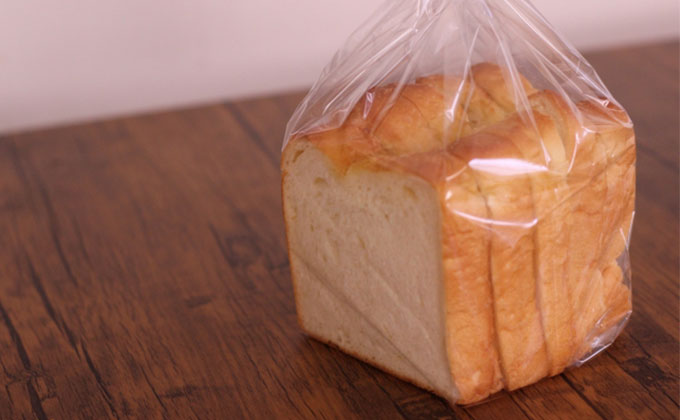 Shokupan is a cubic loaf of soft white bread. A loaf is usually called “1-kin (ikkin),” and often measures 12.5cm on either side. Slice thickness varies with the number of slices, starting with the very thin sandwich slice, and steadily increasing with 8 slices, 6 slices, 5 slices and 4 slices. In general, people in the Kansai area like thicker ones better, so 5-slice loaves are common, whereas in the Kanto area, the 6-slice is popular. Overall, Japanese shokupan slices are usually thicker than those in Britain, hardly able to fit in a toast rack! 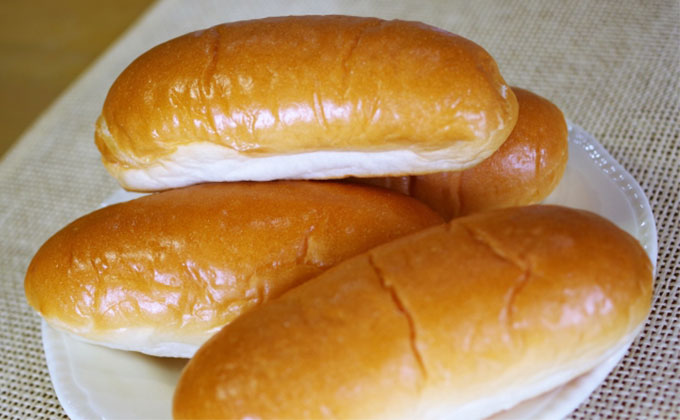 Koppe-pan looks like a hot dog bun and has a soft texture. Japanese school lunches serve a slice of shokupan or a koppe-pan once a week or more, depending on the region. Age-pan is usually a piece of deep-fried koppe-pan coated with sugar, and sometimes, kinako (soybean powder). 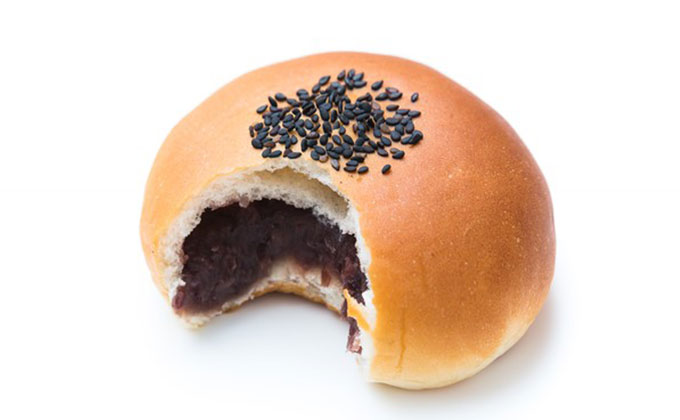 Anpan is bread with a sweet red bean paste. Anpan comes with either coarse tsubu-an (beans remain partially intact), or mashed fine koshi-an (a smooth texture), and most people are strict fans of one or the other, sometimes resulting in a battle. There are other varieties, too, such as sweet white or green bean paste. 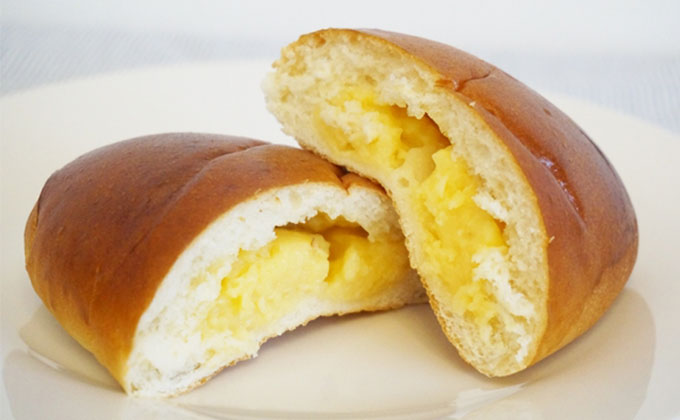 Creampan is bread with a custard filling. Inspired by the delicious cream puff, the founder of Shinjuku Nakamuraya (a restaurant and confectionary shop originally founded as a bakery) wanted to make bread using the same sweet cream, and so he invented creampan. 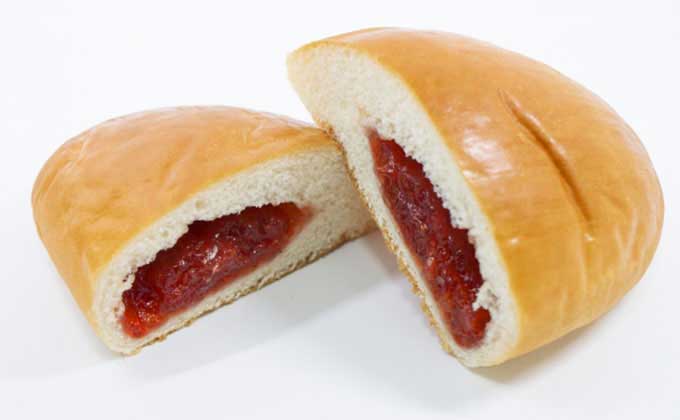 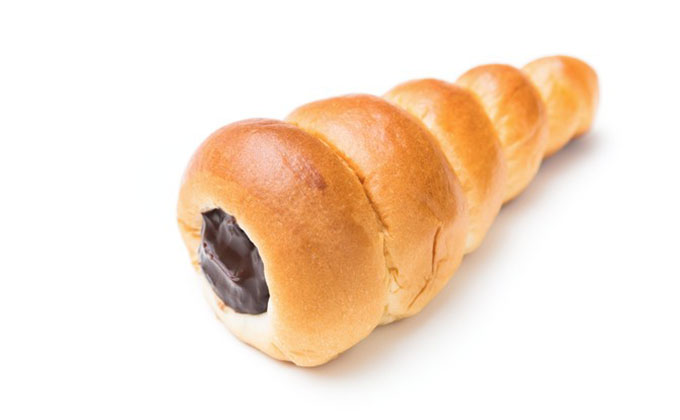 Choko korone is hollow bread shaped like a spiral shell, with chocolate cream squeezed into the middle. The origin of the word “korone” can be traced to either a French word “corne” (horn) or an English word “cornet,” both of which describe the bread’s appearance. There are variations of fillings: pastry cream, whipped cream, peanut cream, etc. 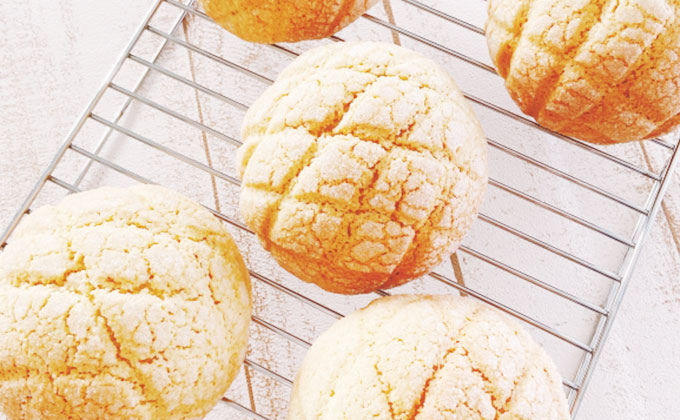 Melon pan is bread that has sweet biscuit dough on top with a surface scored into a crisscross pattern. It does not actually contain any melon juice or flavor. Then why is it called melon pan? There are a few different theories for the origin of this name. Some say it looks like a melon. Others say that melon essence used to be added as an ingredient. Melon pan comes in a round shape or an American football shape. It is sometimes called San Raizu (sun rise) in the Kansai area.

Bread that Doubles as a Meal

Bread with a side dish 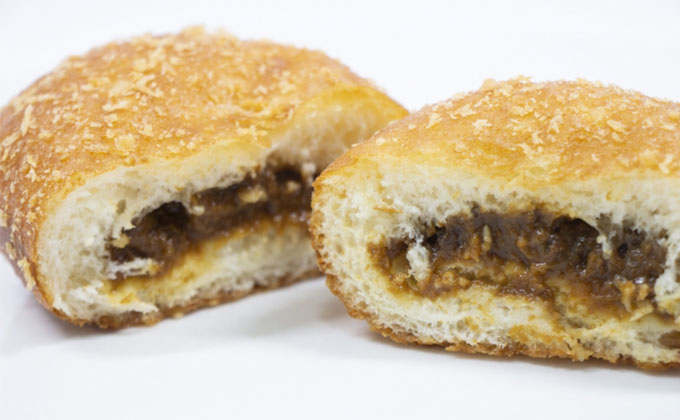 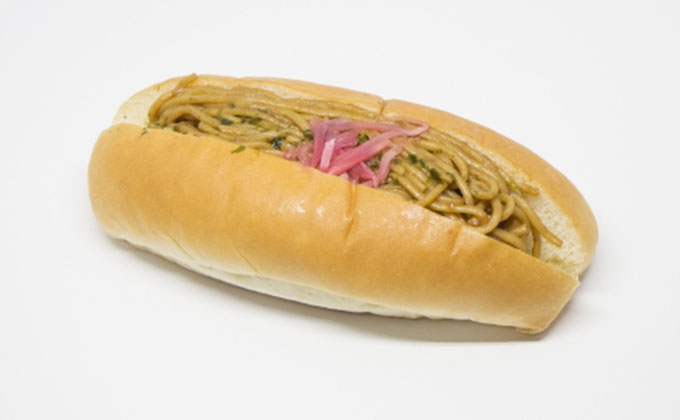 Yakisoba pan is sliced koppe pan stuffed with stir-fried noodles (yakisoba) that have been doused in Worcestershire sauce. It is usually topped with powdered green laver and pickled red ginger like real stir-fried noodles. 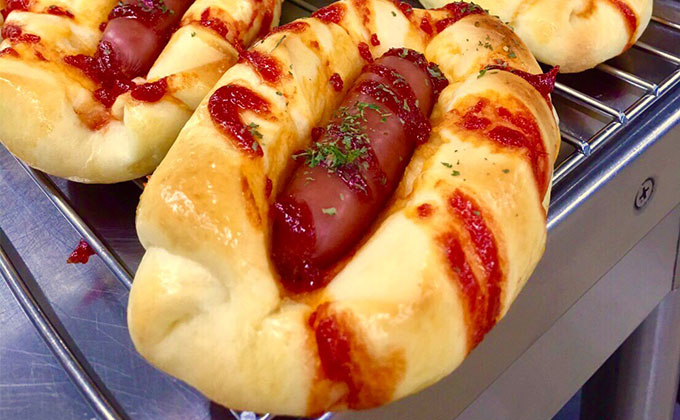 Uinna roru is made by putting a weiner on top of the dough or by rolling dough around one. The bread is usually topped with ketchup, mayonnaise and parsley. 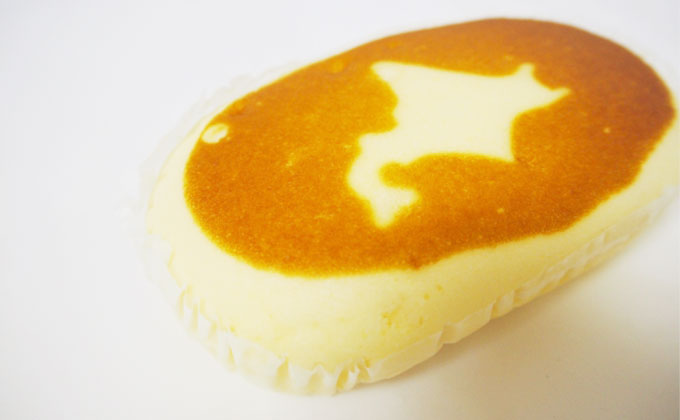 Chizu Mushipan, steamed cheese bread, went on sale in 1990. Its soft, moist texture and rich cheese flavor caused a huge sensation. Not a short-lived craze, cheese bread is still loved by many. 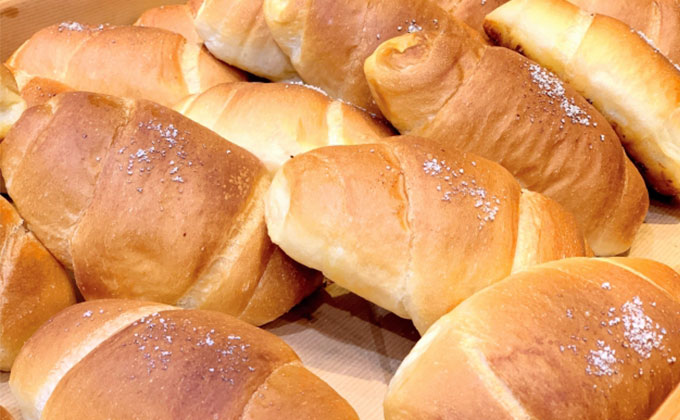 Shio Bata Pan is baked with a butter filling inside and topped with salt. It was first sold in a bakery in Ehime Prefecture, with the goal of creating bread that can replenish sodium during the sweltering summers. It achieved widespread popularity and has become a standard.

Often found in convenience stores or supermarkets, Kanipan is bread shaped like a crab as the name suggests. A longtime seller since 1974, Kanipan has an extensive shelf life (45 days) and is particularly popular among children. 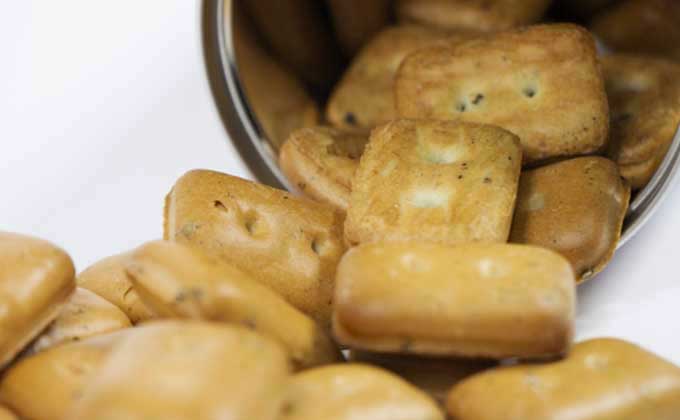 Similar in name to kanipan, kanpan is a modern version of hardtack that can be enjoyed as a cracker-like snack and as a ration in times of emergencies. Thanks to its extensive shelf life (five years), it can be kept with disaster supplies until needed.

In a government sponsored effort to help the rice farmers, many lunch centers have begun serving bread that is made with rice flour (komeko pan) or cooked rice mixed with wheat flour (gohan pan) two or three times a month. Its chewy texture is extremely popular, and for those with gluten allergies, the gluten-free aspect of bread, pasta and sweets made with rice flour is a huge bonus. Using rice flour in place of wheat flour caused some problems at first, but thanks to extensive research, trial and error, many bakers (both amateur and professional) are enjoying success. Japanese farmers are happy, too.

Now, there are even bread-making machines that come with various recipes for making bread with either rice flour, a blend of rice and wheat flour, or bread with cooked rice and wheat flour. At least twice a week, I make gohan-pan for my family and the recipe is very easy: 150 grams of cooked rice, 180 ml of hot water, 250 grams of flour (the kind with the kanji for “strong” 強 on the package), three tablespoons of sugar, a tablespoon and a half of milk, a teaspoon of salt, 10 grams of butter, and a teaspoon of dry yeast. After mixing all of the ingredients except for the yeast, I let it sit for 20-30 minutes, so that the hot water and hot rice don’t kill the yeast. Then, I add the yeast and just push Menu 9 Start. Four and a half hours later, we get a steamy, chewy loaf of bread! Its texture remains moist and chewy for at least three days, if it doesn’t get gobbled up before that, and its’s a great way to use up any leftover rice.

・Rice: the Essence of Japan
・Japanese and American School Lunch: Contents and Culture