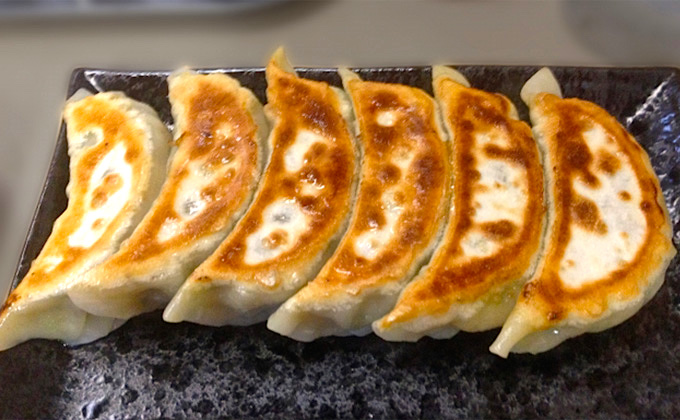 The History of Gyoza

For Japanese people, gyoza dumplings are strongly associated with Chinese cuisine, but similar food can also be found in other countries. Evidence of food made by wrapping fillings with flour dough has been discovered in the ruins of ancient Mesopotamia. This indicates that gyoza dumplings were brought to India and China via the Silk Road.

There are several theories surrounding the mystery of how gyoza dumplings were introduced to Japan. A gyoza-like food first appears in written documents in the early 18th century. According to the document, a type of dumpling was offered to Mitsukuni Tokugawa by a Confucianist from the Ming Dynasty of China. Gyoza appeared in Chinese restaurants and in cookbooks by the time of the Meiji Period (1868-1912), but remained an unfamiliar food for common people.

Gyoza began to be more widely consumed in Japan after World War II. Returnees from China, including military personnel and the Manchuria Development Corps, reproduced the dumplings they had eaten in China, bringing this new food to their homes. As gyoza became more available, the ways to eat and season them were adjusted to suit the Japanese palate and food culture. Grilled gyoza (yaki-gyoza), which eventually became one of Japan’s national foods, have taken root in casual Chinese restaurants, ramen noodle shops, gyoza specialty shops, and in homes as an easy side dish. Some restaurants offered grilled gyoza as take-away. Nowadays, some areas have developed their own gyoza culture and offer original gyoza, made with local, specialty ingredients. 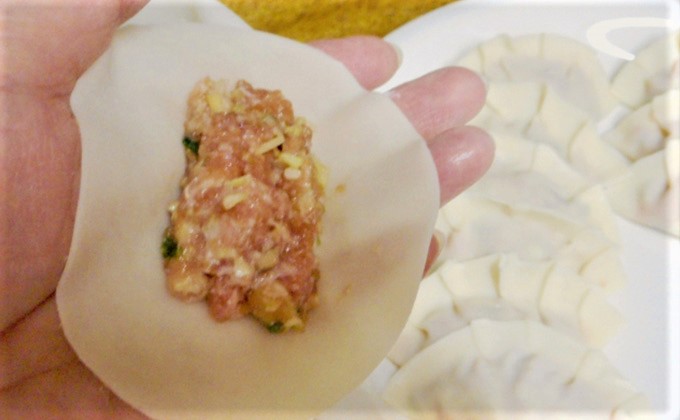 Gyoza are made by wrapping a mixture of meat, prawns and vegetables inside flour dough, and then heating them. There are four ways of cooking gyoza: boiling, grilling, steaming and deep-frying.

In China, gyoza are called jiaozi, or ciaozi in Mandarin. In the north-east area of China (Manchuria), a production area for flour where flour-based food was widely consumed, boiled gyoza made with a thick, flour dough were a staple food. This type of boiled gyoza spread all over and became one of China’s typical dishes. Apart from this, steamed gyoza eaten as a refreshment, were developed in the southern part of China. Generally referred to as “dim sum,” they represent a wide variety of steamed gyoza made with different kinds of dough and in different shapes. 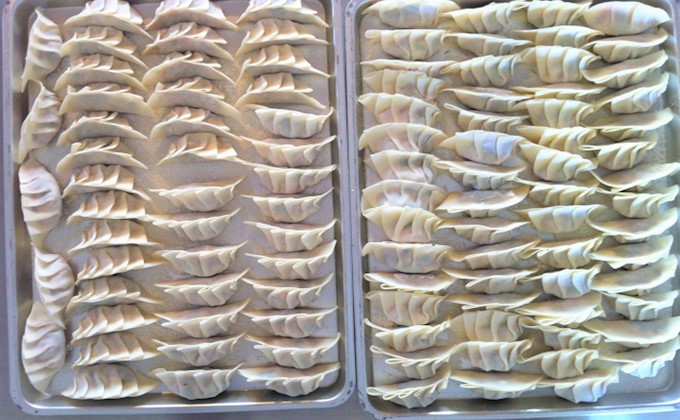 The majority of gyoza are formed into a half-moon shape like a crescent. This shape was derived from the currency of ancient China, and it represents both good fortune and wealth. Gyoza can also be found in a stick, round or bag shape. In Chinese, the pronunciation of jiaozi is the same as the word that means having a baby, so gyoza are regarded as a good luck food and an essential dish for the Chinese New Year or other festive occasions, such as wedding ceremonies. 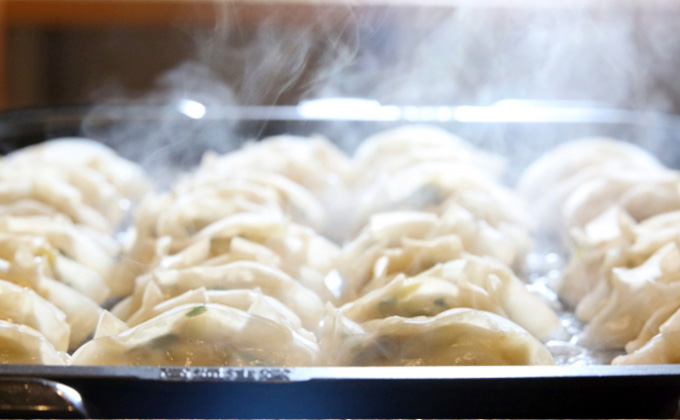 In Japan, gyoza pan-grilled in a frying pan or iron pan are the most typical. Fillings made from vegetables and minced pork are wrapped in a thin dough and grilled crispy. Grilled gyoza, paired with that Japanese staple: rice, have developed in styles unique to Japan. The typical dipping sauce is made from soy sauce, vinegar and chili oil. Garlic is often added to the fillings in Japan but, increasingly, more gyoza are being made without garlic, due to its strong odor. 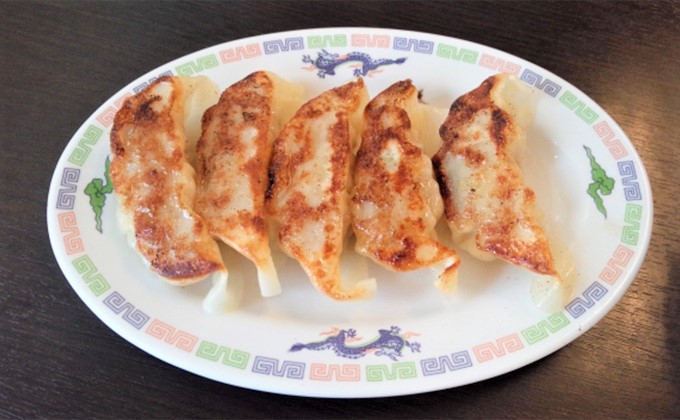 Gyoza in China are grilled after being boiled once, whereas, in Japan, raw gyoza are grilled directly in a pan. This style is better suited to boiled white rice. Fillings made from vegetables and minced pork are wrapped in a thin dough. Gyoza are then steamed and grilled crispy and savory in a pan or iron pot. Yaki-gyoza are the most popular kind of gyoza in Japan. 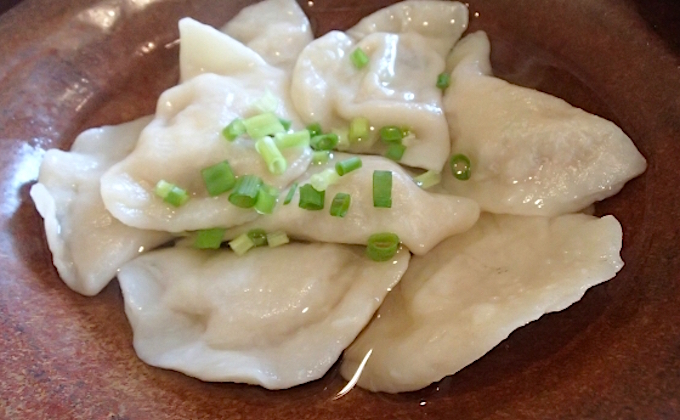 Boiling is the most common way to eat gyoza in China. Gyoza made with a thicker dough than for grilled gyoza are boiled in hot water. In Japanese, suigyoza are also called yudegyoza (literally: boiled gyoza). Suigyoza are cooked without oil, and eaten with a dipping sauce, so you may enjoy the simple flavors of the ingredients. 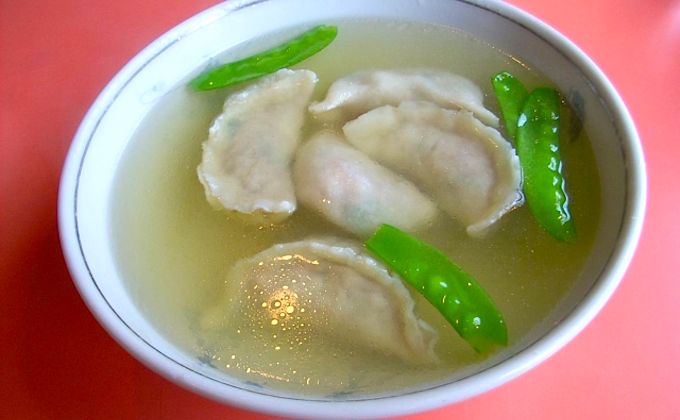 Soup gyoza are boiled gyoza cooked with other ingredients, such as vegetables, in a broth that is then eaten as soup. In Japan, soup gyoza are sometimes called suigyoza (boiled gyoza), too. This soup with gyoza is similar to wonton soup, but unlike the thin skin of wontons, gyoza skins are thick, and, therefore, more filling. 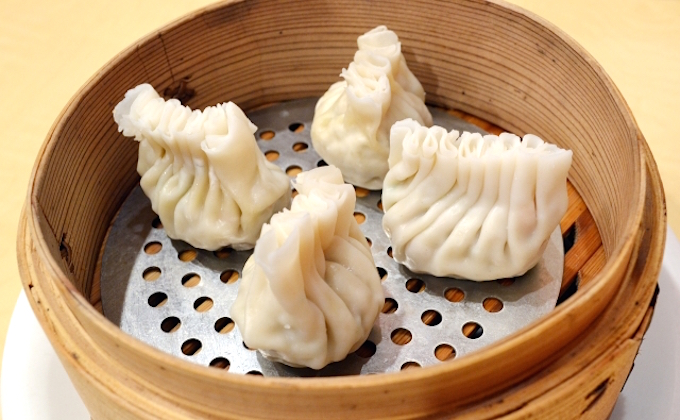 Steaming is the most common way to prepare gyoza for dim sum. Gyoza are arranged in a steaming basket or cooked in a pan using steam. The flavors of the filling become condensed, so their taste and the texture of the dough can be enjoyed together. When the dough is made from rice flour, it becomes translucent when steamed, and the ingredients can be seen through the dough, making the gyoza beautiful. 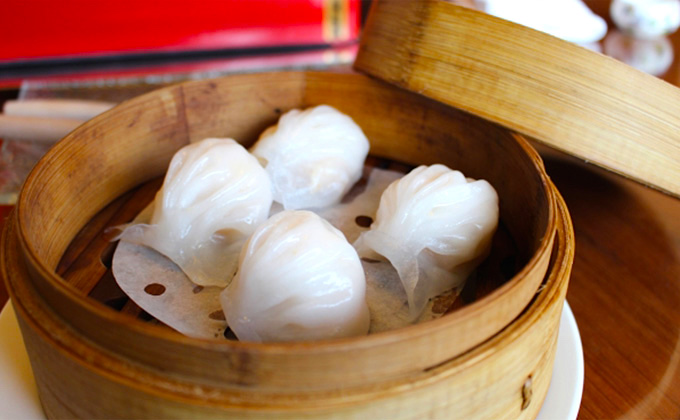 In Chinese dim sum, ebi gyoza are very common as steamed gyoza, but pork gyoza are more popular in Japan. Therefore, gyoza made from seafood, including shrimp, are distinguished from ordinary gyoza. There are two kinds of ebi gyoza: one is made from ordinary flour dough and the other is made using the translucent skin of dim sum dumplings. 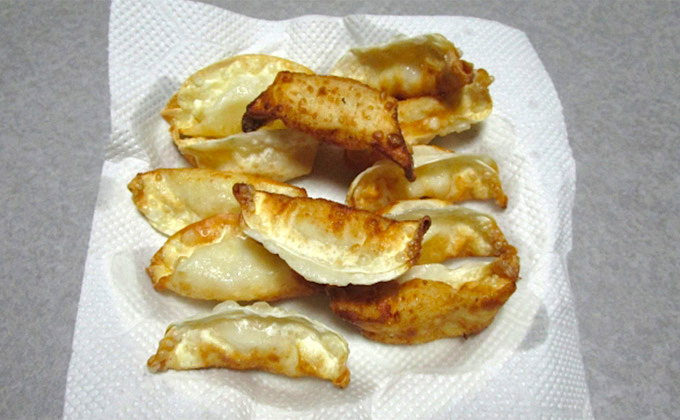 Age-gyoza offer a crispy texture because they are deep-fried crunchy in plenty of oil, at a high temperature. When cooled, age-gyoza still tastes delicious, so they not only make a good side dish, but can also be served for dessert. The fillings are made mainly from meat and vegetables like grilled gyoza and boiled gyoza, but there are deep-fried gyoza made from sweet ingredients, too, including fruit, sweet potatoes, red bean paste and more. 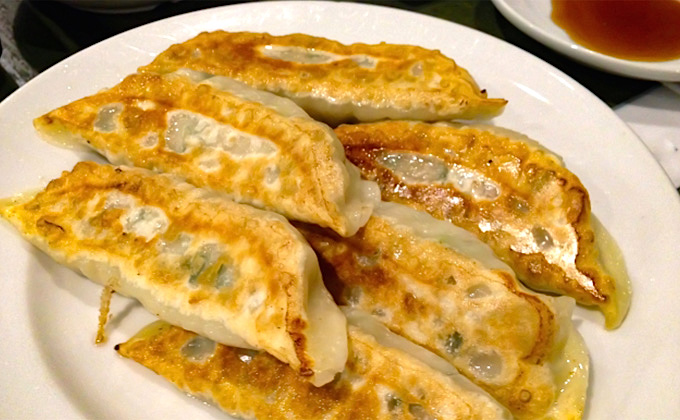 Fillings made from locally produced Chinese cabbages and garlic chives are wrapped in chewy dough and then pan fried, creating a refreshing taste which is easy to eat. Gyoza culture is rooted in Utsunomiya, to where many military personnel returned from Manchuria after World War II. 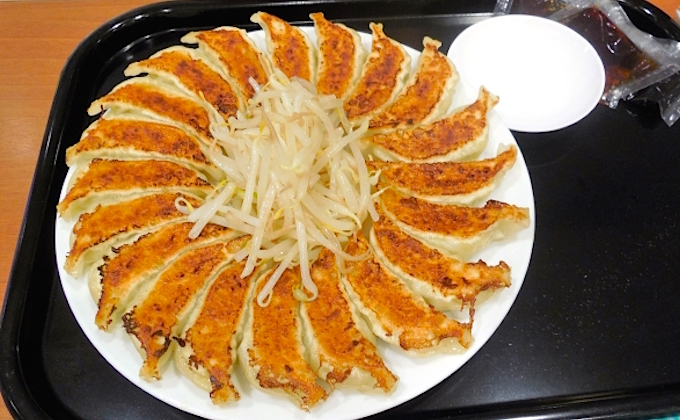 These are gyoza with a traditional taste made from local ingredients, including cabbage and pork. The light taste comes from the filling (plenty of cabbage), while the rich taste comes from the pork. Hamamatsu gyoza are grilled and arranged in a circle, with boiled bean sprouts often garnishing the middle 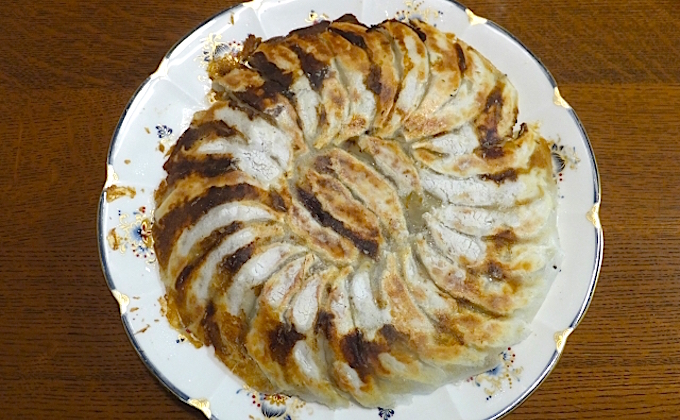 Fukushima gyoza are famous for the style of preparation, in which gyoza are arranged and grilled in a circle in the pan. These are called enban-gyoza (literally: disk gyoza). The fillings are rich in vegetables, and Fukushima gyoza feature a light taste and crispy texture. Many of these gyoza shops are open from the evening. 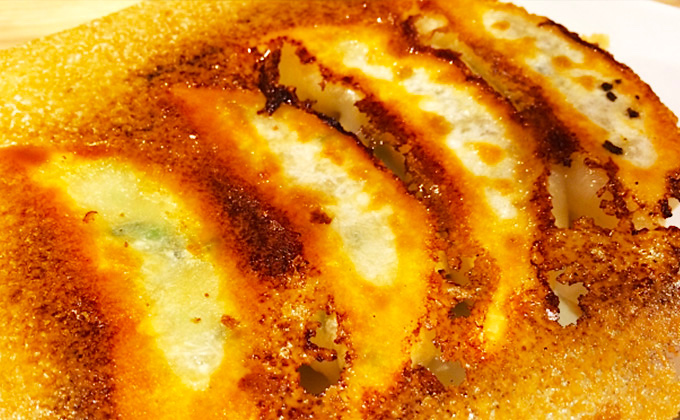 A water-based starch is poured to make a thin layer on the bottom of the pot, so that the gyoza are steam-cooked, and the thin layer of starch becomes crispy, connecting the dumplings. These are called “hanetsuki (winged) gyoza.”

Fillings center on pork, cabbage and garlic chives, so Kobe gyoza are one of the few varieties made without garlic. Pan-fried gyoza in Kobe feature miso bean paste sauce. They can be eaten with additional soy sauce, vinegar, chili oil, garlic, and whatever else is desired.

Hakata gyoza are also known as “tetsunabe (iron pan) gyoza”. Bite-sized gyoza are placed to cover the bottom of the pan and pan-fried crispy. These gyoza are served on an iron pan, too, so you may enjoy a freshly grilled dish because of the remaining heat.