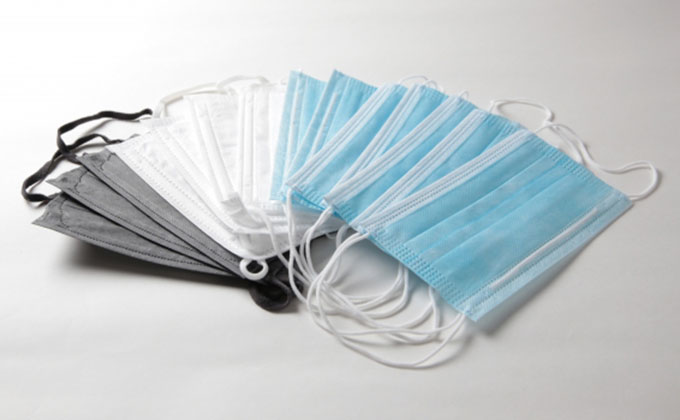 Japan was complimented by the WHO for its swift and effective curtailing of COVID-19. In the early stages of the pandemic, the country seemed to be doing something mysteriously right, then things went downhill. But, a 100-year long history of mask-wearing may be one reason why Japan quickly got back on track.

With 4.3 million disposable masks manufactured for personal use in 2018, Japan has definitely internalized the etiquette of being a good neighbor. Compared to the drama of Guthrie, Oklahoma, USA, where passing a masks-in-public ordinance resulted in Facebook rants and phone calls of fire-arm threats to the police station, most Japanese people don’t have to be fined in order to get them to wear a mask. By acting as if everyone has the virus, Japan has been able to, so far, curb the epidemic without massive testing that could further tax the medical system.

Three of the motivating factors that induce Japanese nationals to adhere are courtesy, obligation and shame. Courtesy is the willingness to act out of genuine concern for others. Obligation involves placing the needs of the group before those of oneself. Shame is fear of what others might think if one does not comply to group or societal norms.

Having a 100-year-long history of wearing masks helps, too.

An elaborate 3D style mask that included a copper wire mesh filter has been traced to 1879. Next came the status symbol masks made popular during the Spanish flu pandemic of 1918-1920.

As I had never worn a mask until moving here, I assumed they were a mostly-Japanese phenomenon and I wondered why the term used in Japan, “masuku,” sounded so close to the English word. Imagine my surprise when I discovered that the US had issued a Mask Order during the Spanish flu pandemic of the early 20th century.

Ironically, the US’s perceived mask-related success in controlling the crisis was a prime influence in Japan’s mask-wearing endorsement when domestic cases were discovered. Two separate Japanese newspapers, on two different occasions, published photographs of people wearing masks in the US.

In 1923, in the aftermath of the Great Kanto Earthquake, people in Tokyo and Yokohama wore masks to protect themselves from all of the ash and smoke. This is when Kotobuki Mask by Uchiyama Takeshoten became the first registered trademark product.

Manufacturing techniques continued to improve and changes, such as using celluloid for the wire base and leather or velvet for the cloth filter, were attempted. Just in time, too, for the second flu outbreak in 1934. This time, the Japanese government actively encouraged its citizens to wear masks on public transportation, in theaters, and any other place people gathered. This practice was reinforced to the point where those without a mask were sometimes barred from entry. Posters like “No Mask = Deathwish!” and newspaper ads depicting scenes of isolating the sick, mask-wearing in public and gargling at home were prevalent.

The timing was perfect, and the PR team was fantastic. They wed the mask to modernity and pitted it against folklore monsters embodying influenza. Compliers were many and masks became the go-to for protection any time there was an epidemic. This mentality has since seemed to serve the Japanese community well.

In order to disguise dirt or stains from repeated use, these early masks were black, brown or green at first. White gauze masks were first produced in 1950, as well as simple cloth ones (the flat mask) without a wire frame. These masks were not only a response to industrialization and its subsequent pollution, they were also used to combat the pollen from Japanese cedars that thrived off of the extra carbon dioxide.

In 1973, the pleated design made of non-woven fabric made its debut. Then came the “always fresh” disposable mask campaign of the 1980s. This decade saw an increase of masks used to combat hay fever and, along with their believed benefits in fighting illness, masks became a family staple. Improvements in style, including ways to relieve pressure on the ears and nose, as well as a feature to reduce lipstick smears, allowed the mask to maintain its popularity in Japan.

Though they can be touted as a protective agent against hay fever, dust and the spread of common cold germs through coughing and sneezing, technically, masks are not subjected to Japanese Pharmaceutical Manufacturing Laws and, therefore, may not be advertised as having “drug-like efficacy.” Manufacturers are also required to follow basic consumer guidelines, such as listing materials and any antimicrobial agents that have been used in their production. 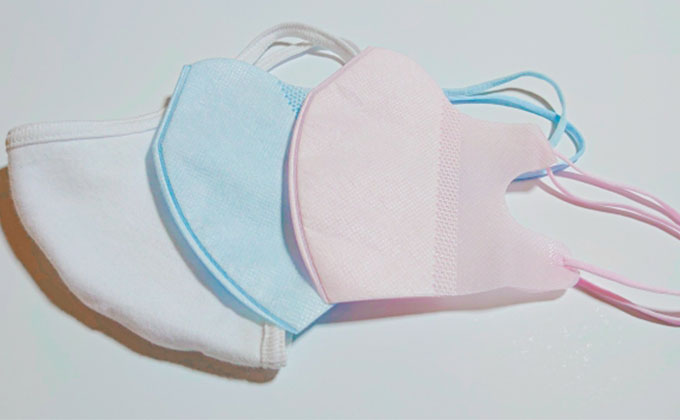 3D masks, introduced by Unicharm in 2003, stand away from the mouth to make breathing easier, and to keep makeup from smearing. They showed up just in time to combat the 2003 SARS and 2009 H1N1 influenza pandemics, which further increased the number of people in Japan who wore masks on a daily basis.

Since 2011, increased media involvement and celebrities have popularized masks even more, with appeals for beauty and fashion, as well as a way for shy people to “hide” from society.

The “Small-Face Mask,” first introduced in 2016, was ranked among the top ten masks for women in a 2018 survey  so that “your dream to have a smaller face will come true.”

Since then, a variety of “performance” masks, including one that heats up, one that repels odors, and one that blocks UV rays, have appeared on the market. Ones that are comfortable, even when worn for a long time have also been developed, as well as ones that come in colors to match your complexion: pink, beige, grey and brown. Japanese companies are now rushing to promote the “cool” mask, meant to combat the heat of summer combined with the obligation to slow the spread of COVID-19. 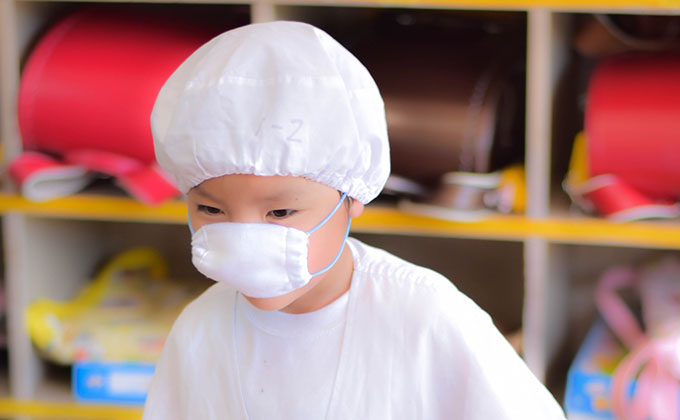 Kids in Japan serve the school lunches in predetermined groups that do it for a week at a time. Serving aprons and hat are supplied, but each child has a special mask bag in which they are required to bring a face mask from home on a weekly basis. I have always kept a box of masks in the linen closet and my kids help themselves. Unbeknownst to me, however, someone took the last mask, but left the empty box! By the time I realized it, the stores’ shelves were already bare.

With the mask shortage provoked by the coronavirus pandemic, many people have shown exceptional creative flair for DIY masks. Though I, too, made a few disastrous attempts, I am luckily surrounded by talented seamstresses who have kept my family well supplied in homemade masks. 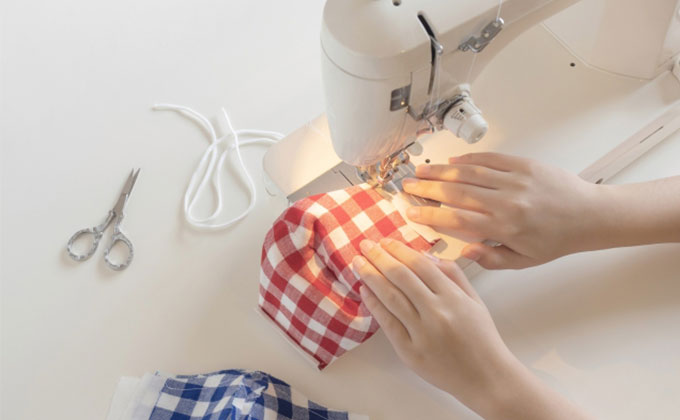 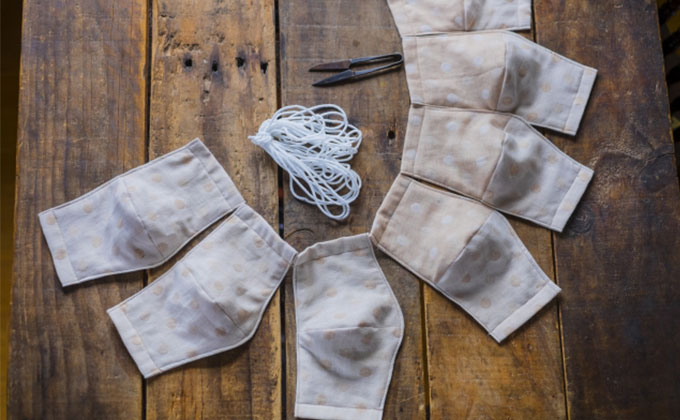 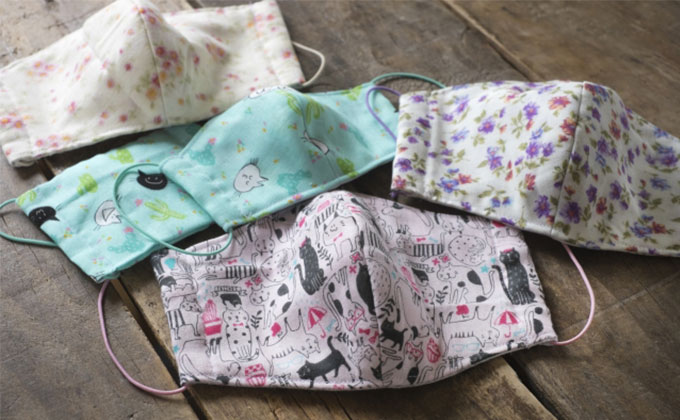 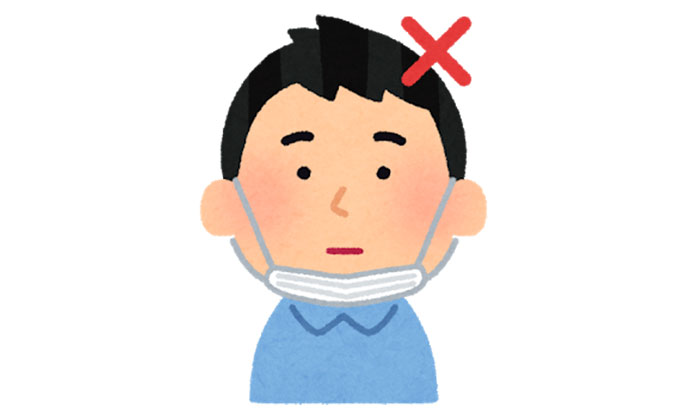 Personally, I have always been anti-mask, unless I have a cough and have to teach a class. But, I now carry one in my purse at all times and never enter a public space without putting it on. My daughter has used them to hide a blemish on occasion, but now wears one religiously in public. My oldest son hates them, says he can’t breathe. My middlest son wears his without complaint, and the baby has to be reminded not to wear his mask like a chin diaper.

▷Why Do the Japanese Wear Masks? (ejcjs)

Though it has branched out to incorporate fashion and anti-social behavior, the majority of people who wear face masks in Japan have always done it, and will probably continue to do it, for health reasons and out of courtesy for others.

The use of copper in Japanese masks made in the early Meiji period (1868-1912) has come full-circle in the race to create the perfect COVID-19 barrier. With its magnetic ability to trap these dangerous microbes, copper’s comeback as a mask material shouldn’t come as a surprise. What does amaze me, though, is that mask makers in Japan knew this over a hundred years ago.