Blissfully Barefoot or the Next Best Thing

I am so lucky! Not only is my husband the king of foot rubs, I work in an office where there are waraji on the slipper rack! No toe-squishing high heels for this gal. The #KuToo movement is not necessary in this fun-loving place of work, but that doesn’t mean that I don’t support it. In the land that has perfected tabi socks, jikatabi, zori and geta, it surprises me to see so many people stuffing their feet into fancy shoes that hold toes hostage! The policy of woman being required to wear high heels to work is definitely a non-starter and needs to be amended ASAP. 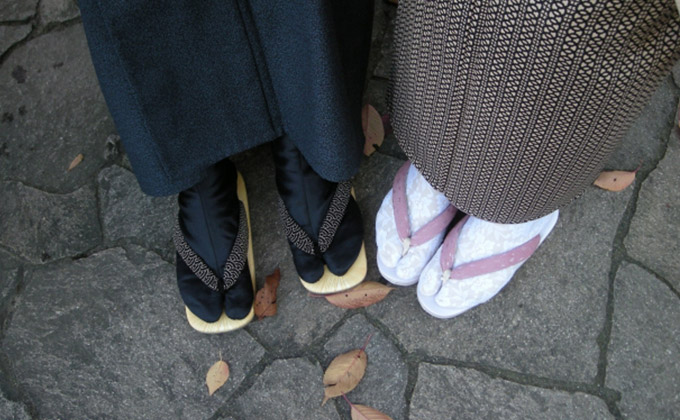 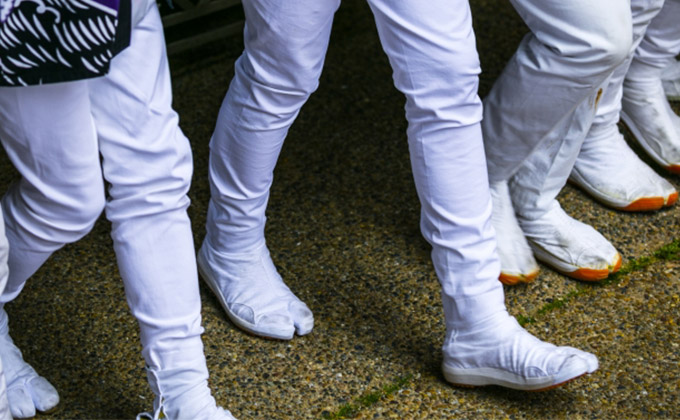 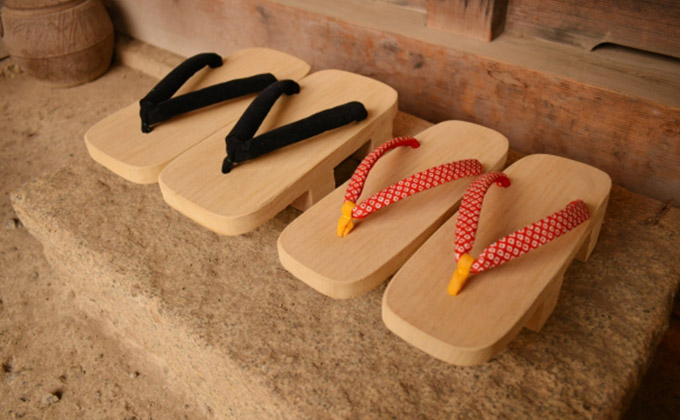 When I was a kid, I ran barefoot everywhere. I doubt I wiped off my feet before coming in, but since people wear shoes in the house in the States, my mother probably didn’t mind too much, as long as I washed off the doggie doo.

With my own kids, I encourage them to do the same, but am met with opposition from my mother-in-law, who passive-aggressively says things like, “Ooo, doesn’t walking on the rocks/pavement/grass barefoot hurt your feet!?” What she really means, but cannot say, is that she really doesn’t want them coming into her house with filthy feet! Rather than bristling at her remarks, I should be preparing a damp towel for the kids to wipe their feet on and assuring her that I will clean them up before letting them into her house. It only makes sense, especially with the tradition of removing one’s shoes in a Japanese home.

One time, though, my husband threw out his back. The hands-off reiki/masseuse/physical therapist who helped him looked carefully at his feet and said, “You should have played outside barefoot more as a child.” Well, if that didn’t give me some leverage with my mother-in-law!

Thanks to a flux in recent Facebook posts and shares, I am learning even more about the importance of kids playing freely outside: climbing trees, riding bikes, falling down, getting splinters, stepping in dog poop. Being barefoot, or almost barefoot, out-of-doors in general allows us to directly experience the outside world! These physical interactions with nature are touted as crucial in developing things like proprioception (knowing where you are in space and relation to your surroundings) and kinesthetic sense (movement of the limbs, like hand-eye coordination). The still developing brains and muscles of our children need ample opportunities to challenge themselves through free play in wide open spaces.

I don’t think it should be limited to kids, either. Adults, too, need time to walk on the beach, clamber over river rocks, and feel squishy mud oozing through our toes. Some say that the decline in proprioception is the reason elderly people often become unbalanced and have an increased tendency to fall.

I dance hula barefoot. The group I belong to is invited to dance at festivals a lot, especially in the summer, which means we get to be barefoot on the grass, or on a concrete platform, even on an asphalt street. While some members of our group balk at these conditions, more and more are realizing what a great opportunity it is to improve our pedal extremities. 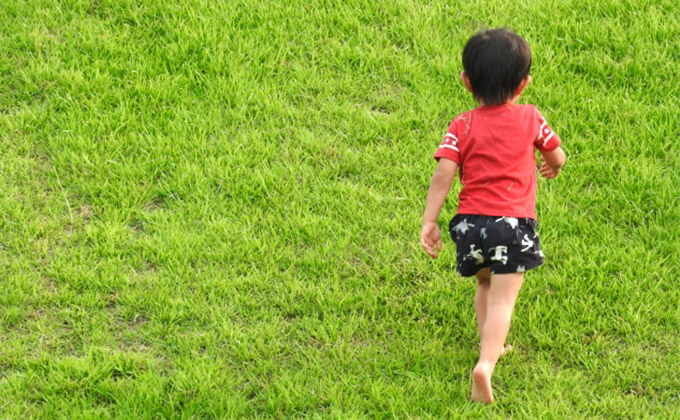 Preschools in Japan echo this sentiment! For some places it is a year-round policy, and in others it goes from June through August, but more and more nursery schools are implementing a barefoot policy, even in the winter! Unfortunately limited to the indoors, this effort to increase kids’ chances of direct exposure via their extremities is, nevertheless, a step in the right direction.

Maybe, though, you feel going barefoot as much as you want is not an option. Cue the next best thing to being barefoot: zori, the Volvo of flip-flops! Easy to slip on and off, Japanese zori separate the big toe from the other little piggies, and have a thin sole with natural fibers on top and rubber on the bottom for almost-perfect exposure to the elements. Even way back in 1981, in a New York Magazine article, Dr. Walter H. O. Bohne recommended wearing Japanese zori to correct conditions like hammertoe!

The Japanese seem to have been clued into the importance of separating the big toe from the little toes since the beginning of time. Somehow they knew it was necessary in order to maximize the strength of the foot, and to allow each of the many muscles in our feet to do its job. Zori, geta, jikatabi, waraji, all of these shoe designs divide the toes.

The Japanese etiquette of wearing socks in public could have caused problems for all of these toe separating shoes if there hadn’t also been tabi, Developed in the 15th century, these thong-like socks paved the way for stronger, boot-type footwear called the jika-tabi. 700 years later, they are still a thing!

Traditionally worn on a daily basis with kimonos, healthy-toe promoting tabi experienced a decline in popularity when kimonos became regulated to special occasions only. One place in Saitama (Japan) used to have 200 tabi manufacturers, and is now down to eight. Not content to sit and let the industry die completely, tabi-lovers made a deal between a local school and the city office. Each child would get four pairs of tabi to use throughout the school year, both for indoors and out. Surveys and studies would be conducted, with the results published for the benefit of the community. As you may have already guessed, many kids got hooked on having cloven hooves, saying the special shoes helped them improve their climbing, running and even basketball abilities. https://www3.nhk.or.jp/nhkworld/newsroomtokyo/features/20180116.html 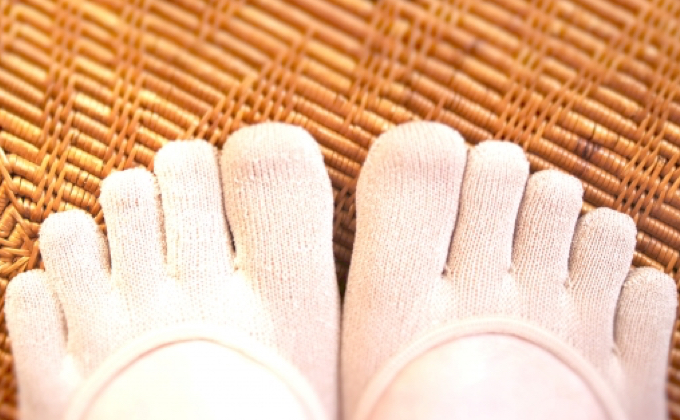 Now, how about something that takes toe separation to the next level: toe socks! Originally designed by Ethel Russell of Pennsylvania and popular in the 1970’s, toe socks made a comeback in the 1990s and are currently the sock of choice for many athletes (and even some astronauts!) round the world. Many Japanese people find them perfectly suited to their lifestyles, too, especially because of the humidity in Japan. And you can still effortlessly slip into your zori, geta, or jika-tabi. In the frigid, yet still damp, winters, too, a layer of toe socks to wick up moisture followed by a layer of regular socks, or woolly tabi socks (so that you can still slip into your waraji at work), can keep you cozy and dry.

According to Time’s notes for healthy footwear, the number one recommendation is shoes that allow you to be as close to barefoot as possible. This state is when your feet can most take advantage of their combined over 100 muscles, making them stronger and essentially protecting you from injuries. Number two says your piggies need to be able to wiggle.

Other guidelines include support, cushion and overall fit (including both length and width), which could easily be achieved with a combination of traditional Japanese footwear.  And the nemesis of healthy feet, despite their fabulousness in small amounts?   You guessed it: high heels! Nicola Thorpe and the #KuToo movement know what they are talking about. Now, everyone get your geta on!